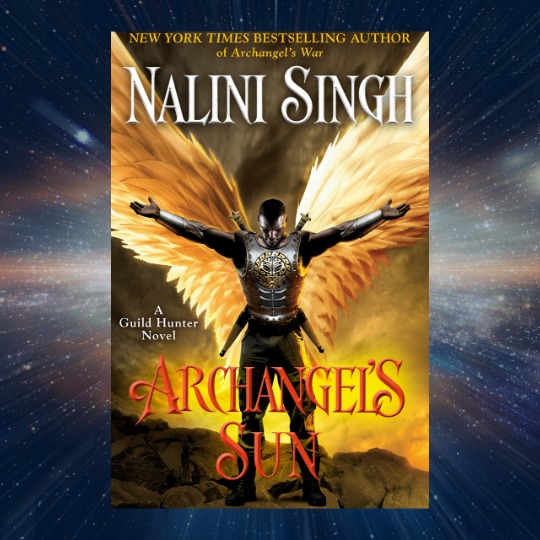 We are so excited to bring you this exclusive excerpt of Archangel’s Sun by Nalini Singh! 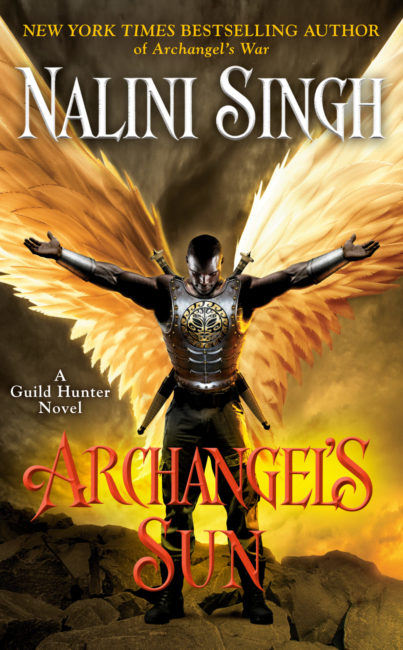 The Archangel of Death and the Archangel of Disease may be gone but their legacy of evil lives on—especially in Africa, where the shambling, rotting creatures called the reborn have gained a glimmer of vicious intelligence.

It is up to Titus, archangel of this vast continent, to stop the reborn from spreading across the world. Titus can’t do it alone, but of the surviving powerful angels and archangels, large numbers are wounded, while the rest are fighting a surge of murderous vampires.

There is no one left . . . but the Hummingbird. Old, powerful, her mind long a broken kaleidoscope. Now, she must stand at Titus’s side against a tide of death upon a discovery more chilling than any other. For the Archangel of Disease has left them one last terrible gift. . . .

“You fight a difficult battle, Titus. I offer what assistance I can.”

Spotting the increasing dip in her wings, he chose against giving her an overview of the citadel. “We’ll land on the balcony outside your suite,” he said. “It’s near mine so you can access me at any time should you have any need.” That wasn’t quite true. He’d be out in the field more often than not. But it seemed like the sort of thing an archangel should at least say when the Hummingbird stayed in his home.

It wasn’t anything he’d ever before had to consider. With the entire gentle court sent to safety prior to the beginning of the war, he had no one soft and sweet left on his staff to handle such things. Elia, six-hundred-year-old vampire and foster mother—by choice—of the orphaned children who lived in Titus’s court, would’ve no doubt managed it all with smiling joy, Titus none the wiser of the work involved.

He wasn’t a complete dullard in such things however—there was a reason he’d offered Elia a position as senior courtier. She might be kind of heart and prone to dressing in frothy fashions while putting enormous amounts of cosmetic colors on her face, but she also gave his steward a run for his money when it came to dealing with problematic or touchy guests.

However, his steward was currently using his sword arm against the reborn, and Elia was on an offshore island with her charges; he’d had to pull people from other duties to ready things for his guest.

Members of his household staff were so honored by the Hummingbird’s visit that they hadn’t minded pulling double shifts to pretty up a suite for her while not falling away from their usual duties—whether that be repairing weapons or feeding the troops or a million other critical tasks.

After landing on the balcony and ensuring the clearly exhausted Hummingbird got down safely, he pushed aside the gauzy curtains of the open doors—to see soft, curving feminine furniture and vases full of fresh flowers. Thanks be to the ingenuity of his people; he had absolutely no idea where they’d found those blooms.

“I hope this will suit,” he said modestly after they’d both stepped inside—but the modesty was for show; he was very conscious his people had done well and deserved all the praise she would bestow.

Expression tight, she looked around. “I didn’t expect you to go to this trouble.” A tone to her voice that, on any other woman, he would’ve described as an edge. But this was the Hummingbird. Perhaps she was displeased about some small element of the room.

Having known more than enough contrary women over his lifetime, beginning with his mother and sisters, Titus decided to leave well enough alone and didn’t ask her what was wrong. “My staff is honored by your presence and wished to make you welcome.”

Features softening, she inclined her head. “I’m deeply grateful for their care.”

“I’ll be sure to pass that on.” Titus wasn’t a man to steal praise that wasn’t his to take. “I made sure to remind them to set up an art studio for you,” he said with justifiable pride, and pointed upward. “You’ll find stairs just beyond the half wall to the right—at the end of the climb is a room full of light set up with an easel and art supplies.” He had no idea where his people had sourced any of those things, either.

When the Hummingbird said nothing in response to his magnanimous gesture, he decided to take his leave. Could be this was one of those moments where she existed out of time. Though . . . for an ethereal being, her jaw appeared unnaturally rigid and he could swear that her shoulders were bunched.

No, he had to be imagining it; the Hummingbird was beyond such things. Beyond anger, beyond petty grievances. The Hummingbird was a being special and gentle, a being who needed care and was to be handled as you would a fragile, broken bird.

Sharine glared at the wide sweep of Titus’s back as he strode out of the room, shutting the door behind himself. It was as well that he’d left because she might’ve otherwise given in to the urge to pick up the small vase on the table next to her and throw it at his head. And what exactly would that have achieved? Nothing.

Titus—a warrior tired from constant battle—had done nothing but be kind and treat her as he no doubt believed she expected to be treated. As a fragile artist who needed beauty and softness around her and could not be expected to cope with harsh reality.

Well, was that not who you were for centuries?

It was a slap hard and stinging from a part of her that had woken when she’d woken, a part that was brutally honest and had no time for self-pity—or for misdirected anger.

How could she expect Titus to treat her as anything but a delicate, breakable butterfly when that was all she’d ever shown the world?

She and the Archangel of Africa hadn’t known each other when she was still herself—and even then, she’d been slightly out of time, a wounded bird who’d never quite found her wings. This Sharine, the one she was now, a mature woman shaped by loss and hurt and pain and anger and a fierce love for her son, she was someone Sharine herself was still getting to know. She couldn’t expect Titus to divine her new state of being.

Still, she scowled at the curvy velvet sofa, the lush bouquets of flowers, and—when she opened the wardrobe—the floaty and superbly impractical gowns within. Not only had a member of his overworked staff wasted time in getting all this together, it was clear that no one—from the archangel down to his most junior member of staff—expected her to dirty her hands.

Titus’s people were ready to take on another burden at a time when they needed every bit of help they could get. Making a sound low in her throat that startled her with its feral nature, she kicked the door of the wardrobe and was satisfied by the loud sound.

From ARCHANGEL’S SUN published by arrangement with Berkley, an imprint of Penguin Random House LLC. Copyright © 2020 by Nalini Singh.

Nalini Singh is the New York Times and internationally bestselling author of the Psy-Changeling and Guild Hunter paranormal series as well as contemporary romances and thrillers. Her books have been translated into more than 20 languages. Singh was born in Fiji and raised in New Zealand, and her extensive travel around the world has informed and inspired the writing of her novels.  She lives in New Zealand. Connect with her online at nalinisingh.com, Facebook.com/AuthorNaliniSingh, Twitter.com/NaliniSingh, and Instagram.com/authornalinisingh.

Where Romance and Pop Culture Live Happily Ever After.
All Posts
PrevPreviousTrope Rec Tuesday: Hades and Persephone, Part 2!
NextSharina Harris and Denise Williams Bring the Love!Next