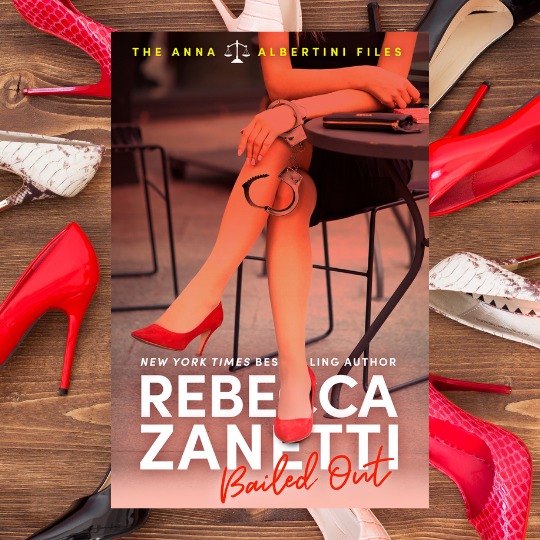 We are so excited to bring you this excerpt of Bailed Out by Rebecca Zanetti! 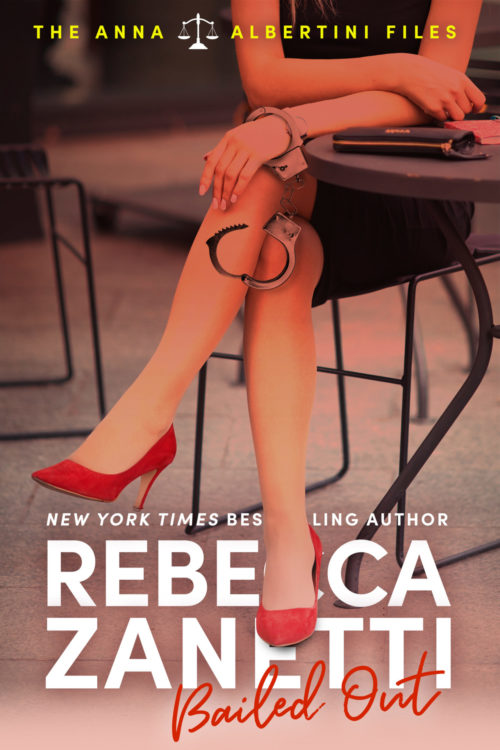 Anna Albertini is settling into a routine while ignoring the fact that the blue-eyed Irishman she’d allowed into her bed has up and disappeared on her. Two weeks without a phone call is no big deal, but still. With her hottie Italian boss goofing up the prosecuting attorney’s office, she at least has something to fix. Until she appears in court, across from her sister Tessa’s dirtbag ex. Then she has a mission.

Unfortunately, Anna isn’t the only person who wants the ex put behind bars…or in the ground. Which is not a problem until she and a local cop find the ex-boyfriend deader than dead…with both her sister and Aiden standing over the body.

As a prosecuting attorney, it’s Anna’s job to build a case against Tessa and Aiden. As a sister, it’s SO her job to get Tess out of this mess. As Aiden’s…what? Lover—girlfriend—friend from the past—it’s Anna’s job to figure out who the heck he really is. She has to dig out the truth, regardless of her ambitious boss or the cranky cop trying to thwart her every move. Sometimes a woman has to take matters into her own hands, regardless of the consequences.

After about fifteen minutes or so, I went into the bedroom to check on him. Aiden lay on my bed on his stomach, his arm flung out, bandages from my medicine cabinet across his neck. His torso was bare and led to his phenomenal butt in boxer-briefs. His shoulders were wide, his waist tapered, and his entire bruised body one belonging to a badass. His black hair was wet and combed back, already curling over his ears.

I sighed, my heart doing a flippy odd thing it only did for him.

Even his bare feet were somehow sexy and masculine. His face was half snuggled into the pillow and half facing the sliding glass door, his eyes were shut, and he breathed evenly.

How did you get a guy out of your heart when he looked like that? When he’d saved your life more than once?

I left the room and shut down the cottage for the night, making sure all of the doors and windows were locked. The A/C was on, so I left the windows closed, considering somebody had rammed a car into the guy in my bed.

Said guy didn’t move while I got ready for bed. The air conditioning kicked on as I slid beneath the covers, nudging him in the shoulder. “Aiden. Get under the covers.”

He mumbled something, rolled over, and slid beneath the sheet. In a move I was hoping he’d make, he tugged me into his body and spooned around me. His sent of leather, oil, and male surrounded me along with the oddest sense of Ireland. Of rolling hills and wild ocean crests.

“Tomorrow we are talking,” I murmured, meaning it as my eyelids closed.

He placed a soft kiss behind my ear, and the damn sensation shot right to my heart.

Rebecca Zanetti is the author of over fifty romantic suspense and dark paranormal romances, and her books have appeared multiple times on the New York Times, USA Today, Amazon, Barnes and Noble, and iBooks bestseller lists. The New York Times reviews has found that in her books, “humor surfaces in even the tensest moments, giving the high-stakes drama humanity and warmth.”  She lives in the wilds of the Pacific Northwest with her own Alpha hero, two kids, a couple of dogs, a crazy cat…and a huge extended family. She believes strongly in luck, karma, and working her butt off…and she thinks one of the best things about being an author, unlike the lawyer she used to be, is that she can let the crazy out.