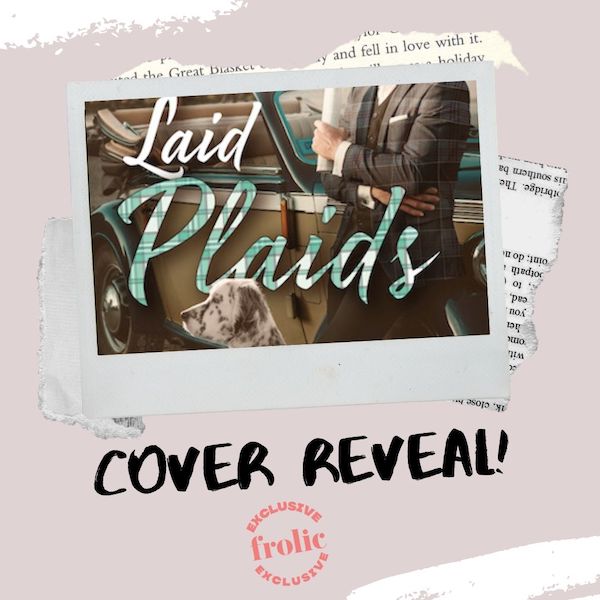 Note From the Author:

Thanks so much Frolic for hosting the cover reveal and excerpt from my debut novel Best Laid Plaids coming in August, 2020. It’s the first of my KILTY PLEASURES 3-book series from Carina Press.

Fingers crossed that you enjoy the road trip through 1920’s Scotland with depressed cinnamon-roll Joachim Cockburn as he does his best not to fall head over heels for ADHD and anxiety-riddled eccentric genius Ainsley Graham. It’s perfect for readers who like adversaries (not quite enemies) to lovers, forced proximity (and even a “only one bed at the inn” scene), nerdy—but OMG spicy!—M/M historical romance.

Read on for an exclusive excerpt of Best Laid Plaids. 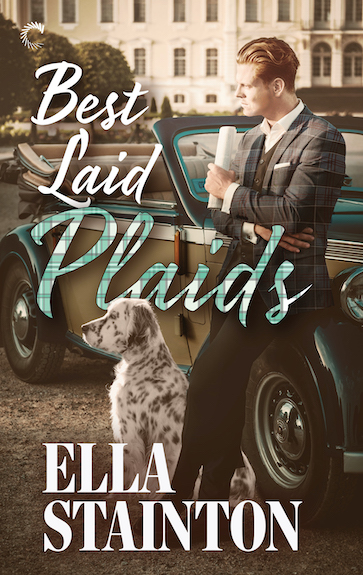 Dr. Ainsley Graham is cultivating a reputation as an eccentric.

Two years ago, he catastrophically ended his academic career by publicly claiming to talk to ghosts. When Joachim Cockburn, a WWI veteran studying the power of delusional thinking, arrives at his door, Ainsley quickly catalogues him as yet another tiresome Englishman determined to mock his life’s work.

But Joachim is tenacious and openhearted, and Ainsley’s intrigued despite himself. He agrees to motor his handsome new friend around to Scotland’s most unmistakable hauntings. If he can convince Joachim, Ainsley might be able to win back his good name and then some. He knows he’s not crazy—he just needs someone else to know it, too.

Joachim is one thesis away from realizing his dream of becoming a psychology professor, and he’s not going to let anyone stop him, not even an enchanting ginger with a penchant for tartan and lewd jokes. But as the two travel across Scotland’s lovely—and definitely, definitely haunted—landscape, Joachim’s resolve starts to melt. And he’s beginning to think that an empty teaching post without the charming Dr. Graham would make a very poor consolation prize indeed…

A snorting, humid press against Joachim’s prick had him open a bleary eye. A tearing noise that screeched through his consciousness was coupled with unbearable brightness. Draperies? He struggled to sit up on the slippery sofa and rubbed the heels of his hands into his temples.

He squinted against the intrusive light and needed something to scrub the wooly jumpers from his teeth sooner than later. But coffee. A bucket of coffee before anything else.

Joachim’s head flew back, nearly snapping his neck and adding to the agony of his aching body. Flailing his arms, he was unable to fight off the unpleasant breath pumped into his nose like bellows from Hell. Violet.

A lick across his lips was the last thing he felt before forcing his eyes wide. “Get off me.”

“You snore. Like a locomotive. I can’t imagine anyone comes back to your bed a second time.” Sharp, rude. Accusatory.

Pushing the setter’s hairy chest—much too close for comfort—Joachim struggled to his feet. “Get off.” He was louder that time. Much more authoritative.

“Violet dear, heel.” Ainsley’s voice was as dry and haughty as it had been the night before when he’d left. The dog retreated and her toenails clicked across the bits of hardwood not covered by scatter rugs.

Gracious, was it already morning? Joachim scanned for a clock and found one on the mantel. Quarter past eight. And he’d slept in his shoes. He’d had the wherewithal to remove his tie and jacket and…good Lord; his shirt even. But not the bloody shoes. Damned whiskey.

He looked behind him and scowled. Backlit, he was unable to make out anything but the form of Graham…not wearing very much clothing? He held his breath for a few heartbeats.

Thank God the man wasn’t completely naked. He still wore his kilt, though the sporran was missing, along with the shoes and socks and everything above the waist. He stalked toward the hallway, slim, but each of the muscles in his back was defined. Well defined.

“I hope you’re not a prude, Cockburn?” Ainsley smirked, fingers on the buckle of his kilt.

Joachim did his best to swallow and failed. “A…a prude? Er…no. I’ve not been called—” But his voice stopped working as Ainsley stepped over the kilt now puddled on the floor.

It seemed Graham was a traditionalist when choosing whether or not to wear flannels underneath his native dress.

“Do you drink coffee? You look as though you need some.” Ainsley crossed his arms over his chest and shifted to his back leg, which was turned at a forty-five degree angle from the other with at least a half a foot in between. Making an absolute display of himself.

With well-deserved confidence, to be honest.

Clearing his throat, Joachim said, “Coffee? I’d love some, thanks.”

Ainsley’s eyes were doing some traveling south on their own and Joachim’s face heated.

“Like your beard.” Ainsley rubbed his biceps slowly, two fingers on each hand.

Joachim tilted his head to the side, entranced by the sight. “Pardon?”

“Your chest.” Ainsley’s hand went to his own chin, scratchy with golden-red stubble, and then skimmed lower until it ran across one of his nipples. It puckered under his touch.

Fucking hell. Joachim sat before the tenting in his trousers was obvious.

Ainsley’s eyes crinkled up. But instead of his usual mocking, he turned—exhibiting what was probably the most perfect round arse in Scotland—and strolled down the hall, out of sight. “Aren’t you coming? I’m not planning on serving you, am I?”

Rubbing the crick out of the back of his neck, Joachim stayed put. Repeated the Lord’s Prayer thrice through before he was comfortable enough to follow, and leaned on his walking stick heavier than usual. He’d simply keep his eyes at shoulder level or above and nothing to worry about.

Ainsley, however, still struggled to light the stove five minutes after he’d disappeared to make coffee. He mumbled under his breath about someone named Hugh.

Looked like Ainsley had gotten his wish. Good God, why did that sting so much? Joachim sighed as he took the box of matches and had the gas lit in a moment.

His host shrugged. “Honestly, I’m unsure how coffee gets into the pot, but perhaps you have an idea?”

And still orchestrating everything to his whim, the bastard. The dog nosed Joachim’s crotch again. Why did dogs do that?

Ainsley sighed with excessive melodrama. “That’s not for the likes of us, Violet, girl; we’re not his type. Heel.”

Joachim ignored him, and ran his hand across the silky head of the dog. He found the coffee and the press and measured it out with a spoon. The kettle boiled and he had eggs frying and toast warming while Ainsley stayed somewhere out of his vision. Thank Christ.

Ten minutes later, they had breakfast on plates and the steam from the coffee swirled up his nose.

“I was foolish to have sent the staff out until eleven,” was the thanks he received.

“Speaking of the lack of staff, should I make a plate for your father’s breakfast?” The old man hadn’t reemerged from the back room all evening.

“My father?” Ainsley’s face went all rumpled and bewildered. And then he laughed. “You do know how to ruin a mood, don’t you, Cockburn? He’s been dead for years.”

Dead? “Then you’ve got someone in your house impersonating him.”

Ainsley wrinkled his forehead even harder. “Sounds like you had too much to drink last night.”

Hmm. Something pricked the back of Joachim’s still-hazy mind. He’d been lushed out of his skull, all right. An entire whiskey and a half and then gulped down that red wine. Perhaps he’d seen a photograph in the collection on the bookcase? Surely that was it.

Though that was unsettling, to be honest. The conversation had felt so real. 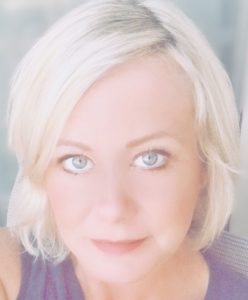 Ella Stainton teaches history’s scandals to teenagers near Richmond, Virginia. She’s lived in most Mid-Atlantic states where you can catch blue crabs, as well as four years in Sweden, and a year in Scotland (where she visited lots of haunted castles with her scientist father). She doesn’t mind eating Ramen all year if it means she can hop on a plane during summer break, and has visited around 30 countries. Which equals a lot of Ramen. Ella has four fur babies and four without fur (or children, as she likes to call them). She particularly likes ’80’s Eurotrash synth music, glitter eyeshadow, and men in kilts. Even better if they are all three together.

Connect with the Author:

Where Romance and Pop Culture Live Happily Ever After.
All Posts
PrevPreviousDaily Frolic: Anna and Kristoff’s Wedding
NextLet’s LIFT for Autism 2020!Next