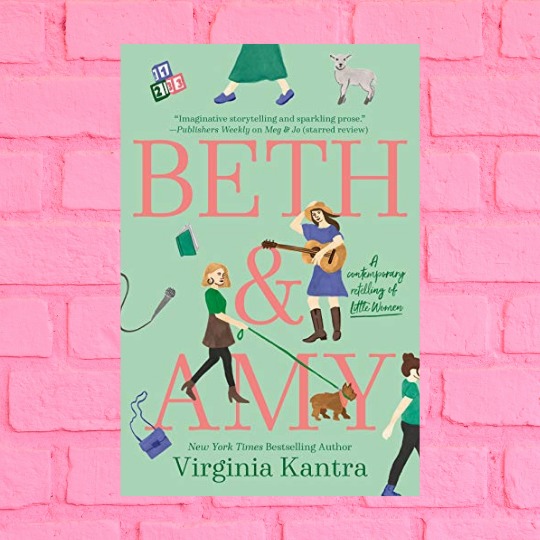 We are so excited to bring you this exclusive first look at Beth & Amy by Virginia Kantra! 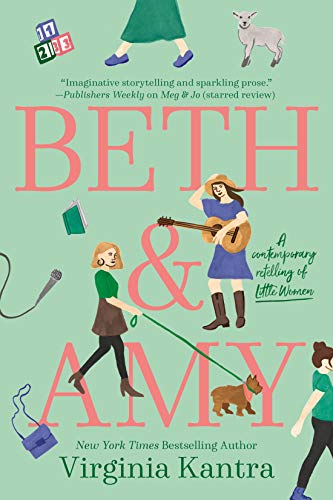 Amy March is more like her older sister Jo than she’d like to admit. An up-and-coming designer in New York’s competitive fashion industry, ambitious Amy is determined to get out of her sisters’ shadows and keep her distance from their North Carolina hometown. But when Jo’s wedding forces Amy home, she must face what she really wants…and confront the One Big Mistake that could upend her life and forever change her relationship with Jo.

Gentle, unassuming Beth grew up as the good girl of the family. A talented singer-songwriter, she’s overcome her painful anxiety to tour with country superstar Colt Henderson. But life on the road has taken its toll on her health and their relationship. Maybe a break to attend her sister’s wedding will get her out of her funk. But Beth realizes that what she’s looking for and what she needs are two very different things.…

With the March women reunited, this time with growing careers and families, they must once again learn to lean on one another as they juggle the changes coming their way.

My sandals tapped and echoed on the polished pine floor. “ . . . have a responsibility,” Phee was insisting as I came down the hall.

“Not anymore.” My mother’s voice was flat.

I blinked. Abby March was all about taking responsibility.

“He’s still your husband,” Phee said, and my stomach sank.

They weren’t talking about the wedding. They were arguing about Dad. I pasted a smile on my face and pushed open the door. “Hey, Momma,” I said brightly. “Hi, Aunt Phee. Am I interrupting?”

Phee glowered. She and my mother faced off across the library desk. My mother’s hands and lips were pressed together, a sure sign she was angry. But she smiled when she saw me.

“Hey, sweetie. What are you doing here?”

Like I needed another reason to feel de trop. I felt my smile slipping and dragged it back. “I thought I’d come in early. To help.” I gave Momma a quick hug before going around the desk to kiss Phee’s cheek. The little dog in her lap growled.

“What about your work?” my mother asked.

“Flo’s handling orders while I’m gone. That’s the advantage of owning your own business,” I said. “I can take time off.” As long as I paid for the extra help and checked in three or four times a day.

If my mother was impressed by my entrepreneurship, she didn’t show it. “Jo doesn’t want a lot of fuss.”

Don’t fuss was our mother’s motto. I pictured it embroidered under an imaginary coat of arms: two goats on a green field, with a pricker bush.

“I thought I could help with the flowers,” I said.

“What about table arrangements?”

“I’m picking up flowers when I go to the farmers’ market on Saturday.” Something must have shown in my face, because our mother added, “You could arrange those. You did such a nice job for Meg’s wedding.”

Phee sniffed. “You want to make yourself useful, you can take Polly for a walk.”

I eyed the bad-tempered Yorkie on her lap. The dog didn’t seem any more excited at the prospect of a walk than I was. But I was obviously in the way here. Besides, our family owed Aunt Phee. She had paid for my postgraduation trip to Europe. She had opened her home to Dad. And she was doing such a generous thing for Jo and Eric, letting them have the wedding here. Letting them have Oak Hill.

Hm, I thought as I clipped the lead to Polly’s collar. I wasn’t jealous. Exactly. But if Phee was going to invest in her great nieces, why not me?

Polly and I meandered toward the duck pond, the little dog stopping frequently to sniff. The sun sparkled on the flat water. A faint breeze rippled the surface, stirring the reeds at the water’s edge, loosening a shower of petals from the nearby apple trees. All the scene needed to be perfect was Colin Firth in a wet white shirt. In spite of the smell of pond decay.

Polly growled and quivered. A family of Canada geese was browsing on the bank, the adults standing at attention over five little goslings.

“Don’t even think about it,” I told her sternly. “They’ll eat you for lunch.”

Polly snorted and busied herself with a stick. Let her. I didn’t care if she made herself sick.

While Polly rootled at the ground, I contemplated the azaleas, wondering how long the blooms would last if I cut some branches to use in wedding arrangements. A burst of yapping grabbed my attention. Polly tugged against my hold on her leash. There was a squawk. A honk.

I looked. Polly had seized one of the goslings by the neck and stood with her struggling prize on the bank, triumphant and seeming slightly bewildered by her success.

Shit. I started forward. But not before Momma and Poppa Goose lunged, necks outstretched, black beaks open and hissing.

Wild-eyed, the dog obeyed. Or maybe the gosling freed itself. Peeping in distress, the bird ran for its mother. But it was too late. As Momma Goose shepherded her baby to safety, Poppa attacked.

Polly yelped and stumbled under the rush of the bird’s wings, tumbling into the water.

The goose paid no attention, fixing its beady eyes menacingly on the dog.

Crap, crap, crap. I ran into the pond, my sandals sinking in the muck, and scooped up Polly. The Yorkie bit me, drawing blood. The indignity of it—after I’d rescued her, the little monster!—slapped my senses. The goose advanced on us, hissing, head moving side to side like a snake’s. I clutched Polly to my chest.

And then, apparently deciding I wasn’t worth it, the big bird folded its wings and launched past me, rejoining its family in the center of the pond.

The ripples faded in its wake. I stood there, dripping and shaking with shock. In my arms, Polly shook, too.

“I thought I heard a commotion,” said Trey’s voice.

I swayed. I was hallucinating. Unless . . . I turned. Nope. There he was, in the flesh, on the bank, golden-skinned and lean and perfect, the only boy I’d ever loved.

Of course he would show up now, I thought. When I was wet, muddy, and bloody. At a total disadvantage. History repeating itself.

Our gazes locked. “Little Amy.” He smiled crookedly. “I should have known it would be you.”

My vision grayed. And I realized two things.

One, I was quite possibly going to faint.

And two, I wasn’t over him after all.

New York Times bestselling author Virginia Kantra is the author of almost thirty novels. She is married to her college sweetheart, a coffee shop owner who keeps her well supplied with caffeine and material. They make their home in North Carolina, where they raised three (mostly adult) children. She is a firm believer in the strength of family, the importance of storytelling, and the power of love.

Where Romance and Pop Culture Live Happily Ever After.
All Posts
PrevPreviousIndependent Bookstore Day Brings Romance to the Forefront
NextBuzzy Contemporary Romance Picks for AprilNext