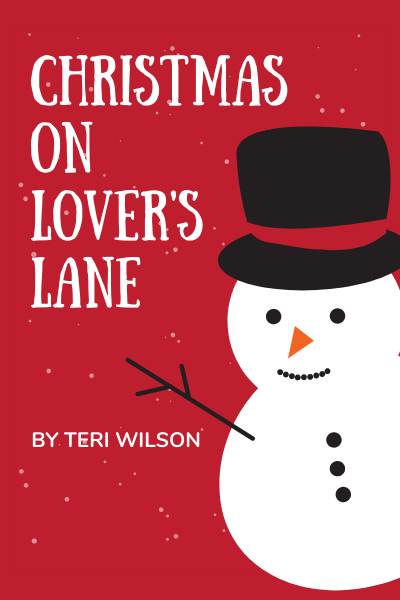 [Note from Frolic: We are so excited to bring you the third chapter of Christmas on Lover’s Lane, an exclusive short story from USA Today Bestselling Author Teri Wilson. She’s whipped up a super sweet Christmas story for you all. Check back tomorrow and all week for further installments!]

It’s been four hours since Nick relented and plopped down into the red velvet chair that I dragged out of the storage room last night in preparation for today’s festivities. I’ve been flitting back and forth from the cash register to Santa’s throne all day, snapping pictures with customers’ cell phones as they pose alongside Santa Paws and their various cats and dogs. We even had a rabbit—a first in the history of the Tasty Treats Christmas Eve extravaganza.

Although, like everything else around here, the party is more of a one-woman show than a true extravaganza. Except for Charm, of course. And Nick…for today, anyway.

“Smile, Santa Paws!” I say as I look at him through the lens of an iPhone. He’s got a Chihuahua in each hand and a barely discernible grin on his face.

I snap a few photos, and then a large orange tabby cat takes the place of the Chihuahuas. While the kitty burrows into Nick’s lap, I ring up a purchase then dart back toward the chair to play photographer again.

Nick’s gaze seems to bore into mine through the screen of the phone in my hand. I look up from the device and meet his gaze full-on.

I’m so surprised that I nearly drop the phone but manage to recover and take a succession of pictures that are probably blurry. My hands are shaking.

Why are my hands shaking?

I can’t think about it. There’s no time. The line for Santa Paws extends halfway across the room, and there’s a customer waiting at the cash register for me to write her dog’s name in frosting on one of my special homemade holiday dinner dog bones. Charm peers at me through the window of her doggy door, probably wondering why it’s taking me so long to snap a simple photo.

“Here you go,” I say to the tabby’s owner. “I think I got some cute ones. Merry Christmas!”

“Merry Christmas. Thanks so much for doing this! Linus and I look forward to it every year.” She shoves a handful of dollar bills into the ginger-jar on the table beside Nick’s Santa throne.

I shook him a warning look. Santa Paws does not make fun of pet names. Surely he knows this.

Linus’s owner beams at him.

Nick seems sincere, but I can’t be certain. We are, after all, talking about the man who almost refused to let me shove a pillow under his red Santa coat—as if I would have taken no for an answer. He’s supposed to be a sweet, (unofficially) jolly Santa, not hot Santa.

Still, bit-by-bit, he seems to thaw as the day progresses. When closing time approaches and he poses for a photo with his last visitor, a three-legged Golden Retriever mix named Max, Nick even looks a little emotional.

Are my eyes deceiving me? Is Nick getting teary-eyed over the sight of a differently abled dog?

I go a little weak in the knees. Even Charm lets out a dreamy sigh from her dog bed in the cash register area.

“You know dogs can get around perfectly fine on just three legs,” I say after the Golden and his owner have left.

“I know they can,” Nick says, narrowing his gaze at me.

“You don’t have to pretend. There’s no one here but us.” I wave my arms around the empty bakery. “You’re secretly a big softie, aren’t you?”

“I have no idea what you’re talking about.”

Charm emerges from her doggy door, trots right past me and leaps into Nick’s lap. The little traitor.

“You got misty-eyed when you posed with the three-legged dog,” I say. Then before I can stop myself, I add, “It was actually kinda cute.”

Now that I’m getting a closer look at him, I notice his eyes are still puffy. More than a little bloodshot, too. Who knew he was hiding such a sensitive soul beneath his thick veneer of cynicism and the fake Santa beard?

“I wasn’t crying. My eyes are watering because I’m allergic to cats,” he says flatly.

Charm glances back and forth between us.

“What?” My mouth falls open.

I think about the Abyssinian. And the orange tabby. And the plethora of other felines that crawled over him today. It’s snowing like crazy outside, and the pharmacy around the corner closed hours ago. I’d better have some Benadryl around here somewhere.

“That’s why I tried to leave earlier.” Nick’s mouth hitches into a smug half-grin. “But it’s good to know you think I’m cute.”

Where Romance and Pop Culture Live Happily Ever After.
All Posts
PrevPreviousNancy Johnson and Pat Simmons Bring the Love!
NextExclusive: “One Great Lie” and Repackaged “Girl, Unframed” by Deb Caletti Cover Reveals and Q&A!Next