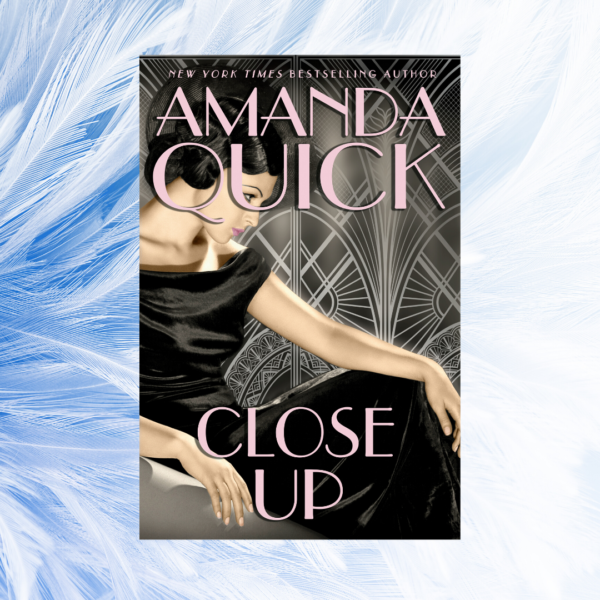 Who doesn’t know the name Amanda Quick? She’s been synonymous with the world of romance for decades. Some of my earliest historicals were by her, and they remain beloved to this day. So I am very excited to bring you an excerpt of Close Up, a romantic suspense story.

Vivian Brazier never thought life as an art photographer would include nightly wake-up calls to snap photos of grisly crime scenes or headshots for aspiring male actors. Although she is set on a career of transforming photography into a new art form, she knows her current work is what’s paying the bills.

After shooting crime scene photos of a famous actress, the latest victim of the murderer the press has dubbed the “Dagger Killer,” Vivian notices eerie similarities to the crime scenes of previous victims — details that only another photographer would have noticed — details that put Vivian at the top of the killer’s target list.

Nick Sundridge has always been able to “see” things that others don’t, coping with disturbing dreams and visions. His talent, or as he puts it — his curse — along with his dark past makes him a recluse, but a brilliant investigator. As the only one with the ability to help, Nick is sent to protect Vivian. Together, they discover the Dagger Killer has ties to the glitz and glamour of Hollywood royalty and high society. It is a cutthroat world of allure and deception that Vivian and Nick must traverse — all in order to uncover the killer who will stop at nothing to add them to their gallery of murders.

A man stood on the front step. He was not alone. He had a large dog with him. The dog was a handsome beast with a decidedly feral edge. Definitely not the cute and cuddly type.

The stranger waiting for Vivian to open the door was a lot harder to classify but the words cute and cuddly did not come to mind. She opened her senses a little but she couldn’t get a proper read on him while peering through the glass. All she could see were the superficial, easily cataloged elements — dark hair cut short in the current style and strong, rather fierce features that were far too interesting to be labeled handsome. A stern, grim expression implied a severe lack of a sense of humor. He looked like a warrior doomed to fight a never-ending battle.

She knew one thing — she couldn’t wait to get the new client in front of a camera. She wanted to know his secrets.

Vivian opened the door and smiled her best professional smile.

“Good afternoon,” she said. “If you’re here to request a portrait I’m afraid I’m fully booked today but I can give you an appointment first thing in the morning.”

The voice, she decided, went with the man — dark and resonant and compelling. It was a midnight-and-moonlight voice, full of shadows and unspoken promises. A voice that could lead a woman into — or out of — hell. She absolutely had to photograph the man.

But he had just said he was not a client. A tiny shiver of alarm flashed through her. She was suddenly very glad that Norman — big, muscular Norman — was still in the studio.

She dropped her professional smile.

“What do you want?” she said. “If you’re a traveling salesman—”

“I’m going to have to work on my image. People keep mistaking me for a salesman.”

“Is that right? Would that be because you are one?”

“No, this message was delivered by telephone, not telegram, late last night. I was in San Francisco at the time. I’ve been on the road ever since. Long drive.

“Who sent the message?”

“You don’t know the sender but I assure you he has your best interests at heart. I’ve got a character witness you can call.”

Before she could respond Norman emerged from the studio and ambled down the hall. He was wearing the very snug swimming trunks and his hair was still tousled. He looked like a man who had just rolled out of bed.

He noticed Nick, gave him a brief, polite nod, and then looked at Vivian.

“You can reach me at the gym when my photos are ready, Miss Brazier,” he said.

She tried to think of an excuse to make him linger for a few minutes, but before she could come up with something plausible he was halfway out the door.

“Got to get going,” he said. “I’ll be late to work at the lifeguard station.”

He went past Nick Sundridge and strode briskly down the front walk.

Vivian’s next-door neighbor Mrs. Spalding magically appeared and made a show of walking to her mailbox. The elderly Miss Graham across the street emerged from her house. She, too, headed for her mailbox.

The mail for that day had not yet been delivered. Neither Mrs. Spalding nor Miss Graham cared. Vivian’s new Muscle Beach clients had become a source of great interest in the small neighborhood.

Nick’s brows rose ever so slightly. “About my message, Miss Brazier.”

She moved deliberately out of the doorway and onto the front step. Nick and the dog made room for her.

“You can deliver your message here,” she said.

“I’m a private investigator, Miss Brazier. I’ve been hired to protect you. I supposed you should think of me as your bodyguard, although in fairness, I ought to warn you that I haven’t had a lot of experience—”

She froze. “What on earth are you talking about?”

“Someone wants you dead,” Nick said. “There is reason to believe that a killer has been commissioned to murder you at some point in the next few days.”

Amanda Quick is a pseudonym for Jayne Ann Krentz, the author, under various pen names, of more than fifty New York Times bestsellers. There are more than 35 million copies of her books in print. She is also the author of the Ladies of Lantern Street novels and the Arcane Society series.

Keira Soleore writes for the International Examiner and Cogitations & Meditations. She enjoys connecting with readers on Twitter (@keirasoleore) and through her website (www.keirasoleore.com). Her interests include medieval manuscripts, philosophy, poetry, picture books, choir, sunshine and beaches. Keira is a pseudonym.
All Posts
PrevPreviousTop Contemporary Romance Picks for April
NextTen Parks and Recreation Episodes To Enjoy Before The New SpecialNext