Exclusive: Cover Reveal and Excerpt of Ascending from Madness by Stacey Marie Brown 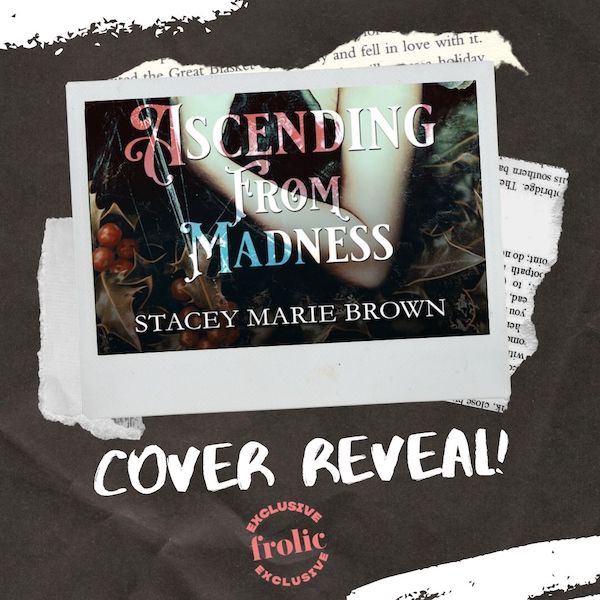 We are so excited to share with you the beautiful cover and exclusive excerpt of Ascending from Madness by Stacey Marie Brown, out November 4th!

About Ascending from Madness:

Your holiday season is about to get deliciously naughty!

The bad boys and girls of the Winterland are back for the conclusion of Alice and Scrooge’s story. This tale is mad, dark, twisted, sexy, and nothing like the legend you know.

Life for Alice Liddell should be normal. Work, family, and her general sucky life back at her parent’s house, working as a slutty-looking elf in Santa’s shop. But from the moment Alice wakes up from a terrible fevered dream, nothing feels ordinary.

With visions of strange creatures, an obsession with creating top hats until her hands bleed, and an inexplicable attraction to her married neighbor, Matt, she feels like she’s going crazy.

When her illusions of twin elves, singing penguins, and sexy reindeers start to turn into full blown hallucinations, her family feels they have no choice but to find her help.

Her therapist is Matt’s wife, Jessica Winters, someone Alice feels in her gut she shouldn’t trust. But he more Alice loses her touch on reality, the more her parents turn to Jessica.

In one night, Alice loses everything, landing her in an insane asylum where she learns Jessica is not at all who she seems. As Alice’s mind cracks further, her visions feel more like memories.

She’s in a fight for her life against the mad ruler of the institution. Except who will believe her? She’s the insane one, the one who gets visits by ghosts of holiday icons.

But one thing good about going mad? In some places being bonkers is exactly what you need…

To ascend from the madness. 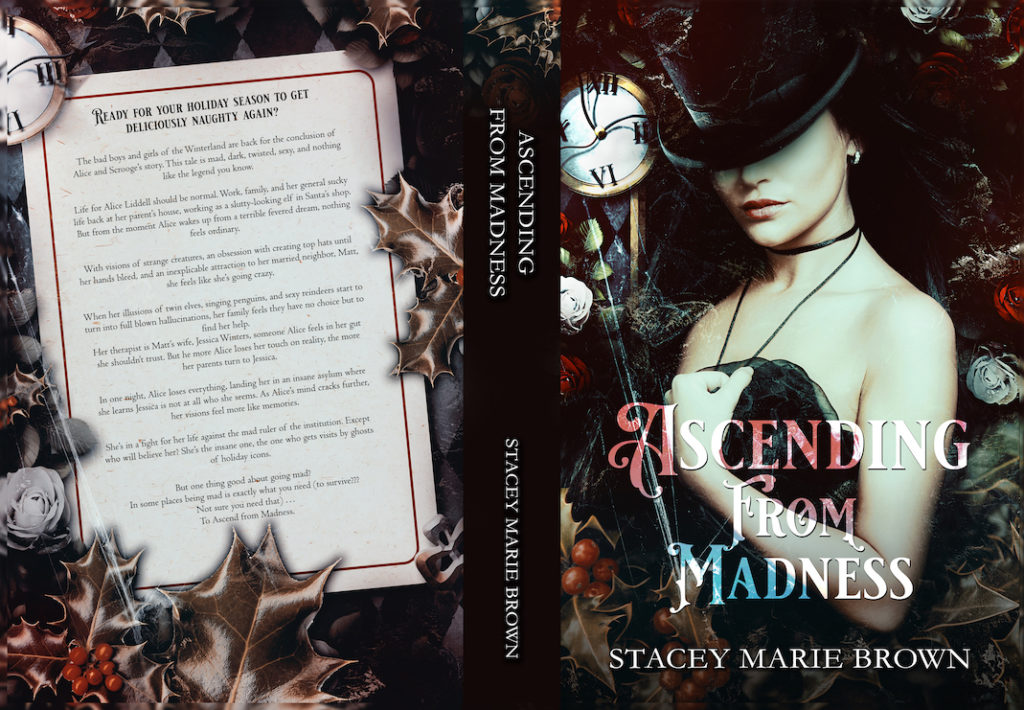 “You belong in the inappropriate and wrong club now, remember? We stick together.”

“Do we?” One eyebrow corked.

Shit… I stepped into that figgy pudding.

“Sure.” I swung my legs, peering back at the sky. “But to be a full-fledged member you must bring alcohol to the meeting.” I wiggled my empty glass. “Initiation.”

His smile never fully bloomed, but his eyes glinted with mischief. “That is a coincidence.” His hand went inside his jacket pocket, pulling out a flask. “I came prepared.”

“Damn, you really are Santa sent…” I sighed happily, licking my lips, not realizing what I said until his silence drew my gaze up to his eyes. He stared at me, once again his gaze tunneling into my soul like a gravedigger. “I mean…wow…I am not getting any better tonight. All sorts of awkward.”

“Actually, it was perfectly said for my first meeting.” He twisted off the cap, pouring the brown liquid into my cup. The rich, smoky aroma had my toes curling. “Hence our club name, Ms. Liddell.”

“What?” My head jerked up. It felt like a dart shot straight through my gut, heat snaking down to my thighs. “What did you call me?”

“I—” He stopped, his Adam’s apple bobbing, looking as if he had been shot by the same dart. Except faster than a blink, his expression turned to stone, clearing his throat again. “I called you Ms. Liddell. That’s your name, isn’t it?”

“Yes.” Why did him saying my name so formally feel so informal? As if he were stripping me bare. It felt far more intimate than if he had called me some sexy pet name.

“Well, what should we cheer to for our first meeting?” He lifted his flask up in the air.

“Your first meeting.” I brought up my drink to his. “I’ve been a dedicated member since birth.”

“Sounds like you would have been all sorts of fun to grow up with.” His mischievous gaze met mine. His eyes were bottomless and crammed with naughty trouble.

His mouth lifted cheekily. “A salutation to a merry holiday?”

“Bah, humbug.” My lips twisted up, matching his impish expression.

A soft chuckle came from him, his gaze growing even more intense.

“Bah, humbug.” He tipped his head, tapping his flask against my glass, both of us about to take a drink.

“Matthew!” A woman’s voice barked, jolting us to the figure standing at the unlit back kitchen door.

This woman froze me with just a look, like she was the Snow Miser. Her icy blue eyes latched on to us, her body stiff and regal as she stepped out farther onto the deck. A frown wobbled on her face before she corrected it, a small laugh puffing out.

“I have been looking for you everywhere, dar-ling.” She strolled closer, everything about her screamed well-educated, well-bred, money, pampered, and extremely controlling. She seemed cold and snobbish, not at all a good match for the man next to me.

She was a sexy woman, and it didn’t matter if she was older or not. I hated the uptight bitch for reasons I couldn’t comprehend. I didn’t even know the woman except she had the man I felt unbearably drawn to. Craved.

That needed to end now.

“You know I hate being away from you,” she purred, reaching out her hand for him to take it. He tucked away his flask and promptly received her hand. Like a trained dog.

“I’m sorry, love.” He kissed her knuckles, and I watched her shoulders ease down, a smile growing on her perfectly painted lips.

“It’s past Timothy’s bedtime.” Her fingers coiled around his. She pretended I wasn’t there, but I could feel the force of her possessiveness shoving me back away from him.

“It’s only eight o’clock. Surely, my love, we can let him stay up tonight. He’s was having so much fun dancing and eating all the gingerbread cookies.”

“Exactly,” she snapped loudly. “I mean…” A smile appeared back on her face. “He will have all that sugar in his system. You know how I feel about him eating sugar. Not healthy. We don’t want him to get diabetes now, do we?”

Oh. She was one of those moms.

“I don’t think he’ll get diabetes from one night of eating a few cookies.” I could hear the annoyance in Matt’s tone.

“I have a terrible headache from the music.” She pinched her nose. “And you have just gotten over being ill. Sitting outside in this bitter weather…I thought you smarter than that, my love.”

He took a deep breath, standing up, rolling his shoulders back. Tension in his muscles moved under his fitted jacket like snakes.

“You’re right. We should get home. A good night’s sleep is exactly what I need.” He dropped her hand but put his on her back to steer her toward the sliding glass door.

“Have a good night, Ms. Liddell.” He nodded at me. “It was a pleasure meeting you.”

“Yes, Alice. It was lovely.” Funny she said that, but it was not what her expression was saying. “Come, my darling.” Jessica stepped in the house.

“Night, Mr. Hatter.” I tried to say it as properly as I could, like everything out here had been formal and above censure.

He turned when he got inside, his hand on the door handle. His gaze latched on mine, his lips rolling together. He looked like he wanted to say something, but at the sound of his son’s voice calling him, he shut the door and turned away from me.

I swallowed back the lump in my throat, swiveling back to face the yard. What the fuck was wrong with me? Guzzling down the rest of whiskey, I tried to understand why his leaving made me feel so alone. I had just met him a few hours ago.

Leave it to you, Alice, to crush on a married man.

Gutted. Lost. As if whatever I had been searching for, I finally found, then lost it again.

Stacey Marie Brown is a lover of hot fictional bad boys and sarcastic heroines who kick butt. She also enjoys books, travel, TV shows, hiking, writing, design, and archery. Stacey swears she is part gypsy, being lucky enough to live and travel all over the world.

She grew up in Northern California, where she ran around on her family’s farm, raising animals, riding horses, playing flashlight tag, and turning hay bales into cool forts. She volunteers helping animals and is Eco-friendly. She feels all animals, people, and environment should be treated kindly.

Where Romance and Pop Culture Live Happily Ever After.
All Posts
PrevPreviousLove YA: Top 3 Y.A. Reads for the Week of October 8th!
NextExclusive: Excerpt of Viral by T. GephartNext