Exclusive: Cover Reveal and Excerpt of ‘Every Other Weekend’ by Abigail Johnson 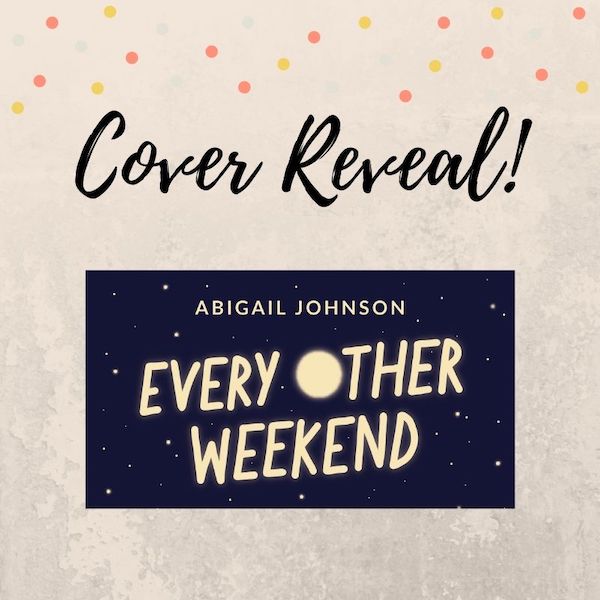 Abigail Johnson, author of Every Other Weekend, is thrilled to share this exclusive first look at her cover with Frolic followers! She says:

I’ve written four novels and have loved the cover process every time. It’s thrilling to see my story and characters come to life! I knew we were going in a new art direction for the cover of Every Other Weekend, because unlike my previous young adult stories, this novel is told from two points of view. It was important to me that both characters were represented on the cover, but I had no idea that my brilliant cover art director, Gigi Lau, was going with an illustrated approach until I saw the concept. Even in that early stage, I knew it was going to be my favorite cover yet! She found an artist, Marissa Korda, creator of The Loneliness Project, who not only captured my main characters Adam and Jolene perfectly, but included the adjoining balconies in the rundown Philadelphia apartment building where they meet and spend every other weekend together. And the pigeons! Those pigeons are in the book! I could not be more thrilled with how the cover turned out, and I can’t wait to introduce readers to this heartbreaking and heart-healing story of first love. 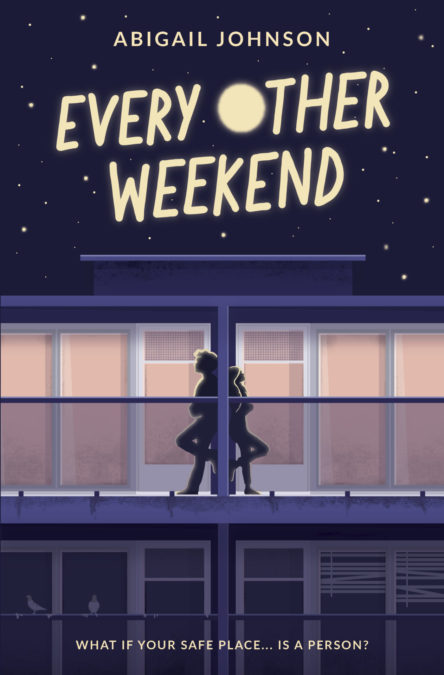 About Every Other Weekend:

Adam Moynihan’s life used to be easy. Straight As came as effortlessly as friends and his home life was so perfect it could be a TV show straight out of the 50s. That all changed when his oldest brother died. Now his fun-loving mom cries constantly, he and his remaining brother can’t talk without fighting, and the father he always admired proved himself a coward by moving out when they needed him most.

Jolene Timber’s life is nothing like the movies she loves–not the happy ones anyway–and as an aspiring director, she should know, because she’s been reimagining her life as a film since she was a kid. But with her divorced parents at each others throats and using her as a pawn, no amount of mental re-editing will give her the love she’s starved for.

Forced to spend every other weekend at the same apartment building with their fathers, the boy who thinks forgiveness makes him weak and the girl who thinks opening her heart makes her a fool begin an unlikely friendship. The weekends he dreaded and she endured soon become the best part of their lives as they share grief and dreams and plans for a future that starts to feel filled with possibility. But when one’s life begins to mend while the other spirals out of control, these sixteen-year-olds realize that falling in love while surrounded by its demise means nothing is ever certain.

Jolene held up a finger to her lips when I opened the door to my room and found her sitting cross-legged in the middle of my bed.

I halted with my hand on the door, staring at her and trying to decide if I was hallucinating. Then the sound of Dad and Jeremy talking spurred me into motion and into the room. I pulled the door shut behind me and locked it. “What are you doing here? How did you even get in?”

She lowered her voice to match mine. “I adopted your technique for scaling balconies. Though let me just say it’s much more difficult without your height advantage. Also, wet metal is super slippery, did you know that?”

I half shook my head. “Wait, start with the why.”

I widened my eyes in confirmation before darting them back to the door I was basically barricading with my body. If Dad or my brother heard her… But then, Jeremy had already heard her, we both had, down in the parking lot. When she’d said all that stuff about her mom. My gaze slid more slowly over her. I’d noticed her messy braid before, but up close I could see that strands and tangles stuck out everywhere, and one knee on her jeans was torn—and not in a way that looked deliberate. Plus, there was a scrape on her cheek. “Is that all from your mom?” I asked, unable to keep the concern from my voice.

“What?” Then she looked down at herself and half laughed. “Oh, right. No. My hair is mostly from the wind trying to fling me off the side of the building while I was climbing the railing, the scrape is from getting up close and personal with the apartment wall, and the torn jeans are from when I tumbled onto your balcony. It was all very graceful.”

I wasn’t sure I completely believed her but before I could ask anything else, a fist pounded on the door.

“Adam. Get out here. We’re going to dinner.”

I looked at the door, then back at Jolene. More pounding.

She raised her eyebrows at me, as if she was merely curi­ous as to how I’d handle the situation of hiding a girl in my room while my dad and brother stood right outside the door. Considering that she’d risked much more than a broken leg climbing onto my balcony, the least I could do was blow off my brother.

“Can’t. I feel sick.” I stood up, took a few steps toward the door and half turned my back to her.

“You are such a little—” The doorknob rattled as Jeremy tried to force it open. Dad asked what the problem was and the rattling stopped. “It’s fine. Adam’s sick though. We had to pull over on the way here so he could puke.”

The doorknob was tried again, easier this time. “Adam, you all right? Do you need anything?”

Jeremy answered for me. “He’s fine. He’s gonna stay here and sleep it off.”

There was a conversation that I couldn’t quite follow, but it ended with Jeremy convincing Dad that they should go and leave me to rest in quiet.

“We’ll bring you something back in case you feel better later,” Dad said. “You have my cell.” The front door opened and shut a minute later.

“You’re not really sick, are you?” she asked, eyeing me.

“So can I hang out for a while? Not all night or anything, just until Shelly falls asleep?”

“Yeah,” I said, sitting on the foot of the bed and feeling pretty good about the fact that I’d gotten rid of Jeremy and Dad so easily. “Stay as long as you want.”

Abigail Johnson was born in Pennsylvania. When she was twelve, her family traded in snowstorms for year-round summers and moved to Arizona. Abigail chronicled the entire cross-country road trip in a purple spiral-bound notebook that she still has, and has been writing ever since. She became a tetraplegic after breaking her neck in a car accident when she was seventeen, but hasn’t let that stop her from bodysurfing in Mexico, writing and directing a high-school production of Cinderella and becoming a published author. Visit Abigail online at abigailjohnsonbooks.com and follow her on Twitter, @abigailswriting.

Where Romance and Pop Culture Live Happily Ever After.
All Posts
PrevPreviousDaily Frolic: Listen to Beyonce as Nala in ‘The Lion King’
NextThe Devil is Back, and All the Ships Are Sailing: Lucifer Season 4 RecapNext