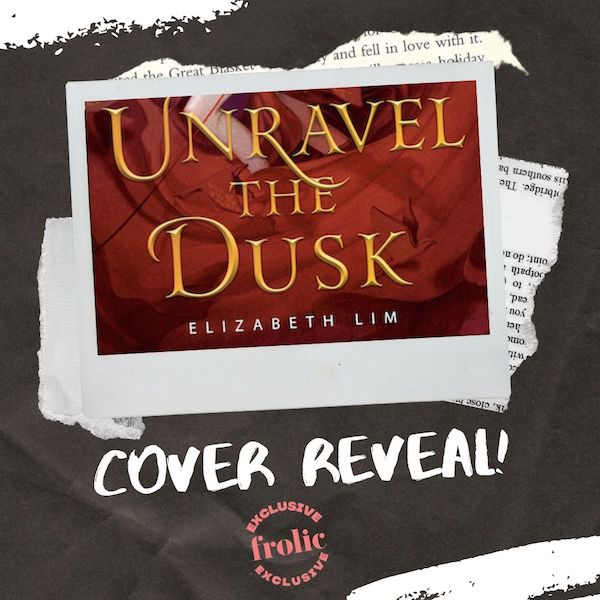 We are so excited to share with you the amazing cover and exclusive excerpt of Unravel the Dusk from Elizabeth Lim, out July 7, 2020!

About Unravel the Dusk:

Maia Tamarin’s journey to sew the dresses of the sun, the moon and the stars has taken a grievous toll. She returns to a kingdom on the brink of war, Edan, the boy she loves, is gone–perhaps forever–and no sooner does she set foot in the Autumn Palace than she is forced to don the dress of the sun and assume the place of the emperor’s bride-to-be to keep the peace. When the emperor’s rivals learn of her deception, all hell breaks loose, but the war raging around Maia is nothing compared to the battle within. Ever since she was touched by the demon, Bandur. she has been changing . . . glancing in the mirror to see her own eyes glowing red; losing control of her magic, her body, her mind. It’s only a matter of time before Maia loses herself completely, and in the meantime she will stop at nothing to find Edan, protect her family, and bring lasting peace to her country. 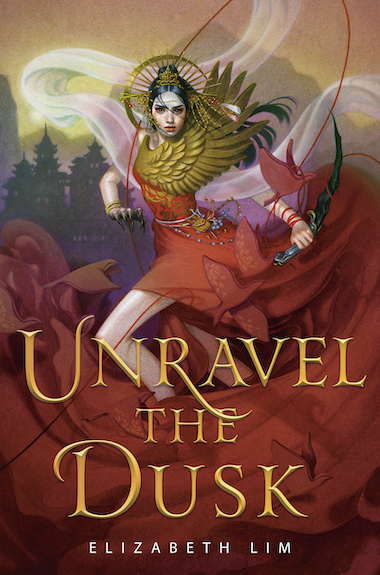 “My guards found this in your chambers.”

The emperor held up a single black feather. A hawk’s.

My pulse roared in my ears, but curiously, I held my calm. It was unlike me: yesterday I would have stared at the ground, stammering a barely coherent response—begging for the emperor not to hurt Edan. Today, I simply clasped my hands and bowed my head. “The Lord Enchanter is known for taking the form of a hawk to facilitate his service to Your Majesty. If he visited my chambers, it was no doubt to ensure that I was working on my tasks for Lady Sarnai.”

“You’ve developed a courtier’s tongue while you were away, Tamarin,” said Emperor Khanujin. The praise rang hollow in my ears, as it was meant to. “You traveled with him for months. Why did he leave?”

That, I knew the answer to. Edan had left because I’d begged him to. Because I’d lied to him and told him I’d be fine without him. Because I had broken his oath to the emperor, and if he didn’t leave . . . gods knew what Khanujin would do to him.

But I couldn’t tell the emperor that.

I could lie, but no lie would keep Edan safe from Khanujin’s wrath forever. Unless . . .

I licked my lips, tasting the sweetness of a new possibility. I glanced at Emperor Khanujin’s throat, barely protected by the richly embroidered collar of his jacket.

Think how easy it would be, a dark voice bubbled within me. My voice.

If you want to protect Edan, this is what you must do. You have the strength. Khanujin is weak and alone.

Heat prickled my eyes, and my fingers twitched with temptation.

Yes. Do it. The voice resonated deeply, overthrowing my senses and my reason. Kill him.

No! I dug my nails into my palms. Go away.

That was what I was afraid of. I gritted my teeth. LEAVE ME.

When the laughter floated away and finally faded, I uncurled my fingers and rubbed the bloody half-moons imprinted on my palms.

“Tamarin!” the emperor growled. “If you lie to me, I’ll have your father and brother brought here to be hanged.”

A flare of anger shot up to my chest, squeezing it so tight I could hardly breathe. I wanted to tell him I would kill him before that happened, that I’d give in to the darkness in me and shatter his bones one by one before I let him touch my family.

But I did not. The anger was gone as quickly as it came. I touched my head to the ground in a deep bow.

“Forgive me, Your Majesty, but I do not know. I pray the Lord Enchanter and Lady Sarnai will both be found.” I paused, waiting for the sharp sting of regret rising in my chest to dull. I wished I had never searched Lady Sarnai’s room, had never helped the emperor gather clues to find her.

I bowed again, and finally, Khanujin flicked his hand in dismissal.

“Thank you, Your Majesty.” My voice was ice once more, gravid with lies. “May you live ten thousand years.”

Elizabeth Lim grew up in the San Francisco Bay Area, where she was raised on a hearty diet of fairy tales, myths, and songs. Before becoming an author, Elizabeth was a professional film and video game composer, and she still tends to come up with her best book ideas when writing near a piano. An alumna of Harvard College and the Juilliard School, she now lives in New York City with her husband and her daughter. Spin the Dawn (book 1 in the Blood of Stars series) was her first original novel, and Unravel the Dusk is her second. Visit her at elizabethlim.com Follow her on Twitter @LizLim Follow her on Instagram @elimpix

Where Romance and Pop Culture Live Happily Ever After.
All Posts
PrevPreviousLove YA: Top 3 Y.A. Reads for the Week of October 28th!
NextDaily Frolic: Hallmark Channel Monopoly Exists and It’s So Freaking CuteNext