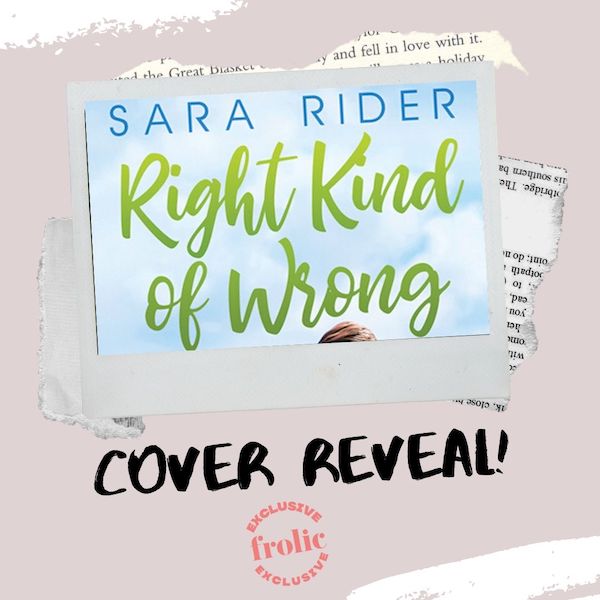 Hi, beautiful readers. Are you ready for the surprises we have for you today? When Sara Rider approached me to reveal her newest book’s cover, I was so happy! All her covers are so beautiful, plus the stories inside are *chef kisses*. Right Kind of Wrong is releasing February 11th, 2020. The cover designer is Paper and Sage Design. Isn’t it so beautiful?!!!!! Look at the happiness these two are emanating. 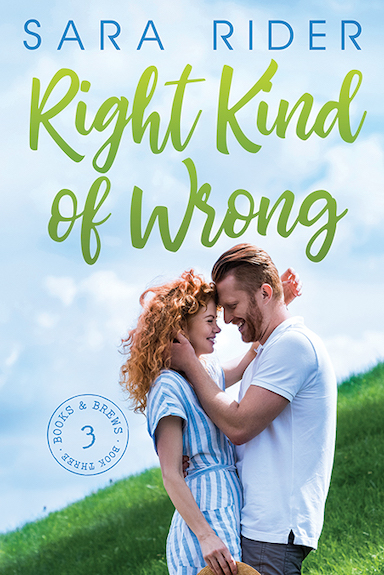 About Right Kind of Wrong:

When Julia Hardin is hired to plan the local library’s annual fundraiser, it’s exactly the chance she needs to take her event planning business to the next level. With a shoestring budget and ridiculously tight timeline, it won’t be easy to pull off, but Julia has never shied away from a challenge before. Then again, she’s never met a challenge quite like Fergus MacNair, the town’s hot, grumpy librarian who’s determined to thwart her plans at every turn.

Fergus is willing to do almost anything to bring in more funds to support vital library programming. But nothing about working with Julia, a woman who gets under his skin like no other, is easy. Not her bossy attitude, not her over-the-top decorations, and most certainly not the way she sparks an uncontrollable desire inside of him. But when she accidentally returns a library book with a sexy doodle of him for a bookmark, he realizes just how unprepared he is for this partnership.

When Fergus discovers her doodle, Julia is certain this is one disaster she’ll never recover from. But when Fergus responds with a naughty drawing of his own, these complete opposites might just find a common language after all.

Julia dropped her back against the heavy door with her eyes closed and held the book to her chest. Adrenaline thundered in her veins. What had she just gotten herself into?

This wasn’t the first time a romance novel had her breathing heavy, but it was the first time it happened in a semi-public place. With a deep, steadying breath, she forced her eyelids open.

A knock shook the door behind her, surprising her so much, she nearly pitched forward.

Shit. “Yes?” She’d tried to keep her voice normal, but the word came out more like a squeal.

A silent pause followed, long enough that the tiniest filament of hope he was going to ignore the fact she was hiding out in the bathroom sparked in her chest. “Is everything okay?”

No. Nothing about this situation was okay. She was locked in a bathroom on a Friday night with only one inch of metal separating her most embarrassing secret from the man who inspired it. Her hair was a mess, her lipstick smeared, and there was floor lint on every inch of her clothing. “Yep, it’s fine.”

“Normally, people who are fine don’t climb through library windows and lock themselves in the bathroom.”

“Shows what you know about normal!”

“Julia.” He drew out the syllables of her name like warm taffy pulled in his hands. His big, strong, capable hands. It sent a flutter into her belly.

“Yes?” This, she realized, was the defining moment of her life. She could walk on the moon or win a Nobel Prize, and the last thought she would have on her deathbed was of how she ended up here.

“What are you doing inside the bathroom?”

“Girl problems!” She drummed her fingers frantically against the well-worn cover of the paperback in her hands, praying he would just decide to leave her alone.

Then, as if by a miracle, she heard his heavy footsteps leading him away from the bathroom door. She exhaled in sweet relief and started flipping through the pages of the book, searching for the drawing. It wasn’t there. She held the book upside down and shook it. Nothing came out. Panic swirled in her chest. Where is it?

Another bang at the door made her jump.

“Julia?” This time his voice was different. Quieter. Like he was nervous, which was odd because Fergus MacNair was not the one with a reason to be nervous in this particular moment. “I’ve got menstrual pads if you need them.”

She dropped the book, eyes going wide. “What? No! That’s not—”

“It’s nothing to be embarrassed about. It happens all the time. The dispenser in the bathroom broke a few weeks ago, so we’ve been keeping the supplies in the back office.”

“If you prefer tampons, I’ve got those, too.”

“No!” She picked up the book and shook it one more time.

“I’ve got regular and super-heavy flow—”

Realizing this couldn’t get any worse, she opened the door. He was holding a handful of tampons like a bouquet of flowers. She swiped them from his hand and shoved the book into his chest. “Here you go. I just needed to finish the last chapter.”

She took advantage of his confusion to beeline for the exit, cursing her love of tall, spiky heels, and she ran. She pushed the long heavy bar to open the door and slammed her shoulder into the metal. “Oof.”

“Right.” Her face, already a painful red, burned with embarrassment. “Um, I don’t suppose you could open it for me?”

He stepped so close, she was trapped against the door, shoulders aching and heart racing in her chest. She shoved the tampons into her purse, brushed her hair out of her face, and straightened her back as though she still had a little bit of dignity hidden away somewhere to draw on in this moment. “You forgot to say the magic word.”

He stepped even closer—so close, one deep breath would press her chest against his. In spite of everything, a shiver rolled down her spine. He was six feet five inches of unbearably handsome man, with a broad, muscular chest and angular jaw. His hair a lighter shade of red than her own, and his eyes were powerful and penetrating behind the metal frames, like he was reading her thoughts. He tilted his head down, lips getting closer and closer to her ear. “The magic word is please.”

His breath was warm against her neck. She shuddered, hoping he didn’t notice but a small chuckle escaped his lips. She should have known nothing would go her way today, so she decided to go all in. She closed her eyes and inhaled deeply, needing to know what he smelled like…

Her eyes flashed open and she inhaled once more. This time it was more like a sniff. Yep. This man, with his biceps like tree trunks and a stare that would make anyone cower, did not smell like the male characters in her beloved romance novels. There was no essence of cedar or wood-smoke or motor oil or danger wafting from his skin. Fergus MacNair smelled like pumpkin spice.

It was delicious. She wanted to sniff him until her nose was full of his scent. Why did that have to make him so much more attractive? And does his skin taste just as good? He took a step back like he just realized she was a feral creature. She wasn’t entirely sure she wasn’t in this moment.

“I’m sorry. Would you please let me out?”

“You sure you wouldn’t rather go back out the window?” He plucked a chunk of gray fluff off the sleeve of her black trench coat.

She narrowed her eyes, despite the uncomfortable mix of shame and lust swirling in her belly. “Please, Mr. MacNair, would you pretty please open the door for me, please?” Somehow, her words came out breathy and sultry instead of sarcastic.

There was a flash of something in his eyes. Surprise? Lust? Horror?

“Of course.” He pulled the dangling key set from his back pocket and unlocked the door. She didn’t wait. As soon as she had a taste of freedom, she bolted for her car, impervious to the chilly January wind and fat, heavy snowflakes falling around her. It wasn’t until she was safely inside her warm apartment that she realized she’d never found the drawing.

Sara Rider writes contemporary romances full of heart and heat about strong women and the men who can’t resist them.

Growing up, Sara Rider dreamed of becoming a professional soccer player. When that dream was squashed by her extreme dislike of running, she decided to do the next best thing: write about professional soccer players. By day, Sara spends her time working in the field of research ethics and daydreams about plotlines and character arcs. She spends far too much time at public libraries and never leaves the house without a paperback or an e-reader stuffed into her purse. For the Win is her first novel. Find her here: https://sararider.com/

Hi, I'm Sil! 21. Mexico. she/her pronouns. I am the owner of the book blog, The Book Voyagers, where I blog and review books. Mainly, I focus on recommending and reviewing diverse books written by marginalized authors. You might also know me for doing book aesthetics and just shouting in capital letters about new books releasing. I'm a big fan of Adult Romance, but I also love Young Adult especially contemporary fiction and fantasy.
All Posts
PrevPreviousHistorically Yours: Top Historical Romance Picks for November 18 to December 1
NextContemporarily Ever After: Top Picks for the Week of November 24thNext