Exclusive: Cover Reveal and Excerpt of None Shall Sleep by Ellie Marney 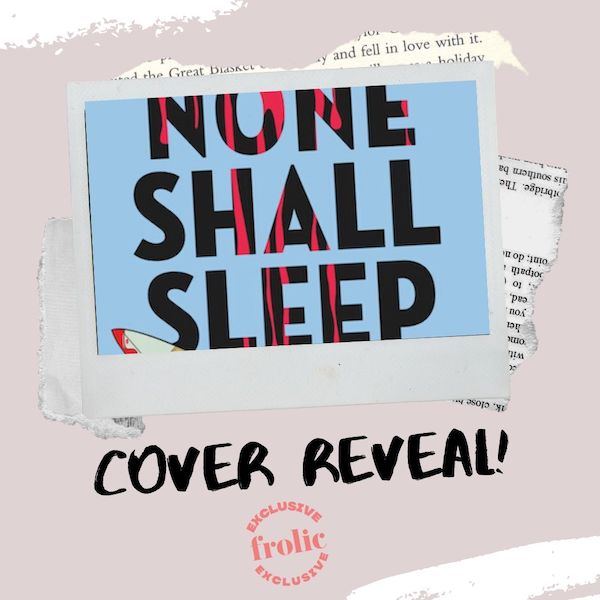 We are so excited to share with you the amazing cover of None Shall Sleep by Ellie Marney, out September 1, 2020!

Note From Ellie: None Shall Sleep draws inspiration from a number of sources – I’m a longtime fan of the work of Thomas Harris, Stephen King, and real-life FBI profiler John Douglas, who wrote the original Mindhunter, which I first read in my 20s. Douglas (as everyone now knows from the TV series Mindhunter) was one of the key agents Involved in the creation of FBI Behavioral Science in the 1970s, when that unit was in its infancy, and his story is truly amazing. For additional ideas around serial murder and FBI processes I also contacted the FBI, and researched their own historical newsletters and webpages.”

“I wanted to write something that wasn’t just about the serial killers – who seem to get all the focus when we talk about cases like these. I wanted to focus on the victims. In None Shall Sleep, we have a girl who’s been a victim now investigating a new case, and she feels very much like she’s doing it on behalf of the current victims. Driven by rage and survivor’s guilt, she and her partner want justice for the teen victims. Unfortunately, they have to depend on a deeply unreliable source – teenage murderer Simon Gutmunsson – to get the information they need to pursue that justice. 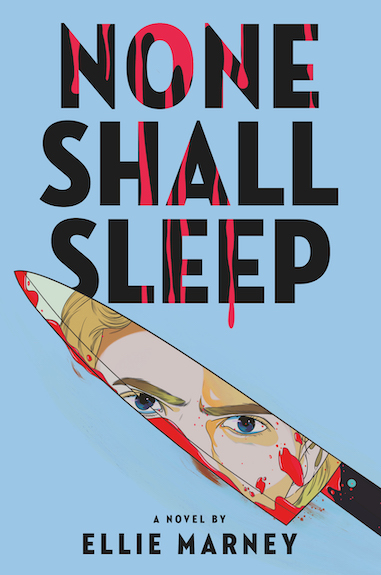 About None Shall Sleep by Ellie Marney:

In 1982, two teenagers, Emma Lewis and Travis Bell, are recruited to the FBI’s Behavioral Science Unit to interview convicted juvenile killers and provide insight and advice on cold cases. Both have experience with serial murder: Emma is the only survivor of murderer Daniel Huxton, and Travis’s U.S. Marshal father died while trying to capture a teenaged serial killer.

From the start, Emma and Travis develop a quick friendship, gaining insights and knowledge from convicted juvenile killers that even the FBI couldn’t crack. But when the team is called in to give advice on an active case-a serial killer who exclusively hunts teenagers-things start to unravel. Working against the clock, they must turn to one of the most notorious murderers behind bars for help: teenage serial killer Simon Gutmunsson.

Despite Travis’s objections, Emma becomes the conduit between Simon and the FBI team. But while Simon seems to be giving them information they need to save lives, he’s an expert manipulator playing a very long game….

Emma has a towel draped around her neck and a canteen on the table to her right. The dark stubble on her scalp is like a fine down. It suits her, actually. She looks compact, contained. Fierce. Cooper makes sure to sit across from her at the table, give her space.

‘Thank you for speaking with me. It’s nice to meet you.’

She doesn’t respond to that. ‘Did you fly from Virginia?’

‘Yes, it is. You study psychology here at OSU, is that right? Hoping to specialise in paediatric psychology? Your professor said you were inspired by a positive experience with an excellent therapist –‘

‘Yes.’ She tilts her head, lets the sun fall on her face. ‘Mr Cooper, why have you come to see me?’

Time to plunge in. ‘Miss Lewis, have you heard of the Behavioural Science section of the FBI?’

‘Yes.’ Her gaze is direct. ‘They do psychological assessments – profiles. They did a profile on Huxton.’

‘They help in cases like that, yes. Violent crimes. Behavioural Science is a young area, we’ve been working active cases for less than a decade. But we seem to be one of the sections producing results.’

She’s quick. He knew she was quick. ‘We look at the evidence and the information we have, and try to figure out a pattern of behaviour. Once we have a pattern, it allows us to narrow down suspects, even predict what a perpetrator might do next. It helps us find them faster.’

He understands the change in her expression straight away.

‘It’s not one-hundred-percent accurate, Miss Lewis. Nothing is. We just do our best. But our success rate is generally high.’ Not with Huxton. Huxton was a mess. Cooper buckles that shit down. It’s not helpful here. ‘The reason we’re successful is because we do our homework. We go into jails and institutions and interview the perpetrators we incarcerate. It’s a lot like a research project. The information we gather is compiled in a database and used to inform our profiling work.’

There are times Cooper wishes he still smoked. He could light a cigarette, look more normal, relaxed. If you seem to relax, it relaxes the subject.

‘Miss Lewis, we’ve interviewed about thirty-five incarcerated perpetrators from all over the country. But there’s a cohort of people we still don’t have access to. And it’s not because we can’t see them. They just…won’t speak to us.’ He’s been looking at her, but now he really looks. ‘I’m talking about juvenile offenders.’

The OSU Buckeyes cheer squad is rehearsing on the other side of the oval. Cooper hears the rallying calls as a far-off stir of echoes.

‘Juvenile serial killers.’ Emma rolls the syllables in her mouth. Then she reaches for the canteen and takes a swig, like she’s washing away the taste. ‘There can’t be many teenage serial killers, though.’

‘There’s enough.’ He doesn’t want to come in hard, but he’s getting the feeling she responds better to that. ‘Everyone starts somewhere.’

‘Like it’s a career.’ She looks toward the oval.

She stares at him. She looks very young. He resists the instinct to be gentle. They need this. Her, or someone like her. There aren’t many people like her.

Ellie Marney is a teacher and an author of fiction for Young Adults. Her YA crime trilogy, the Every series, and her YA standalone, White Night, have been critically and commercially successful in Australia and overseas – her debut, Every Breath, was shortlisted for the Gold Inky Award, the Ned Kelly Award and the Sisters in Crime Davitt Award (YA), and in 2015 was named by the Australian Library Information Association as one of the top ten most-borrowed YA books in Australian libraries. Ellie is a regular speaker at festivals and events, teaches writing and publishing through Writers Victoria, and advocates for Australian women’s writing as a Stella Ambassador in schools. She lives in regional north-central Victoria, with her partner (also a teacher) and their four sons.

Where Romance and Pop Culture Live Happily Ever After.
All Posts
PrevPreviousDaily Frolic: If You Studied English, You Need to Follow this Instagram Account
NextA Madwomen’s Chess: The Hidden History of the Queen’s Power by Skye WarrenNext