Exclusive Excerpt: A Lie for a Life by Helena Hunting 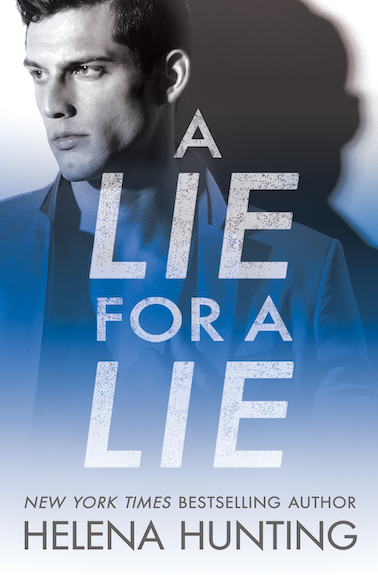 A Lie for a Lie is the exciting start to Helena Hunting’s All in book series. Read on for a fabulous exclusive excerpt of the story.

About A Lie for a Lie:

Sometimes I need an escape from the demands, the puck bunnies, and the notoriety that come with being an NHL team captain. I just want to be a normal guy for a few weeks. So when I leave Chicago for some peace and quiet, the last thing I expect is for a gorgeous woman to literally fall into my lap on a flight to Alaska. Even better, she has absolutely no idea who I am.

Lainey is the perfect escape from my life. My plan for seclusion becomes a month-long sex fest punctuated with domestic bliss. But it ends just as abruptly as it began. When I’m called away on a family emergency, I realize too late that I have no way to contact Lainey.

A year later, a chance encounter throws Lainey and me together again. But I still have a lie hanging over my head, and Lainey’s keeping secrets of her own. With more than lust at stake, the truth may be our game changer.

“So, tell me what’s going on with the tour guide.”

I drain half the cup in one gulp. “I met her on Kodiak Island last summer.”

He’s in the middle of a sip and cough chokes. “That’s the girl from Alaska? I thought you said she was from Washington. What’s she doing here? Don’t tell me you have another stalker.” The year before I took over for Alex as captain of the team, we got pretty close, mostly because he took me under his wing and mentored me. At the time I didn’t realize he was grooming me to take his place. Since then we’ve stayed pretty tight.

“Yes, she’s the girl from Alaska. Yes, she’s from Washington. She got offered a job here and took it, and I’m pretty sure she’s not stalking me.”

“How can you be sure? I mean, you’re not that hard to find.”

“She wasn’t big on technology.” I scrub a hand over my face. “And I never told her I played professional hockey.”

“Too busy getting busy to be bothered with the chitchat?” Alex asks.

“No. Well, I mean yeah, there was lots of…sex, but that wasn’t what it was all about.”

“So how is it that you being a professional hockey player never came up?”

“I might’ve lied about where I lived and what I did for a living.” I mumble it quickly and drain my cup. I could use another drink. Or just downing whatever is left in his flask.

“She didn’t recognize me, and she wasn’t into hockey. You know how it is with bunnies. They’re just in for the ride, right?”

“But she’s not a bunny, so I’m not getting why it would matter then.” He looks confused more than anything.

I sigh, aware explaining my rationale isn’t going to be easy. “I wanted to be normal for a few weeks.”

Violet squeezes her way between us, snatches Alex’s cup, sniffs it, and raises an eyebrow. “Seriously, Alex? You better be careful how sauced you get. Your parents said they’d have a sleepover in the pool house with Robbie, and you know how I get in my second trimester.”

Alex grins and bends to whisper something in her ear. She hands him back the cup, turning her attention to me. “I assume you’re coming out for drinks after this.” She motions to the table of children shoveling cake into their mouths.

“Rook’s trying to hook up with the tour guide,” Alex supplies.

“My respect for you just went up a few notches. I had no idea you were into the nerdy chicks.”

“She’s not nerdy,” I say defensively.

Violet gives me a look. “Uh, she knows an insane amount about aquatic animals and can rhyme off statistics like a Beat poet. Also, as a nerd, I can easily identify other nerds — and she is definitely one. It’s too bad they can’t put her in something other than beige, because she’s also super gorgeous. You should invite her along. Introducing her to your friends will go a long way toward getting you into her pants — if that’s your plan, anyway.”

“Why not? When was the last time you went out with someone, Rook?” Violet looks like she’s about to start in on me about dating. It wouldn’t be the first time in the past year.

“Nerdy tour guide is the Alaska girl from last summer.” Alex passes me the flask behind her back.

“Wait, what? She’s Alaska girl? That’s so awesome!” Violet jumps up and down once with excitement. It quickly turns into a grimace, and she grabs on to her boobs. I look away because Violet, for being as small as she is, has a huge rack, and she’s currently wearing a shirt that shows off a significant amount of cleavage, and all the jumping and self-groping only draws more attention to it. Also, I don’t want Alex to catch me looking.

“Yeah, I don’t know if awesome is how I would describe this situation.”

“Why not? It’s like fate.” She grabs Alex by the shirt and tips her head back so she can look up at him. “Just like when you accidentally let your nerd hang out when you mentioned how I was reading Fielding at a hockey game. My beaver took the reins that night.”

He gazes down at her, wearing a half smile, all the love in the world oozing out of them like freaking rainbows.

Actually, I think he might be looking down her top. “Best damn night of my life.”

I’m about to ask them if they want some privacy, but Violet returns her attention to me. “You have to go talk to her.”

“Of course it’s that simple. Why wouldn’t it be?”

“Apparently he lied about his job,” Alex tells her.

Violet frowns. “Why would you do that?”

I shrug. “Because I’m an idiot. She didn’t know who I was, and it was kind of nice being a regular guy for a few weeks, you know what I mean?”

“So what kind of job did you tell her you have?”

“I told her I was an alpaca farmer, which would’ve been true if I didn’t play professional hockey.”

“My parents were alpaca farmers.”

Her nose wrinkles. “Really. How did I not know that?”

“It doesn’t come up much in conversation, I guess?”

I scrub a hand over my mouth and mutter, “My name.”

“I’m sorry, did you say your name? Why lie about that?”

“Well, like I said, she didn’t recognize me, and it wasn’t like I made up a fake one. I just gave her my nickname instead.”

She blinks a few times. “You told her your name was Rookie?”

“No, I told her it was RJ, which is what my dad always called me and what my brother and sister still call me now. So it wasn’t totally a lie. I mean, my name is pretty uncommon. Shit. I handled this all wrong, and now she’s going to look me up and see all the bunny crap.”

“So was it just that you didn’t want her to know you used to let the puck bunnies use you?”

“No. That wasn’t it. I mean, now it’s obviously going to be an issue, but I just wanted to be normal for a few weeks. And now she knows I lied to her about my job and my name, so I’m pretty sure she doesn’t want anything to do with me. And even if she’s willing to talk to me, once she realizes what else I’ve left out she’ll probably never want to speak to me again.”

This is on me. I kept putting off telling her the truth, maybe in part because I hoped that if she fell for me the way I fell for her, by the time I finally told her what I really did for a living, it wouldn’t matter.

“Well, that’s a complication, since you’re still obviously hung up on her.”

“Yeah. I have her number, though, so that’s good, right?”

“If she’ll answer your calls, sure,” Alex says.

“And what happens when she finds out about my personal relationship history?”

“You mean that you used to be a manwhore?” Violet asks.

Violet puts a hand on my shoulder, her expression serious. “If it’s meant to be, she’ll get over it — as long as you didn’t give her some kind of lasting STD as a gift.”

New York Times and USA Today bestselling author Helena Hunting lives on the outskirts of Toronto with her incredibly tolerant family and two moderately intolerant cats. Helena writes everything from contemporary romance with all the feels to romantic comedies that will have you laughing until you cry.

Where to Find Helena:

Keira Soleore writes for the International Examiner and Cogitations & Meditations. She enjoys connecting with readers on Twitter (@keirasoleore) and through her website (www.keirasoleore.com). Her interests include medieval manuscripts, philosophy, poetry, picture books, choir, sunshine and beaches. Keira is a pseudonym.
All Posts
PrevPreviousThe Case for Sharing Romance Novels with Your Mother by Maika Moulite
NextLove Emoji Dictionary: the best emojis to send to your Significant OtherNext