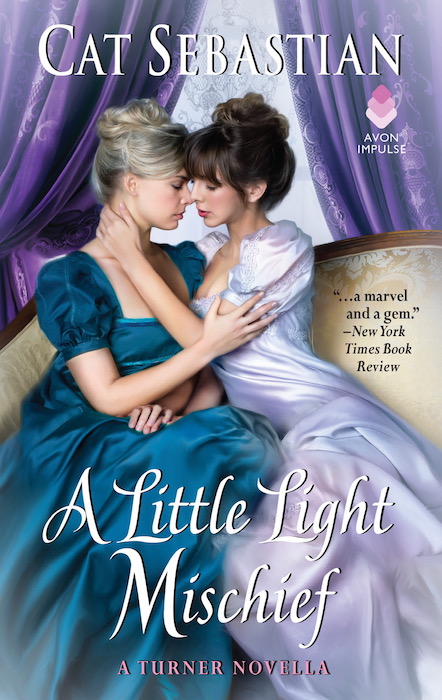 We are so excited to bring a little excerpt from the fabulous pen of Cat Sebastian.

About A Little Light Mischief, out August 6th!

Lady’s maid Molly Wilkins is done with thieving — and cheating and stabbing and all the rest of it. She’s determined to keep her hands to herself, so she really shouldn’t be tempted to seduce her employer’s prim and proper companion, Alice. But how can she resist when Alice can’t seem to keep her eyes off Molly?

For the first time in her life, Alice Stapleton has absolutely nothing to do. The only thing that seems to occupy her thoughts is a lady’s maid with a sharp tongue and a beautiful mouth. Her determination to know Molly’s secrets has her behaving in ways she never imagined as she begins to fall for the impertinent woman.

When an unwelcome specter from Alice’s past shows up unexpectedly at a house party, Molly volunteers to help the only way she knows how: with a little bit of mischief.

Outside, night had fallen and the wind was bitterly cold. Alice tried to wrap her pelisse more tightly around herself, but the cold seeped through the layers of wool and silk right to her bones.

“It’s less than half an hour if we walk quickly,” Molly said, her gaze straight ahead. “You’ll live.”

“Perhaps we ought to take a hackney?” Walking through a strange part of London in the dark, unaccompanied by a man, seemed a poor idea regardless of the weather. “I have a few shillings.”

“Bollocks on shillings,” Molly said, striding briskly along the pavements. “Bollocks on hackneys. I always walk, and since you’ve decided to tail me, you’ll walk too.”

Alice felt the heat of embarrassment spread through her body, the only warmth in her. “I do apologize—”

“Bollocks on that too.”

Alice didn’t quite know how to argue with that. She wasn’t accustomed to hearing coarse language. For all her father’s faults, he had always spoken like a gentleman, although now it occurred to Alice that she might prefer a bit of honest profanity to the alternating miseries of crockery-throwing and sermonizing. Surely she ought to be shocked and insulted to hear herself addressed in such a rude and common manner, but she found that Molly’s vulgar words gave her a frisson of excitement. Molly’s total lack of deference, her failure to stand on ceremony with a gentlewoman, ought to feel like an insult, but instead made Alice feel warm despite the chill in the air.

“Are you quite certain it’s safe?” Alice ventured.

“Lord,” Molly said with a huff of laughter. “I’d like to see anybody try and bother us. I’ve three knives and a reputation for bloodshed.”

Good God. What did that even mean?

“The only real danger is that you might freeze to death,” Molly continued. “Do they not have weather in Norfolk or wherever it is you’re from?”

Oh, if she only knew how cold it had gotten at the vicarage. “I used to wear wool stockings and flannel petticoats. Sometimes three or four petticoats at a time.” And so many shawls that she now felt quite naked without one.

Molly was silent a moment. “And now you don’t.” There was something in her voice that Alice couldn’t quite make out. Something a bit rough.

“Of course not. You know perfectly well what undergarments ladies wear in London. Only a chemise and a couple of thin petticoats. I don’t even wear a corset most days. You dress Mrs. Wraxhall several times a day. You know all this.”

“Yeah, but I don’t think about it.” Before Alice could reflect on whether this meant that Molly thought about Alice’s underthings, or lack thereof, Molly spoke briskly. “Anyway. Come close. I don’t know how either of us would explain it to Mrs. Wraxhall if you caught a chill. Last thing I need is a corpse.” She tugged Alice against her, looping her arm through Alice’s.

Alice nearly lost her footing at the warmth and softness of the other woman. She almost tripped over her feet and landed in a gutter.

Worse, she nearly pressed closer into Molly’s side, trying to feel that softness with her own body.

And then she did it anyway.

Molly smelled like Mrs. Wraxhall’s eau de toilette — either she helped herself or some of the perfume had rubbed off her mistress’s garments — mixed with the sweet, soapy smell of babies. It was such a normal scent, the sort of thing any woman might smell like. She did not know why she had expected Molly to smell like mystery and intrigue, foreign perfumes and rich musk. Instead she smelled like a person who had a job and a child and a purpose in life, not merely a vague infinity of breasts and hips and crooked grins.

From time to time, Alice had found herself looking a little too closely, too warmly, at a woman. At home it had been the curate’s sister, then the landlady at the inn. At first, she reassured herself that everyone must have this difficulty: women’s bodies were just good and one did enjoy looking at good things. One didn’t want to ogle, but it was like admiring a particularly well-iced cake, that was all. Perfectly natural. Later, she had to acknowledge that her thoughts about women did not much resemble her thoughts about cake, however well iced. So she averted her eyes and kept herself busy and tried not to think overmuch about what any of it meant.

With Molly this close, she had to think about it.

Molly stopped walking and cleared her throat. Alice frantically scrambled for something to say to explain why she was pressing up against Molly’s body like a cat, but tonight she was behaving like a lunatic and couldn’t even manage the simplest excuse for her actions. It was as if she hadn’t amassed a lifetime of experience in placating and excusing. She settled for the next best thing, which was straightening her back and trying to pull away.

But Molly’s arm is now wrapped around Alice’s waist, tight as a vise.

“You’re cold all the way through,” Molly said. Then the arm was gone, and Molly was pulling off her own cloak and wrapping it around Alice.

“But you’ll get cold,” Alice protested.

So had Alice, but she was out of practice.

Molly pulled the cloak tight across Alice’s chest, but then apparently forgot to remove her arms, because she stood so close to Alice that their breaths mingled into a single cloud in freezing air. 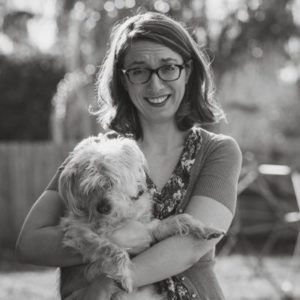 Cat writes steamy, upbeat historical romances. They generally have at least one LGBTQ+ main character and always have happy endings.

Cat lives in a swampy part of the South with her husband, three kids, and two dogs. Before her kids were born, she practiced law and taught high school and college writing. When she isn’t reading or writing, she’s doing crossword puzzles, bird-watching, and wondering where she put her coffee cup.

Where Romance and Pop Culture Live Happily Ever After.
All Posts
PrevPreviousA Beta-hero, an Alpha-aunt, Jane Austen, and Me by Anne Gracie
NextWhat’s in Your Search History: Romantic Suspense EditionNext