Exclusive Excerpt: ‘A Rogue by Night’ by Kelly Bowen 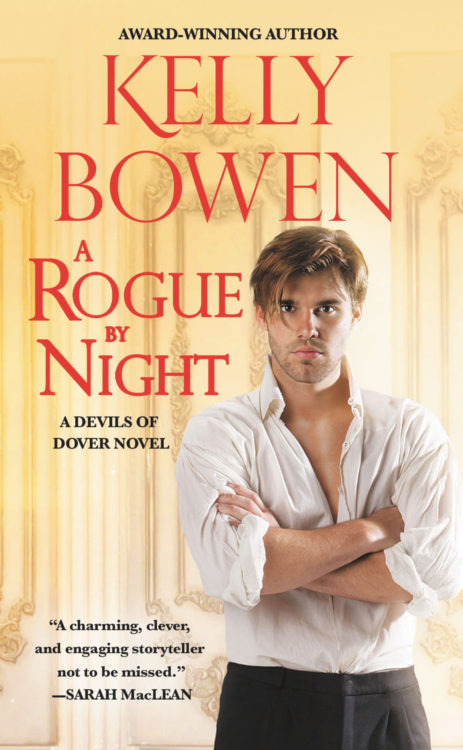 About A Rogue by Night by Kelly Bowen, out May 28th!

Baron. Physician. Smuggler. Harland Hayward is living a double life as an aristocrat by day and a criminal by night. As a doctor, Harland has the perfect cover to appear in odd places at all hours, a cover he uses to his advantage. He’s chosen this life to save his family from financial ruin, but he draws the line at taking advantage of the honest and trustworthy Katherine Wright.

Katherine thought she was done smuggling. Having finally convinced her ailing father and injured brother to abandon their criminal pursuits, she’s returned to England to help them escape to a new life — once she helps them fulfill their last contract. And that means working with Hayward, even when her instincts tell her that becoming his ally may be a risk to her heart — as well as her life.

“I have a proposition for you,” the Lord Doctor said.

“I beg your pardon?”

“Not what you’re thinking. I haven’t come up with something nearly artful enough for that.” The baron sounded like he was teasing her.

“I need help with a patient. Four patients, to be precise.”

“I see.” She aimed for a distant, detached tone. The Lord Doctor was giving Katherine the perfect exit from a conversation about love and propositions and unspeakable regrets. She grasped it with vigor. “What’s their diagnoses?”

“I’m not entirely sure. Malnutrition, certainly. Topical lesions and subsequent infections most likely. Broken bones are a definite possibility, some old, some more recent. I am told that amputation may be a distinct possibility.”

Katherine frowned. “How do you not know? Haven’t you seen them?”

That made no sense. “Where are they?”

“You heard me. They’re in London. And I need you to come with me.”

“No.” It was instant. And harsh. It had to be, because there was a part of her that wanted to say yes. The same reckless, foolish part that had been drawn to this man from the moment she met him. But she had been down this road before. Had followed a man she wanted to be with so very badly across half a bloody continent. She’d let her feelings and longings blind her until the truth had shredded her heart and nearly broken her.

“You could at least consider it.” He was studying her.

“Surely there are other doctors in London that you can ask.”

Harland shook his head. “No. There aren’t. Not for this.”

“I can’t leave my father. He isn’t well. And I just put four dozen stitches in my brother. He’s not back on his feet yet.” Those were the easy excuses.

“I’ll have Suzette look in on your father and brother while we’re away. Your father’s condition, while chronic, will not worsen measurably in the next sennight. And if Matthew’s wounds were going to fester, there would be visible evidence by now. He’ll be fine—”

The baron didn’t move. His expression didn’t change; his voice didn’t waver. “It’s a paid position. A position that will earn you far, far more than what you’ve been paid to teach at Haverhall.”

Katherine could feel her hands curl, her fingernails biting into her palms. The Lord Doctor was good, she would give him that. He drove straight for the soft, vulnerable spots.

“Yes. One today. You’d be back in time to teach the second. You won’t miss your teaching wages on my account. What I’m offering is a chance to augment them significantly.”

Back to twisting the knife in her most vulnerable place. “Why me?”

“Because I need a competent field surgeon who understands the value of utter discretion.”

A horrible notion struck her. “Are you blackmailing me?”

“What?” The Lord Doctor straightened as if she’d slapped him.

“My discretion in return for yours? I do this for you, and you keep my secrets from the cove this morning?”

“Jesus.” He shook his head. “No, Katherine, I’m not blackmailing you. God. What sort of man do you think I am? What do I have to do to prove to you that I am not—” He stopped and visibly gathered himself.

She had finally provoked him. Only to discover that there was no victory in that.

“I am asking for your help. Not because I wish to bed you or blackmail you or anything else that that suspicious mind of yours has come up with. But because you are a competent surgeon. A competent surgeon who can be trusted.” His words were hard.

Katherine looked away, feeling uncomfortable. “These London patients. Where are they? Specifically?”

The military base just east of London proper. “They’re soldiers?” At least that was familiar ground.

She frowned. It had been a long time since Katherine had been to the Warren, but she recalled barracks, a foundry, wood-yards, and thick-walled artillery repositories. A host of other buildings bunched along the banks of the Thames whose purpose she could only guess. And tethered to those banks and mudflats, great, hulking husks of ships long past their prime, crammed full of prisoners who—

“Prisoners.” The description he’d given would be accurate. The predicted injuries and his lack of real assessment.

“When we treat them, they will no longer be prisoners.”

Katherine’s eyes snapped back to his, everything suddenly very clear. His request for utter discretion. Why he had asked her, of all people in the first place, medical competence notwithstanding. And why Harland Hayward had, at every step, demonstrated a complete indifference to the smuggling that surrounded him. Because it seemed that he dabbled on the other side of the law too. “They’ll be fugitives.”

“French fugitives,” Harland said, a hint of challenge in his voice. “Seamen. Captured during the war and held here for these last years. The youngest was twelve when he was taken.”

It made her want to weep. God, she hated war and all its aftermath. There was no glory or honor in it, no matter what the poets said. It was only a dark morass of death and cruelty and pain and hopelessness that swallowed everything in its path. The lucky merely survived. And never looked back if they wanted to keep surviving. 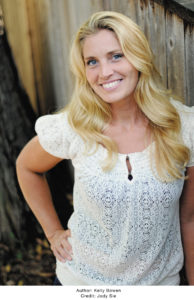 RITA-award winning author Kelly Bowen grew up in Manitoba, Canada. She attended the University of Manitoba and earned a Master of Science degree in veterinary physiology and endocrinology. But it was Kelly’s infatuation with history and a weakness for a good love story that led her down the path of historical romance. When she is not writing, she seizes every opportunity to explore ruins and battlefields. Currently, Kelly lives in Winnipeg with her husband and two boys, all of whom are wonderfully patient with the writing process. Except, that is, when they need a goalie for street hockey.

Where Romance and Pop Culture Live Happily Ever After.
All Posts
PrevPreviousBang of Thrones: Happy Mother’s Day Cersei!
NextFive Times My Jaw Dropped During the Supernatural Season FinaleNext