Exclusive: Excerpt of A Convenient Fiction by Mimi Matthews 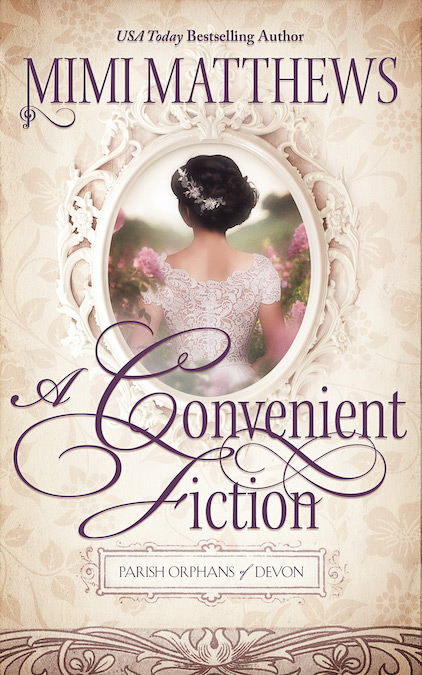 We are so excited to share with you an exclusive excerpt from Mimi Matthews’s new book A Convenient Fiction out today!

About A Convenient Fiction:

She Needed a Husband…

It’s been three years since Laura’s father died, leaving her and her invalid brother to subsist on the income from the family’s failing perfume business. But time is swiftly running out. What she needs is a husband, and fast. A noble gentleman who can rescue them all from penury. When a mysterious stranger arrives in the village, he seems a perfect candidate. But Alex Archer is no hero. In fact, he just might be the opposite.

He Wanted a Fortune…

Alex has no tolerance for sentiment. He’s returned to England for one reason only: to find a wealthy wife. A country-bred heiress in Surrey seems the perfect target. But somewhere between the village railway station and the manor house his mercenary plan begins to unravel. And it’s all the fault of Laura Hayes—a lady as unsuitable as she is enchanting.

From the beaches of Margate to the lavender fields of Provence, a grudging friendship slowly blossoms into something more. But when scandal threatens, can a man who has spent his entire life playing the villain, finally become a hero? Or will the lure of easy riches once again outweigh the demands of his heart?

Mr. Archer turned back to her, a glint of wry humor in his eyes. “I can keep a secret, Miss Hayes.”

“I expect you can. But these aren’t just my secrets. They’re my family’s secrets.”

“I’ll guard them as if they were my own.”

Laura didn’t know why, but she believed him. And she wanted to unburden herself. Needed to most desperately. “I’ve told you about my father’s perfume business.”

His mouth hitched at the corner in that wolfish way of his. “Hayes’s Lavender Water, suitable for mothers and sweethearts alike.”

“Yes, well…since my father’s death, the business—what remains of it—has been under the control of his solicitor.”

“The fellow you visited in London?”

“An odious gentleman who won’t permit us to do as we like with the property that was left to us.” She walked deeper beneath the branches, arms folded at her waist. “It’s meant to come to my brother at his majority, but yesterday…I learned that Mr. Weatherwax is refusing to cede control.”

Mr. Archer followed after her into the deep shadow of the yew tree. He removed his hat. “Can he?”

“He says that my brother is unfit, purely because he’s an invalid. He says that he’ll happily take us to court to prove it. Unless I can find a way to challenge him, my family must resign themselves to living on the quarterly allowance he provides us. It isn’t enough. Not nearly.”

“I suppose it’s out of the question to simply ask the man for more money?”

“There isn’t any more. But there could be. There could be. If only the business were in the hands of someone who wasn’t afraid to take a few risks.”

She nearly laughed. “Not my brother. Me.”

“You don’t.” She could read as much in his face. “You think I’m just a silly impetuous female. But sometimes, Mr. Archer, in life as well as business, we must be bold. We must risk everything to gain even more. And so I would have done if my brother gained control.”

But he didn’t answer.

She bit her lip. Despite the intimacy of their previous meetings, he was still practically a stranger. His approval shouldn’t mean anything to her one way or the other. But it did. For whatever reason, it meant a great deal.

“What recourse do you have against your solicitor?” he asked.

Laura exhaled. “Very little, as far as I can tell.”

She refused to mention the possibility of her marriage. It was less than two weeks until her twenty-fifth birthday. So…not even a possibility anymore. Not unless some noble, heroic figure were to gallop up on a white horse and carry her away to Gretna Green.

“The only thing I can think of is for us to hire another solicitor to challenge Mr. Weatherwax’s authority. But—” She blushed. “We can’t afford it.”

Mr. Archer’s gaze seemed to soften. “You needn’t be embarrassed.”

She turned her face from his. She couldn’t bear to see him looking at her with compassion—or, even worse, pity. “I’m not embarrassed. There are others far worse off than we are. But when I think of Teddy, and all the things we could be doing to help him get well, if only…” A bitter laugh emerged from her throat. “If only. The two most useless words in existence.”

“And two of the most oft uttered.”

She leaned her back against the tree trunk, forcing herself to once again meet his eyes. “I’ve written to a solicitor in London. I hope to hear from him by the end of the week.”

Mr. Archer rested his hand on the trunk. It was inches from her shoulder. “How much do you require to hire him?”

“I don’t know yet. Whatever it is, I intend to ask Miss Talbot to lend it to me.” She gave him a humorless smile. “Perhaps you and I aren’t so very different after all. Each of us hoping to gain a little of her fortune.”

He arched a brow. “Only a little?”

“All of it, in your case. Unless you’ve changed your mind about pursuing her?”

“Is there any reason I should?”

Laura didn’t answer. She could think of several reasons. But she didn’t want to talk to him about Henrietta.

“Miss Hayes,” he said. “If you need money for a solicitor, it would be my privilege to give it to you.”

His offer was as surprising as it was unseemly. Any lady would be properly offended. And Laura was, to a certain degree. At the same time, an unsettling surge of gratitude clogged her throat, just as when he’d offered her coins at the wishing bridge. “I’m obliged to you, but…I could never accept it. You must know that.”

“For the obvious reasons. Because you’re a single gentleman, and I’m an unmarried lady. It would be scandalous to accept money from you.”

“I don’t see why. No one would ever have to know about it. It could be our secret.”

She frowned at the thought. “And then I’d be indebted to you.”

“It would still put me under an obligation.”

“Would that be so bad? To be obligated to me in some way?”

“I believe it would. Besides, if the solicitor fails to wrest control from Mr. Weatherwax, I’d have no way to repay you.”

“I think you might,” he said. And then, before she had a moment’s inkling of his intention, he bent his head to hers and kissed her, very gently, on the lips.

A flush of unexpected warmth infused Laura’s veins. For the barest instant, her mouth softened under his. And then—

Common sense returned with all of the force of a steam-powered locomotive.

She jerked back from him with a start, nearly conking her head against the tree trunk. “I beg your pardon!”

Mr. Archer stared down at her. He appeared as stunned as she felt. Indeed, to judge from his slack-jawed look of astonishment, one might think she’d transformed into some variety of mythical creature at the merest touch of his lips. A mermaid, perhaps.

Or a two-headed monster.

It was a lowering thought.

His hand fell from the tree. “Miss Hayes—” He broke off. “Laura—”

“Don’t,” she warned him. “Don’t dare presume some greater intimacy—”

“Forgive me.” He took a step back from her. “I don’t know what I was thinking.” An incredulous laugh. “Nothing, apparently. I think I must have run mad.”

Laura was glad of the set down, however unintentional. She’d rather be angry and insulted than hurt—or tempted. “Do you often go about kissing ladies in such a hurly-burly fashion?”

“Never.” He raked his fingers through his hair. “Truly, Miss Hayes. I’m sorry for having offended you. I daresay it was all of this talk of boldness and taking risks. I lost my head for a moment. It won’t happen again.”

His apology should have mollified her. He meant it—anyone could see that. And she did believe him. He wouldn’t kiss her again.

She should have been relieved. Instead, she felt vaguely disappointed.

Brief though it was, Mr. Archer’s kiss had been nothing like George’s. Her heart was still thumping rapidly from the wonder of it. So soft and tender—and so very surprising to them both.

“Why did you do it?” Her voice was almost a whisper. “Is it because I’m in reduced circumstances? Because I haven’t a father or a brother to defend me from—”

“No.” His denial was quick and fierce. “It has nothing to do with your station in life. My God. If you only knew—”

“Because…there’s something between us. Some thread of connection. I feel it every time I look at you.”

He gave her a tormented look. “Do you?”

She nodded. There was no point in denying it. “I wish I didn’t feel it.”

“I wish the same. But now we’ve acknowledged it…perhaps we’ve robbed it of its power. We can move on. Forget any of this ever happened.”

“Can you forget?” she asked.

Mr. Archer settled his hat back on his head. “I’m sure as hell going to try.”

USA Today bestselling author Mimi Matthews writes both historical non-fiction and proper historical romances set in Victorian England. Her articles on nineteenth century history have been published on various academic and history sites, including the Victorian Web and the Journal of Victorian Culture, and are also syndicated weekly at BUST Magazine. In her other life, Mimi is an attorney. She resides in California with her family, which includes an Andalusian dressage horse, two Shelties, and a Siamese cat. Find Her Here: https://www.mimimatthews.com/

Where Romance and Pop Culture Live Happily Ever After.
All Posts
PrevPreviousBook Nerdery with Avery Flynn and Christina Lauren!
NextWhy This Stay-At Home Mom Loves Audiobooks and You Should TooNext