Exclusive: Excerpt of Bad for You by Taylor Holloway 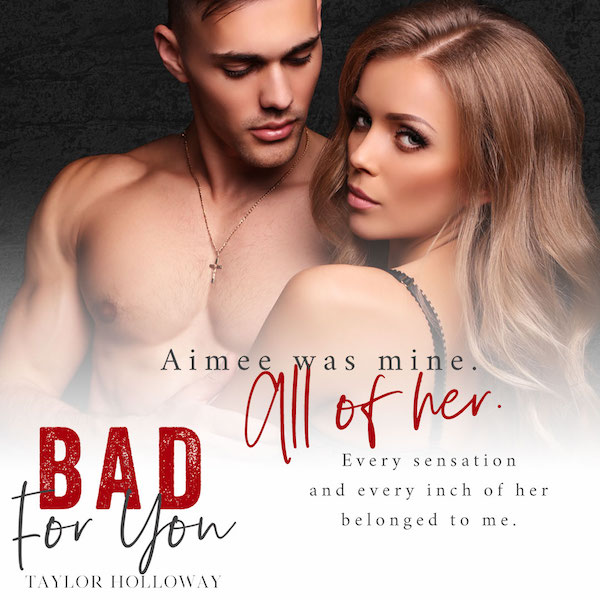 We are so excited to share with you an exclusive excerpt from Taylor Holloway’s new novel Bad for You out now!

About Bad for You:

The boy next door.
Star of my teenage fantasies.
My tormentor.

After serving as an army doctor in some of the most dangerous places on Earth, Brandon has finally come home. And he’s brought his cocky, alpha attitude and rugged good looks with him. To my hospital. He’s still a loose cannon and I’m right in his sights.

But instead of begging for him to stop, this good girl is having to stop herself from begging for more.

I thought I put my obsession with this moody bad boy to bed.

It now appears that’s right where he wants me.

But this time I’m worried I’ll pick the one that’s bad for me, even if Brandon feels oh so right.

Add it to your TBR pile now: bit.ly/BadforYouGR
Follow Taylor on Bookbub: https://www.bookbub.com/authors/taylor-holloway 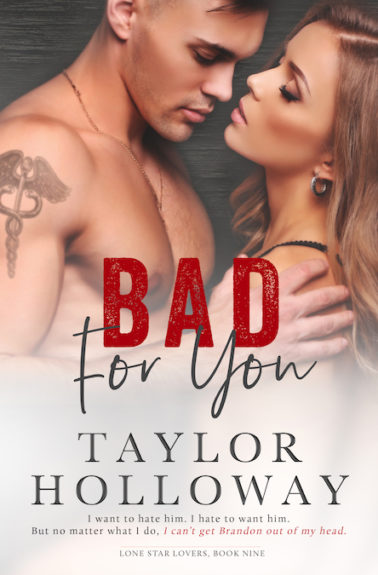 “Coward!” Aimee yelled, stomping behind me straight into the men’s locker room and grabbing me by the arm. “Don’t run away from me.”

My jaw went slack. She followed me in here? Was there no escape from her? She was persistent, and generally I admired that quality, but not at the moment. At the moment it was just plain old irritating. I couldn’t wait to get away from her.

“Aimee, what are you doing?” I asked her. I shook my head in annoyance and shrugged out of her grip. “You shouldn’t be in here. This is the men’s locker room in case you didn’t realize it.”

Her blue eyes rolled back and then focused on me. They narrowed dangerously and she stalked closer, invading my personal space. “I don’t care whose locker room it is, Brandon. It could be Jesus’ locker room for all I care. You don’t get it, do you? You can’t just order me around and bully me anymore. I have a job to do and if you don’t want to lose yours here, you’re going to help me do it.”

“Maybe I want to lose my job at this god-forsaken hospital,” I snapped back irritably. “Why don’t you just put that in your report and get out of here.”

She drifted closer to me still, pinning my back to a locker. It should have been hilarious, because she barely came up to my chin and was the opposite of physically intimidating, but it wasn’t. My heart hammered in my chest for reasons that had nothing to do with fear or humor. I had a sudden, vivid fantasy of kissing her and I hated her even more for it. There was no one here with us. I could do it. I wondered if she’d let me. Probably not.

Why did she have to be so goddamn beautiful now? When she was a chubby, awkward tween it was so easy to transfer my hatred of my mom’s cancer to an annoying interloper who showed up in my life to hang out in my backyard and steal my dad’s attention. The fact that she had a huge crush on me only made it worse. I’d made it my mission to drive her away and ignore her existence, as if it could make my mom’s illness go away too. In my own teenage confusion, I thought that if I could drive her away, I could make my own life normal again. Ignoring her then hadn’t worked. Ignoring her now was fucking impossible.

Aimee was now a striking, perfectly proportioned beauty, with lush curves, shiny golden hair, and perfect skin. She effortlessly commanded far more of my attention than I wanted to admit. Somehow, it made me hate her even more. Hate and attraction battled for supremacy in my brain. They both won.

“Why did you hit that patient?” she questioned, pressing a hand against my chest to keep me in place. Her voice was calm and superior. It irked me that she had thrown me so thoroughly off guard.

“What does it matter? You’ve already made up your mind that I’m in the wrong.”

“Is it? That wasn’t what the army taught me.”

“This isn’t the army. This is a hospital. We’re in Texas, not Kabul.”

“Oh, gee, thanks for that. I forgot.” I rolled my eyes at her. “Listen,” I continued. “Sometimes hitting is necessary.”

“No, it’s not! Even little kids know they’re supposed to keep their hands to themselves.”

“What about that time I punched Hunter to keep him off you? Was that wrong?”

Her mouth dropped open in apparent disbelief. Then it closed into a pouty line. “It’s not the same. Hitting patients is always wrong.”

“What are you expecting? An apology essay?”

“It would be a start. I need that statement.”

“Why am I not surprised you can’t follow simple instructions?” she huffed. “I see you haven’t learned anything about responsibility or compassion at all in the last ten years. You’re still the same bully you always were, only now you’ve got a stethoscope and an even heavier chip on your shoulder.”

I wasn’t thinking clearly at all. This day had been hellish from start to finish. And now, Aimee Ford had decided to invade my personal bubble and stare up at me with those beautiful blue eyes and fiery attitude. I could feel the heat of her body, and I didn’t know what to do with my need for it.

Had her eyes always been that incredible color? Maybe I never noticed them behind her thick glasses.

“You don’t wear glasses anymore,” I heard myself saying in a voice that was more curious than irate. “Did you get Lasik surgery?”

She blinked. “What?” Her expression shifted and she flushed. “No. I didn’t get surgery… I’m not a candidate because of my astigmatism, but I, um, I wear contacts now.” I’d knocked her off her guard.

I seized the upper hand while I could. Before she could entrance me more, I had to shift the balance between us. If she could be distracted by personal conversation, maybe I could get out of this situation. She’d always been attracted to me. Maybe all I needed to do was make her physically uncomfortable? I could do that. It seemed only fair. After all, she was so very distracting with her little pout and huffy attitude.

I started unbuttoning my shirt in the narrow confines between the locker and Aimee’s body. Her eyes widened in shock and I cocked an eyebrow at her.

“What are you doing?” she stuttered. She inched back from me, giving me about six inches of space to work with. Her face went beet, glowing red.

“Undressing,” I told her, shrugging out of my button-down and peeling off my undershirt. I stretched to give her an extra-good view of my body. “This is a locker room, you know. I think I’ll take a shower.” My voice was dry. I started on the buttons of my jeans. “You might want to leave now. I’m done talking to you.”

“Stop,” she ordered, staring at me in something that looked like horror and interest mixed together. “You don’t say when we’re done. I say when we’re done.” I started working my pants down my hips, nice and slow. Her eyes were locked on my lower body. “I’m talking to you about the patient you hit?”

Did she mean for that to come out as a question? I doubted it. Her eyes were huge in her face when I stepped out of my jeans and fished a towel out of my bag.

Somehow, getting undressed and watching her become incredibly uncomfortable made me feel a lot better. I could feel her eyes crawling up and down my torso. Did she like my tattoos? My six pack? It felt good to have the upper hand with her. Too good. Especially while she was flushing that nice, bright pink color.

I decided to answer her question since she was still staring. “The abusive, drunk dick-wad that tried to smack his pregnant girlfriend right in front of me?” I asked her sarcastically as she ogled me. “That guy? I’m sorry, but I had to protect her and the baby even if he was technically the patient. I’m so sorry if that violated hospital protocol by preventing an assault on a defenseless pregnant woman. I would think you of all people would realize that sometimes protecting someone requires physical intervention.”

Aimee frowned and she stood up straighter, snapping out of her trance a little bit. “He tried to hit a pregnant woman?” She paused. “I mean, he was obviously intoxicated, so you’re probably covered, but still…” she trailed off weakly.

My total disgust at the situation was probably the only thing preventing me from yelling. The fact that everyone blamed me was infuriating. “In the exam room, yeah. But you didn’t give me a chance to explain. ”

“That changes things,” she admitted in a small voice. She shifted from foot to foot uncomfortably and bit her full bottom lip.

“Perhaps if anyone had given me the benefit of the doubt, I could have explained all this a lot earlier,” I groused. The parallels to that time with Hunter and my dad flashed through me. I was still irritated, all these years later.

“Maybe if you didn’t go around acting like a loose cannon all the time somebody would,” she retorted.

I didn’t have a response to that. She could’ve been right. We stared at one another for a long moment. It suddenly dawned on me that I was standing in front of her in just my boxers, and that we were completely alone. Hot tension rose between us, swirling like the mist from the showers to our left.

“Do you want to see me naked now or do you have everything you need?” I asked her.

Her cheeks turned that pretty red color again. “What?” she stuttered.

I gestured to my near-nakedness and her pupils dilated wide.

Then her full, pink lips parted, and I lost the battle against my attraction to her. Without thinking, I pulled her against my chest and kissed her like my life depended on it.

Taylor Holloway is a bestselling romance author who writes sweet and sexy stories with just enough of an edge to offset all the feels. Her books are specifically Taylor-ed to make you blush, cry, laugh, and swoon. She’s an Austin native with a penchant for bad puns, strong margaritas, expensive shoes, and shiny things. When she’s not writing, she’s working a hilariously bland corporate job, spoiling her husband and cat, or going for long walks in the dark.

Where Romance and Pop Culture Live Happily Ever After.
All Posts
PrevPreviousContemporarily Ever After: Top Picks for the Week of October 6th
Next#TBT Recs: Ghosts & Reincarnation StyleNext