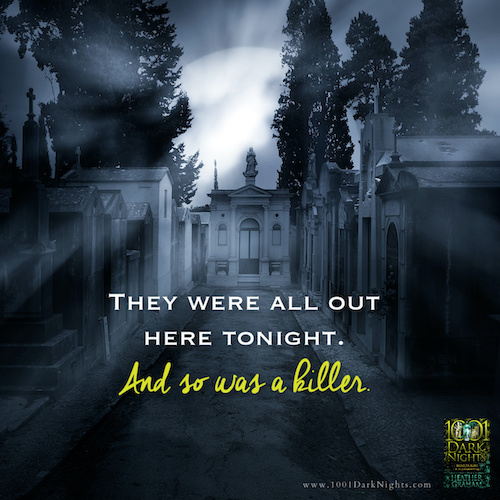 We are so excited to share with you an exclusive excerpt from Heather Graham’s new 1001 Dark Night’s novella Blood Night out tomorrow! 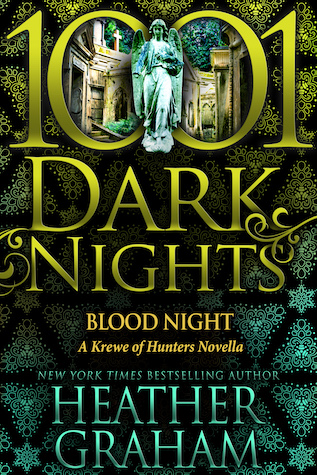 Any member of the Krewe of Hunters is accustomed to the strange. And to conversing now and then with the dead.

For Andre Rousseau and Cheyenne Donegal, an encounter with the deceased in a cemetery is certainly nothing new.

But this year, Halloween is taking them across the pond—unofficially.

Their experiences in life haven’t prepared them for what’s to come.

Cheyenne’s distant cousin and dear friend Emily Donegal has called from London. Murder has come to her neighborhood, with bodies just outside Highgate Cemetery, drained of blood.

The last victim was found at Emily’s doorstep, and evidence seems to be arising not just against her fiancé, Eric, but against Emily, too. But Emily isn’t just afraid of the law—many in the great city are beginning to believe that the historic Vampire of Highgate is making himself known, aided and abetted by adherents. Some are even angry and frightened enough to believe they should take matters into their own hands.

Andre and Cheyenne know they’re in for serious trouble when they arrive, and they soon come to realize that the trouble might be deadly not just for Emily and Eric, but for themselves as well.

There’s help to be found in the beautiful and historic old cemetery.

And as All Hallows Eve looms, they’ll be in a race against time, seeking the truth before the infamous vampire has a chance to strike again.

“I hear you two are intrigued. And I’m impressed,” he gushed. “You’re from Louisiana, right? They have quite amazing cemeteries there, as well, yes? Cities of the Dead! One day, I’ll get there.”

“Yes, we’re from Louisiana, but we live in D.C. now,” Andre told him. “And this…well, it’s huge, for one. And the landscaping…remarkable.”

“So many buried here,” Monte told him. “You don’t mind walking, do you?”

“Not at all,” Cheyenne assured him. “We’re grateful to you.”

“Inspector Michael Adair.” Monte lowered his voice slightly, though there was no one around to hear.

“He and old Birmingham get along all right, but Mike thinks Birmingham is being a wanker. There’s no reason you shouldn’t be here—and helping if possible. So, cousin Mikey called to make sure I gave you the old A-1 tour. And I hope to!”

“The stakes are high for me, eh? I mean, you come from Louisiana. I’ve seen pictures and have read up on some of your places. Fantastic.” Again, he lowered his voice. “And this Krewe thing of yours…it’s intriguing. Do you really solve just about everything?”

“We try our hardest,” Cheyenne said.

“Deep, dark secrets of the investigations?” he asked.

“We go through the academy. We work all hours of the day. Pretty much like any law enforcement officers,” Andre said.

They headed through the cemetery, Monte pointing out various special graves, either because of the person buried there or the funerary art.

One grave with an obelisk marker set by a stunning weeping angel, caught Cheyenne’s attention. The epitaph was beautiful.

Here lies she in beauty and grace,

Kind in soul and gentle in face,

And surely now with angels she soars,

Watching over all she adores,

For goodness ruled her every breath

Stolen so cruelly, unto death.

For in Heaven she will gently tread

Eternal, while flames shall fill the other with dread.

“Lovely, and so sad! I’m taking this to mean she was murdered?” she asked softly, thinking Andre was still at her side. But he was a bit away, studying a small mausoleum tomb created in the Egyptian style.

She thought he looked at the tomb but also…

New York Times and USA Today best-selling author Heather Graham has always been an avid reader, from classics to sci-fi, mystery, horror, thriller, romance, and all kinds of non-fiction. She’s fairly certain that her mom’s deliciously crazy family–arriving in the US a bit before her birth from Ireland–gave her the love of storytelling. She started out in theater and commercials, but once her children began to arrive, she stayed home and gave writing a try. She’s incredibly grateful to be doing what she’s doing for a living. Heather belongs to MWA, RWA, Sisters in Crime, HWA, and ITW, and has the recipient of the RWA Lifetime Achievement Award, a Silver Bullet for charitable works, and this year, she will receive the Thriller Master title from ITW. She has over 200 novels in print, and has been published in 22 languages.

Where Romance and Pop Culture Live Happily Ever After.
All Posts
PrevPreviousEverything Neal Shusterman Writes is Just So Good
NextFind Paradise at the Movies this Week!Next