Exclusive: Excerpt of ‘Devoted to Love’ by Shayla Black 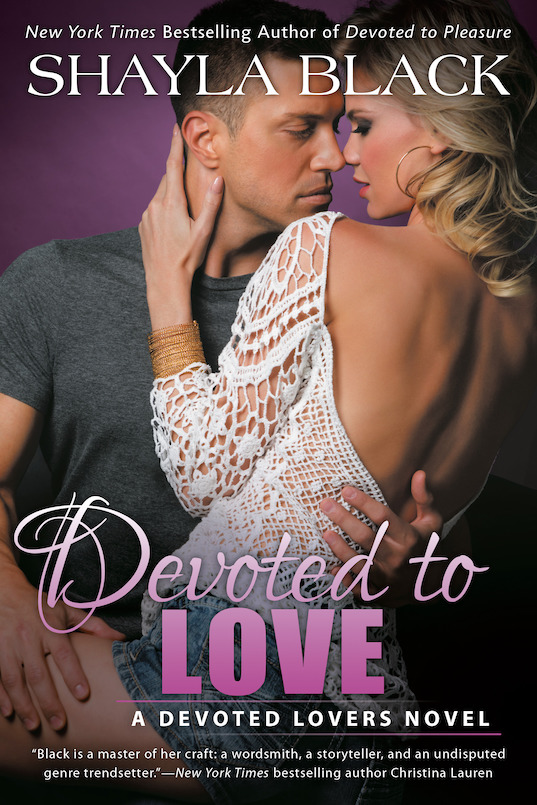 We are so excited to share with you an exclusive excerpt from Shayla Black’s upcoming novel Devoted to Love, out today!

When Josiah’s truck pulled into the yard, Maggie felt more giddy and relieved than she should.

“You sweet on him?” Granna asked as she raised her hand to her brow, shielding her face from the sun as he parked.

Josiah exited his vehicle. She held her breath as he scanned the yard. His gaze screeched to a stop when he spotted her. Maggie swallowed down something that felt suspiciously like her heart.

What the devil? She didn’t connect with people. Coupling up was definitely beyond her emotional capability. But from the second she’d set eyes on Josiah, it was if some invisible string attached them. She’d thought she had snipped that tie this morning. She’d sent him on his way, after all.

Then you stupidly flirted with him. Face it, you’re more than a little interested.

She was. And now, some subversive part of her wanted him to stay at least a little longer, see what might happen between them.

“He’s all right,” she told her grandmother.

Granna laughed. “From you, that’s almost a declaration of love. And he seems really eager to talk to you, Maggie girl.”

It looked that way. Those long legs of his, the ones he had used to spread her thighs wider and propel himself deeper inside her last night, ate the distance between them now. His gaze never wavered from her.

Lord, was she really trembling?

“You do that. I’ll wrap up with the rental company now that everything is loaded.”

Once Granna turned away to deal with the driver, Maggie headed across the yard toward Josiah, stuffing her hands in the back pockets of her jeans. If she didn’t, she’d be more than tempted to touch him again. The truth was, everything about him flipped her switch. Even when she didn’t want to want him, she did.

“Hey.” She greeted him as they neared, steps slowing.

“Maggie.” He studied her as if he could look inside her.

He hesitated. Trepidation tightened her chest.

“We should talk,” he said finally. “About a lot of things.”

Did he mean the two of them? Normally, “romantic” conversations made her shudder and run. A lot of drama for something not meant to last. Why bother? But she wanted to enjoy the time she shared with Josiah. That mattered, probably more than it should. Some part of her even fantasized about sharing more than a fling.

“All right. Papa went to see what he could find out about Ben Haney’s death, so we can use his study.”

“Let’s go.” He wrapped his arm around her waist and guided her toward the house. “The yard looks almost bare without the big white tent.”

“Doesn’t it? I’d kind of gotten used to the ranch looking like a circus.”

He nodded, but there wasn’t an ounce of levity in his expression. Something was definitely wrong.

After they entered the house, they each grabbed a bottle of water from the fridge. Nerves bunched her stomach as Josiah hustled her into the study and behind closed doors. The moment they were alone, quiet resonated. The room was so silent she could hear him breathe. The air pinged.

They sat facing each other in the guest chairs flanking her grandfather’s desk. She sensed his nerves. Yeah, this wasn’t going to be pretty.

“Just tell me,” she insisted. “Enlightenment Fields isn’t going to leave us alone, are they?”

“I didn’t even broach that with them.”

“What? The point of your visit—”

“Was to warn them away, I know. But Maggie, if I had it would have painted a target on your back. You’re in danger.”

About Devoted to Love:

He was sent to guard her body… he didn’t expect her to steal his heart.

Her sister’s wedding was hardly the place to find a hook up, but after one look at friend-of-the-groom and special operative Josiah Grant, small-town Texas beauty Magnolia West immediately fell in lust. After a stunningly sensual night together, Maggie is prepared for the two of them to go their separate ways. After all, she’s not a happily-ever-after kind of girl. But Josiah—and danger—change her plans.

Josiah isn’t looking for love…but Maggie rouses his body and stirs his heart like no other woman. She’s got a rocky romantic past, and a smart man would steer clear. But when the murder quotient in Kendall County rises and all signs point to a mysterious group nearby who have been harassing Maggie’s family, he can’t leave her unprotected—especially when he realizes he’s fallen hard for her.

As tension mounts and the menace closes in, Josiah will do anything to prove to Maggie that their love is real…but can they stay alive long enough to share it?

Raised an only child, Shayla occupied herself with lots of daydreaming, much to the chagrin of her teachers. In college, she found her love for reading and realized that she could have a career publishing the stories spinning in her imagination. Though she graduated with a degree in Marketing/Advertising and embarked on a stint in corporate America to pay the bills, her heart has always been with her characters. She’s thrilled that she’s been living her dream as a full-time author for the past ten years.

Shayla currently lives in North Texas with her wonderfully supportive husband, her daughter, and two spoiled tabbies. In her “free” time, she enjoys reality TV, reading, and listening to an eclectic blend of music.

Where Romance and Pop Culture Live Happily Ever After.
All Posts
PrevPreviousEnough. I’m Done Defending Romance.
NextTrope Rec Tuesday: Ladies of the Underworld You Need to MeetNext