Exclusive: Excerpt of Kiss Me Tonight by Emma Hart 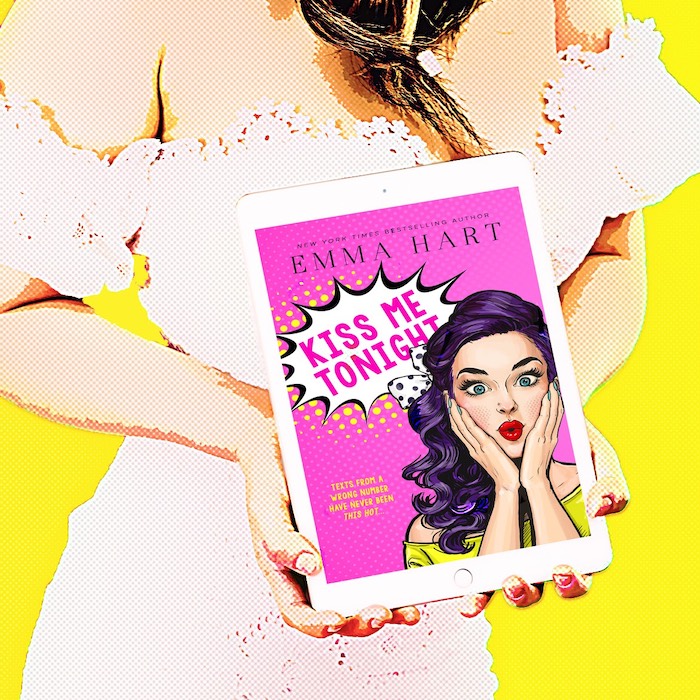 We are so excited to share with you an exclusive excerpt from Emma Hart’s new novel Kiss Me Tonight out now!

About Kiss Me Tonight:

In hindsight, I never should have opened that text message. The last thing I needed first thing on a Monday was a picture of some stranger’s, um, eggplant, in my inbox.

I also should have replaced the batteries in my fire alarm, because my Friday night did not need to end with my apartment building going up in flames.

But it’s fine. It’s fine. Everything is fine.

I’m only lying in a hospital bed with more split ends than I’ve ever had, almost all my Earthly possessions have turned to ash, and apparently, they don’t serve wine to patients in this place.

Until he walks in.

The guy who saved my life. My hero. Noah Jacobs.

And the universe is amusing itself at my expense, because the dirty photo I woke up to on Monday? 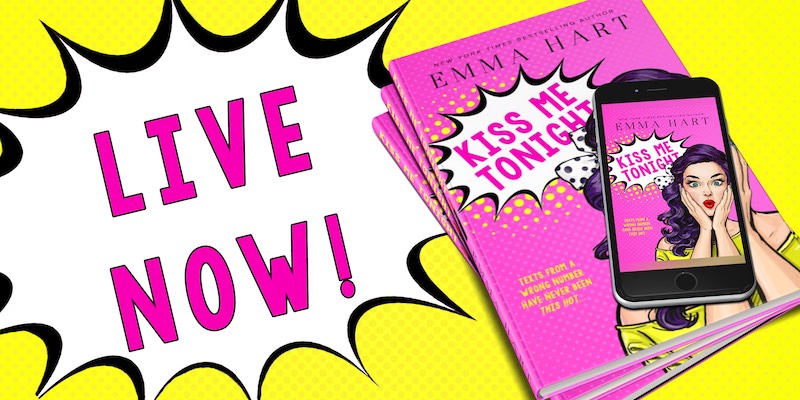 “Honestly, I’m not sure what to do now. Living with my parents is my worst nightmare, but I don’t have anywhere else to go.”

“What about your friends? The ones who saw you in hospital?”

I shook my head. “Halley—she’s the blonde—is dating my brother, and I’m not interested in hearing them get dirty whenever he stays over. Ava, the other one… Well, shit, we just couldn’t live together.”

“Because friendships are weird.”

“You’ll have to explain.”

“People say opposites attract, and sometimes that’s true for friendships, too. Halley is the mayor’s daughter; she’s the local librarian and a total bookworm even though she’s strong-willed and a ridiculous animal lover to the point there’s a pregnant raccoon living under her back porch.”

“Exactly,” I said. “Ava is a reluctant runner who works in a café on Main and is a serial dater despite her endless failures with long-term relationships. She’s emotionally shut off and in perpetual denial about said relationships even though she’s a raging romantic. That said, she’s the sweetest, most supportive person you’ll ever meet.”

“And what about you, Dr. Reagan? Where do you fit into the friendship?”

“Me? I’m the resident asshole. I’m the one who doesn’t have a filter and will tell you you’re a goddamn idiot while simultaneously accepting my own stupidity and ignoring it. I’m a huge pessimist who refuses to see the best in people because then nobody can ever disappoint me.”

“Wow.” Noah pulled his water toward him and sipped. “Sounds like you’re the walking reality check.”

“My apartment building just burned down and I’m living with my parents and crazy great aunt. I think I’ve earned the right to be a pessimist at this point.”

He grinned. “You’ve had a rough few days, I’ll give you that.”

“You think? One week ago, I woke up to some weirdo’s penis in my texts, and now I’m having lunch with him.”

Our server paused at the end of our table.

I bit the inside of my cheek and looked down as she quickly walked off in another direction.

“Thanks.” Noah met my gaze. “That was exactly how I was hoping to be introduced in a new restaurant.”

I groaned and slumped onto the table. “Oh, no, you’re one of those.”

Noah sat back and smirked. “One of what?”

I waved my hands. “I am man. Must pay for food. Woman cannot.”

Raising his eyebrows, he leaned forward. “If I’m one of those, then so are you.”

He held up his own hands and wiggled his fingers. “I’m so independent, I must pay for my food! God forbid a man buy my lunch!”

I pursed my lips, trying not to laugh at the high-pitched voice he was putting on. “Shut up. This isn’t a date, and I can pay my half.”

“I didn’t dispute this not being a date.” He pulled his wallet out and slipped out a card. “But I can want to pay for your food, can’t I?”

“You can, but you won’t.” I removed my own wallet from my purse and slapped down my card.

“We appear to have reached an impasse.” His green eyes shone with suppressed laughter.

“It’s not that hard to figure out. We split the bill based on what we ordered and split the tip fifty-fifty.”

I shook my head, my hair flying around my shoulders. “Not a chance in hell.”

“Fine.” He sighed and motioned for the check to be brought over. “You’re stubborn.”

“Yep. It’s one of my better qualities.” I grinned and all but accosted our blushing server as she brought the bill over with a card machine. She’d obviously heard our conversation because the wallet contained two receipts with our bill split.

I pulled them out with another grin in Noah’s direction and selected mine. I added the tip and handed it to the server with my card for her to charge it.

She swiped; I signed. Then she moved onto Noah who did the exact same thing, all the while glaring at me across the table.

I was trying not to laugh.

I would bet a hundred bucks that he’d never met anyone like me before. Not that I was tooting my own horn—I knew I was what normal people called ‘unique.’

I mean, my best friend fed raccoons, so compared to her…

I was only a little strange.

We both stood at the same time, and Noah held the door for me on the way out.

“Thank you,” I said softly, stepping out into the almost-stifling heat.

“Well, I saved your life. I think I can hold a door for you.”

“Are you going to bring that up every single time I talk to you?”

“Maybe. Like I said, it’s one to tell the grandkids.”

I side-eyed him. “Slow your roll.”

“I didn’t mean our grandkids. Just my grandkids in general.”

“I don’t think it works the same if I’m not your wife.”

“Nah, I’ll be like Ted from How I Met Your Mother. You’ll just be one of the women who is not The Mother.”

I hopped into the truck and, when he’d gotten in, too, said, “You do know that Ted was the absolute worst character in that show, don’t you?”

Emma Hart is the New York Times and USA Today bestselling author of over forty novels and has been translated into several different languages.​

She is a mother, wife, lover of wine, Pink Goddess, and valiant rescuer of wild baby hedgehogs.

Emma prides herself on her realistic, snarky smut, with comebacks that would make a PMS-ing teenage girl proud.

You can find her online at www.emmahart.org, www.facebook.com/emmahartbooks, or join her reader group at http://bit.ly/EmmaHartsHartbreakers.

Where Romance and Pop Culture Live Happily Ever After.
All Posts
PrevPreviousDaily Frolic: The Good Place AND Superstore Return Tonight!
NextThe Five Most Common Questions Asked of a Romance WriterNext