Exclusive: Excerpt of Most Ardently by Susan Mesler-Evans 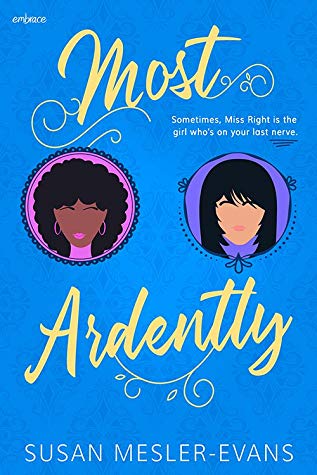 We are so excited to share with you an exclusive excerpt from Susan Mesler-Evans’s new novel, Most Ardently, out now!

Elisa Benitez is proud of who she is, from her bitingly sarcastic remarks, to her love of both pretty boys and pretty girls. If someone doesn’t like her, that’s their problem, and Elisa couldn’t care less. Particularly if that person is Darcy Fitzgerald, a snobby, socially awkward heiress with an attitude problem and more money than she knows what to do with.

From the moment they meet, Elisa and Darcy are at each other’s throats — which is a bit unfortunate, since Darcy’s best friend is dating Elisa’s sister. It quickly becomes clear that fate intends to throw the two of them together, whether they like it or not. As hers and Darcy’s lives become more and more entwined, Elisa’s once-dull world quickly spirals into chaos in this story of pride, prejudice, and finding love with the people you least expect. 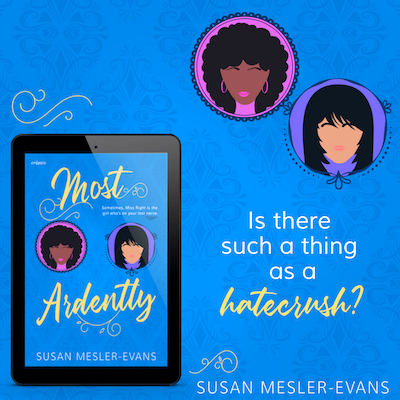 Elisa got to class ten minutes ahead of schedule, and was surprised to find that she wasn’t the only one. Sliding into an empty seat in the front row, she cast her brown eyes around, surveying the other early birds. She was clearly the youngest person there, though not by much – she was eighteen, and most of the others looked to be in their twenties or so. A couple of jocks sat in the back row, huddled over someone’s phone, and three girls sat in the row behind Elisa, chattering away about their summer vacations. The professor, it appeared, wasn’t there yet.

Another girl, who couldn’t have been much older than her, sat alone at the end of her row. With her warm brown skin and wavy hair, she was…

Well, I certainly don’t use the phrase “prettiest girl I’ve ever seen” lightly.

She’d brought a book with her, and seemed determined to not look at, much less make eye contact with anyone else in the room.

Elisa, deciding to take her chances with the only other unoccupied person in the room, offered the girl a smile and a small wave.

The other girl’s dark eyes left the book she’d brought with her, and Elisa got the impression she hadn’t noticed her until just now. “No.” Her voice was lower than Elisa had expected, and so soft, she almost wasn’t sure she’d actually said anything. “I started last semester.”

“Did you go to Steventon Public High? I don’t think I ever saw you. I’m actually a senior there. They said I finished all my credits earlier than they thought, so I could start here early if I wanted.”

When Elisa had been offered the chance, she’d had three thoughts at once:

Hey, being a teacher’s pet who never goes outside finally paid off.

Wait, does this mean I don’t have to do the application essay?

I never have to fight through the demonic circle that is the west hallway to get to my locker ever again? TAKE ME NOW.

“I wish I’d done that,” the other girl said. “I don’t miss high school at all. But to answer your question, no, I just got into town last week.”

Elisa wasn’t entirely sure what to say to that. So she just went with, “Ah.”

Five minutes passed, and the professor still hadn’t shown. Some students seemed perfectly happy with this arrangement, continuing to talk or text, while others squirmed in their seats and glanced at their watches, asking the others if they’d possibly gotten the start time wrong.

Elisa cleared her throat and began to throw something out to the room: “Maybe we should call the registrar’s office or some—”

One of the jocks in the back row cut her off. “You know, there’s a rule that if the professor doesn’t show up after fifteen minutes, we can just leave.”

She bristled. There was no such rule. She had checked.

“But if the prof ever really is fifteen minutes late,” her father had said, “leave anyway. That’s what I always did, and I graduated with a 3.8.”

Before she could say anything, the girl who’d brought a book with her spoke. Her eyes didn’t leave the page.

“I don’t think that rule is official, and even if it was, it hasn’t even been fifteen minutes yet.” Man, her voice had a way of quieting a room. “And don’t interrupt people. It’s rude.”

The jock rolled his eyes and droned, “Thanks, Mom, I’ll keep that in mind,” which earned him a few laughs from the other students. Even so, Elisa noticed the red creeping up his cheeks, and she smiled.

“Thank you,” she whispered to the girl, who didn’t respond beyond a small nod.

Susan Mesler-Evans is a writer, college student, D&D enthusiast, theatre nerd, and horrific procrastinator. Born and raised in Columbus, Ohio, Susan now lives in Florida, and can often be found reading, scrolling through Tumblr until 2 AM, overanalyzing her favorite fictional characters and relationships, bingewatching comedies on Netflix, thinking about writing, and even, on occasion, actually writing. Most Ardently is her first full-length novel. You can find her at susanmeslerevanswrites.com.

Where Romance and Pop Culture Live Happily Ever After.
All Posts
PrevPreviousHow to End Your Series the Right Way by Marie Force
NextNew Adult Corner: Top Picks for October!Next