Exclusive: Excerpt of Only Mostly Devastated by Sophie Gonzales 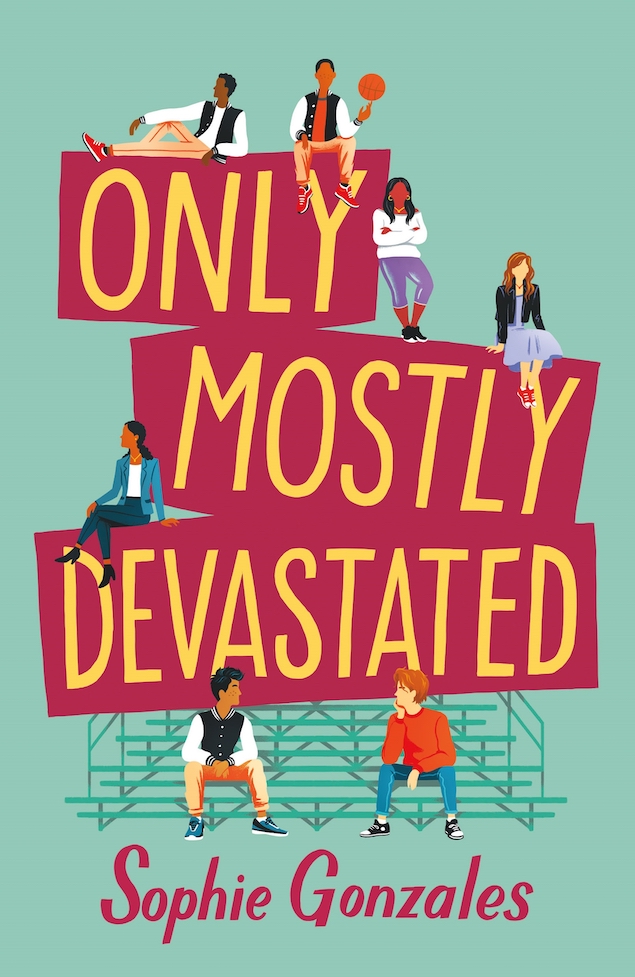 We are so excited to share with you an exclusive excerpt from Sophie Gonzales’ upcoming novel Only Mostly Devastated out March 3, 2020!

About Only Mostly Devastated:

Ollie and Will were meant to be a summer fling―casual, fun, and done. But when Ollie’s aunt’s health takes a turn for the worse and his family decides to stay in North Carolina to take care of her, Ollie lets himself hope this fling can grow to something more. Dreams that are crushed when he sees Will at a school party and finds that the sweet and affectionate (and comfortably queer) guy he knew from summer isn’t the same one attending Collinswood High.

Will is more than a little shocked to see Ollie the evening of that first day of school. While his summer was spent being very much himself, back at school he’s simply known as one of the varsity basketball guys. Now Will is faced with the biggest challenge of his life: follow his heart and risk his friendships, or stay firmly in the closet and lose what he loves most.

We squeezed through four or five groups, then I caught sight of Juliette’s hair through the crowd. Lara was next to her, talking to a group of guys in black-and-white letterman jackets standing in front of the wooden panel fence.

We stared at each other in dumb shock. It was hard to tell which of us was the deer, and which was the headlight.

He spoke first. Which was excellent, because I wasn’t sure if I should be thrilled or accusatory. “Holy shit, Ollie! What are you doing here?” He looked dumbfounded, but it was a happy kind of dumbfounded. That’s all it took for all my doubts to disappear. Of course he wasn’t ignoring me. This was Will we were talking about.

“What are you doing here?” I asked, before realizing that at least this was supposed to be his state. It was significantly weirder for me to be here than him. “You didn’t say you lived in Collinswood. You said it was something else, starting with M, right? Or L?”

“Napier. I live in Napier. It’s twenty minutes out of Collinswood,” Will said. “I go to school here. Ollie, why aren’t you in California? You’re so ridiculous!”

He was grinning. Beaming, really. A cheekbone-shattering kind of smile. A viral-epidemic kind of smile. Infectious-as-hell. All of the misery from the last couple of weeks, every bit of it, was gone. Like it’d never been there.

“My parents thought they’d move us over to help out with Aunt Linda. She lives here. In Collinswood.”

“You never mentioned that.”

“Oh my God, Ollie-oop, how awesome is that?” Lara cut in, her voice way too perky to be sincere. Will and I looked at her as one. I’d forgotten she was there until that moment. I’d forgotten anyone other than Will was there. “What are the odds? Will, Ollie was telling us all about his summer this morning.”

Will’s smile dropped, and so did my stomach. He wasn’t out to his parents. God only knew that meant he probably wasn’t out here, either. Or at least, he hadn’t been. Until I’d opened my mouth. I didn’t know these girls from Abraham Lincoln. For all I knew, they’d already made a group chat for half the grade about Will and me. Uh-oh.

One of the letterman guys sidled up beside Will. He was half a foot taller than Will, with deep brown skin and the kind of jawline people write Tumblr posts about. “By the way, Lara,” he said, apparently continuing a conversation that had been underway when I got here, “how come you didn’t sit with me in Biology? I saved you a seat and everything.”

Lara softened. So she could be sweet. “You did? I was so tired this morning, I sleepwalked into class.”

I tuned the conversation out and stole a glance at Will. His mouth hung slightly open, and his stare was fixed on a spot in the distance. “Will, seriously. I had no idea they’d know you. It didn’t even occur to me, I—”

Will’s face was still blank. “I was busy. Sorry. Anyway, good to see you. I’ll catch you around.”

And he turned his back on me to talk to someone else. Just like that. Something deep inside me snagged, like a loose thread catching. I stared at the back of his head with my mouth hanging open. He did not just do that. I was imagining this right now. I had to be.

Juliette and Niamh had watched the whole thing. Juliette twisted her mouth, shot Will’s back a dirty glare, then led me away by my elbow with Niamh, leaving Lara behind with Matt. “God, he can be a real dick,” Juliette said, as quietly as she could, given the music volume. “Ignore him, please. The basketball guys are all a little funny when they’re around each other.”

“A little funny,” I echoed. Every step we took away from them felt like that thread inside of me was unraveling more and more. Like my soul was unspooling.

Time to make an excuse to get out of here, now.

I think the girls might’ve been talking to me, but it was hard to say. The crowd was blurring, and everyone was moving in slow motion. A few people bumped into me as we moved through the living room, or maybe I bumped into them. Who knows if they apologized? Who even knows if I did?

Around the time we got to the refreshments table, I’d convinced myself this was a dream after all, and dug my fingernails hard into my palm to prove it. Unfortunately, the only thing it proved was that I was: a) awake, and b) still at the damn party. Abort mission. Now. Screw the repercussions.

“Come on, I’m sure it’s not that bad for you,” Juliette was saying to Niamh, holding out a ladle. “It’s just some punch.”

“I’m trying to cut down on carbs. Hence, vodka shots.”

“It’s got potatoes in it. What are potatoes made of? Carbs, Niamh.”

I cleared my throat, hovering like an awkward stalker behind them.

“Vodka doesn’t have potatoes in it,” Niamh shot back, “it—”

The only acknowledgment I got was a vague nod from both of them. Guess that was my pass. I broke off and wandered through the living room, pushing past body after body after unfamiliar body.

I had the desperate urge to go outside and call Ryan, or Hayley, or anyone, really. Just to hear a familiar voice. To drown out the fact that I’d screwed up my first day at school, and I’d outed Will, and that if he hadn’t wanted to shut me out after all, he definitely did now. And it was all my fault.

Out in the front yard, I sucked in a lungful of air and narrowly avoided passing out. That might sound melodramatic, but I hadn’t realized how stifling the smoke and body heat and beer fumes were until they contrasted with clean, crisp air. I trotted down the steps and followed the house around until I found a spot where I could slot myself between the shrubs and flower beds to lean against the cool brick wall. Suddenly, I didn’t even want to call Ryan. I had to get out of here. I sent Mom a quick S.O.S. text, and settled back against the wall to wait.

A familiar voice to my right made me start. Will. Of course it was. I couldn’t have five minutes’ reprieve from this absolute bad joke of a day, huh? He must be near the front door, from the sound of his voice. I couldn’t let him see me here alone. No way. If we were playing the “I don’t care about you” game, the best possible way for me to lose was to be caught friendless and feeling sorry for myself. I’d rather dive into the writhing sea of hormones back inside, thanks all the same.

His voice was getting closer. That left me with two options. One, find a way to climb inside the rosebush and pretend to be a rose. I’d been a bush in a school play once, and, not to brag, but I’d been told I was a natural at it, so option one was solid. Two, flee to the backyard.

I fled. I fled like a bigot dodging the concept of equality.

CREDIT: From Only Mostly Devastated by Sophie Gonzales. Copyright © 2020 by the author and reprinted by permission of St. Martin’s Publishing Group.  ​

SOPHIE GONZALES is a YA contemporary author. She graduated from the University of Adelaide and lives in Melbourne, Australia, where she currently works as a psychologist. When she isn’t writing, she can be found ice skating, performing in musical theatre, and practicing the piano. She is also the author of The Law of Inertia.

Where Romance and Pop Culture Live Happily Ever After.
All Posts
PrevPreviousHistorically Yours: Top Historical Romance Picks for August 12th to 25th
NextDaily Frolic: The Little Women Trailer is Here!Next