Exclusive: Excerpt of The Daddy Coach by Karen Muir 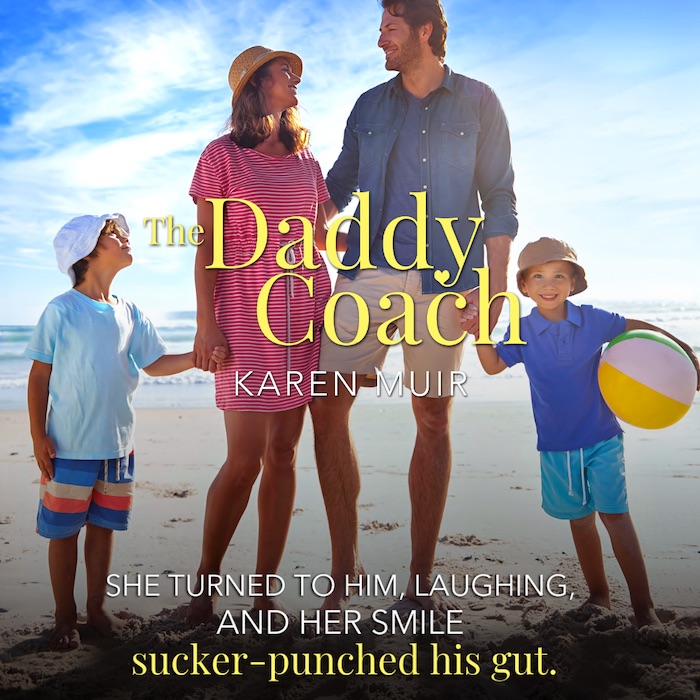 We are so excited to share with you an exclusive excerpt from Karen Muir’s new novel The Daddy Coach out now!

About The Daddy Coach:

Hoping to vindicate her brother, botanist Gina Dunn poses as a nanny to the man she believes framed him. Even though she grew up in a dysfunctional home, how hard can it be looking after twin four-year-old boys? If she can nurture rare orchids, surely she can handle this.

Instant fatherhood hits contractor Will Sinclair hard when his twin sons he didn’t know existed come to live with him. The rebellious boys reject Will as their real dad, forcing him to turn to Gina, his new nanny, for her “expert” help.

Interacting with Will and his boys as a “daddy” coach, Gina starts to crave the family she’s always longed to have. But Will’s reaction when he learns of her deception isn’t her biggest fear—one of two men she loves is lying… 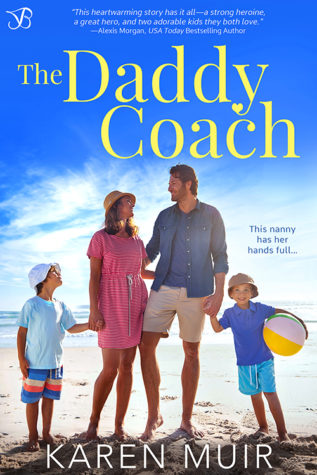 Now that Will had a girlfriend, staying for dinner had seemed all right. But Gina soon discovered its dangers. She sat at the kitchen table, while Ian and Harry prepped a dinner salad at the counter on stools. Will was making his first casserole.

Heat coursed through her at the thought of sharing Will’s bed. He glanced her way and stilled, as though he sensed her fantasies. Damn. I’m blushing again.

Harry started toward the table, carefully balancing a bowl of black olives. He set it down next to Gina and said, “Bree is really big in front.” He cupped both hands on his chest to demonstrate.

“Really.”  Just what she wanted to hear.

“Well….”  She shot Will an anxious glance. Knife in hand, he pointed toward her, as if to say, ‘Go for it’.

Turning back to Harry, she cleared her throat. “Those are called ‘breasts,’ Harry.”

“Why does she have them?” he asked.

“Does Bree have a baby?”

“I don’t know.” She frowned. Will should be having this conversation, not her. Attempting to draw him in, she called across the room. “Does Bree have a baby, Will?”

“No, she doesn’t.” He walked to the refrigerator and took out a carton of milk. She watched in open-mouthed disbelief as he poured a tall glass, lifted it high to salute her and then drank

Ian piped up. “Do you have breasts, Gina?

Groaning inwardly, she faced his wide-eyed curiosity. As a scientist, she believed in giving children the facts about sex when they asked. In a matter of fact manner, with careful forethought. Harry and Ian had caught her by surprise, and their father–the milk-gulping clown– was no help. Even so, she gave the boys a basic explanation of babies and breasts.

She lost their rapt attention when helicopter rotors thumped overhead, and they dashed outside to catch a glimpse. Slumping with relief, she turned to Will, who leaned against the counter watching her. “Still thirsty?” she asked.

He smiled and set down his empty glass. “You looked so tense when they asked about Bree’s boobs–”

“Breasts, right. I thought a little humor might ease the situation.”

She shook her head. “I think you’re the one who’s uncomfortable with the subject.”

Laughing, he pushed off the counter. “No way.”

“No? Glad to hear it.” She stood and walked toward him. “Because their next question will probably be ‘where do babies come from?’ And you get to handle that one.”

He stiffened. “You’d do a much better job.”

“Oh no.” It was her turn to laugh. “You need the practice.”  Ignoring his startled expression, she picked up the milk carton and filled the glasses at the table.

“Got any books on the birds and the bees?”

“I’ll go online and find something,” she said.

“Thanks.” He rubbed his jaw, visibly shaken.

Where Romance and Pop Culture Live Happily Ever After.
All Posts
PrevPrevious4 Q&A’s From Your Favorite Y.A. Authors on The Epic Reads Tour
NextDaily Frolic: Cancel Your Plans, ELITE is BACK!Next