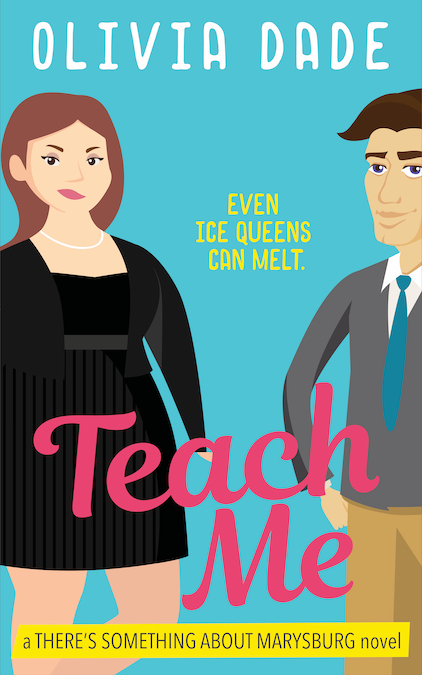 Note from Frolic: We are so excited to share just a little taste of Teach Me by Olivia Dade which comes out tomorrow. Trust us, you’ll want to one-click this one!

About Teach Me, out tomorrow!

Their lesson plans didn’t include love. But that’s about to change…

But keeping her distance from a man as warm and kind as Martin will prove challenging, even for a stubborn, guarded ice queen. Especially when she begins to see him for what he truly is: a man who’s never been taught his own value. Martin could use a good teacher — and luckily, Rose is the best.

Rose has her own lessons — about trust, about vulnerability, about her past—to learn. And over the course of a single school year, the two of them will find out just how hot it can get when an ice queen melts.

Rose gestured at the brochures in his daughter’s grasp. “You’re deciding on colleges?”

“Yup,” Bea shook the stack of papers. “I’ve split them into three piles: really expensive, prohibitively expensive, and I’d-better-see-about-cashing-in-Dad’s-life-insurance-policy expensive.” Her voice lowered to a faux-whisper. “I’m leaning toward the latter.”

At that, Rose actually snorted, and Martin would have hugged his daughter if he hadn’t known she’d shove him away and tell him he was being gross and mushy.

“We’re touring UVA this weekend.” Bea’s elbow jabbed his ribs, and he smothered a grunt. “I know he looks like he’s about to deliver a fatal prognosis most of the time, but Old Sobersides here is actually pretty fun on a road trip. We do taste tests of gas station snacks.”

At the mention of his ex’s other favorite nickname for him, he shifted his weight, and his daughter shot a glance in his direction.

He didn’t mind the sobriquet. Not usually. Not when it was said with such obvious affection.

But a part of him wished Bea hadn’t used it in front of Rose.

“Gas station snacks? Really?” Rose cast a skeptical—but not unfriendly—glance his way. “He doesn’t seem like someone who consumes a lot of Little Debbie Oatmeal Crème Pies.”

Bea grinned, her blue eyes bright. “Don’t let the lean frame fool you. He can pound the Ho Hos like nobody’s—”

Rose met his eyes, and for the first time, he saw warmth—at least a little of it—directed his way. “You’ve done well with this one, Krause.”

When he laughed, she stilled for a moment, her smile dying.

He didn’t understand what had happened. But he wanted that smile back, so he worked for it. “Funny. I was just thinking I should return her to the cabbage patch and tell them there’d been a clerical error.”

And there it was again. That incandescent curve of her lips. This time, because of something he’d said. Him, Old Sobersides with the Resting Proctologist Face.

Why that made his shoulders straighten a fraction, he couldn’t have explained. But it did, and the adjustment felt…different. Good different.

His daughter poked him again. “You’d miss me, and you know it.”

He would. He already did, every other week.

“Possibly. But your college fund would buy a lot of therapeutic Ho Hos.” With that, he aimed for the door. “Thank you for all your time and help, Ms. Owens. I feel much more prepared for the school year after having talked with you.”

“That was the intent.”

A cool dismissal. But when he glanced over his shoulder, she was studying him with his daughter, her brow creased in an expression he had no way of interpreting correctly.

Bea paused in the doorway and looked at Rose. “See you when school starts.”

Still and silent, she watched his daughter disappear into the hallway. The setting sun bathed her skin with rosy light, but that light wouldn’t last much longer. And if something about leaving his new colleague alone in the gathering shadows of her classroom tugged at his chest, he wasn’t paying the pull a bit of attention.

“Good night, Mr. Krause.” With Bea’s departure, Rose was opaque again. Still lovely, but a definite chill had descended. “See you in a week. Please close the door behind you when you leave.”

After one final, unhappy survey of the rapidly darkening, nearly empty parking lot outside her classroom windows, he did.

Leaving her classroom didn’t mean she left his thoughts, though.

He’d just met her that afternoon. Her opinion of him shouldn’t mean anything to him.

But it did. Somehow, it already did. 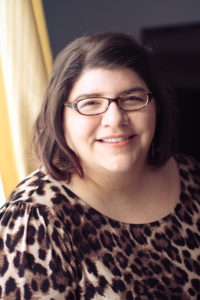 About Oliva Dade in Her Own Words

While I was growing up, my mother kept a stack of books hidden in her closet. She told me I couldn’t read them. So, naturally, whenever she left me alone for any length of time, I took them out and flipped through them. Those books raised quite a few questions in my prepubescent brain. Namely: 1) Why were there so many pirates? 2) Where did all the throbbing come from? 3) What was a “manhood”? 4) And why did the hero and heroine seem overcome by images of waves and fireworks every few pages, especially after an episode of mysterious throbbing in the hero’s manhood?

Thirty or so years later, I have a few answers. 1) Because my mom apparently fancied pirates at that time. Now she hoards romances involving cowboys and babies. If a book cover features a shirtless man in a Stetson cradling an infant, her ovaries basically explode and her credit card emerges. 2) His manhood. Also, her womanhood. 3) It’s his “hard length,” sometimes compared in terms of rigidity to iron. 4) Because explaining how an orgasm feels can prove difficult. Or maybe the couples all had sex on New Year’s Eve at Cancun.

During those thirty years, I accomplished a few things. I graduated from Wake Forest University and earned my M.A. in American History from the University of Wisconsin-Madison. I worked at a variety of jobs that required me to bury my bawdiness and potty mouth under a demure exterior: costumed interpreter at Colonial Williamsburg, high school teacher, and librarian. But I always, always read romances. Funny, filthy, sweet — it didn’t matter. I loved them all.

Now I’m writing my own romances with the encouragement of my husband and daughter. I have my own stack of books in my closet that I’d rather my daughter not read, at least not for a few years. I can swear whenever I want, except around said daughter. And I get to spend all day writing about love and iron-hard lengths.

So thank you, Mom, for perving so hard on pirates during my childhood. I owe you.

Where Romance and Pop Culture Live Happily Ever After.
All Posts
PrevPreviousWedding Traditions Worth Breaking by Cindi Madsen
NextContemporarily Ever After: Top Picks for the Week of May 26thNext