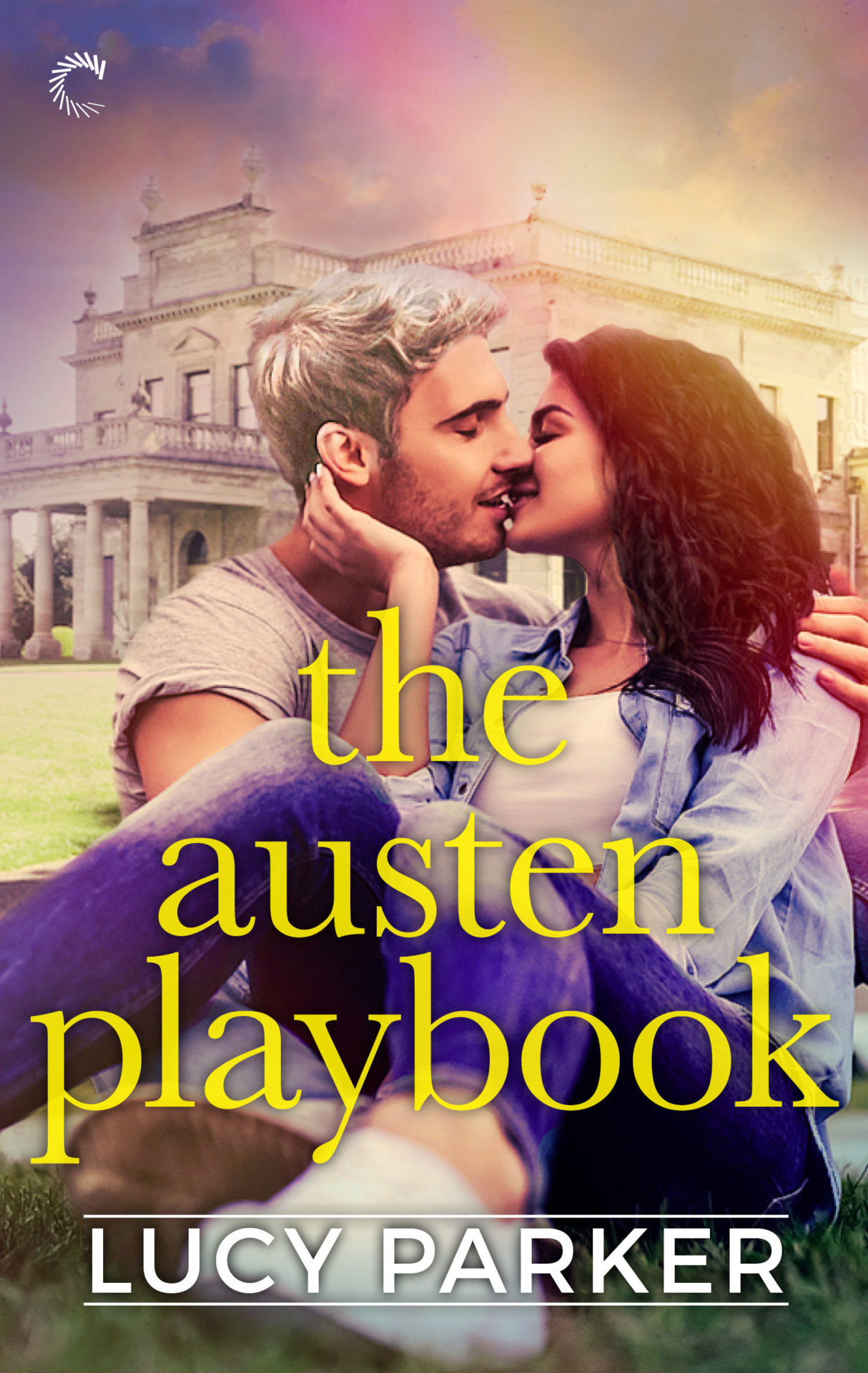 [Note from Frolic: We are so excited to bring you an exclusive excerpt from The Austen Playbook by Lucy Parker, coming out April 30th. We are going to let Lucy herself tell you more about this incredible book]

The Austen Playbook is the fourth book in my London Celebrities series, and although it’s very much a stand-alone story, it also acts as a companion novel to the second book in the series, Pretty Face, in which Freddy Carlton, the heroine of The Austen Playbook, made her first appearance. When I wrote Pretty Face, I didn’t initially intend for Freddy to go on to become a main character herself, but she proved to be so much fun to write, such an irreverent, joyful personality, that I wanted her to have her own much deserved happy ending, and I hope that the people who were drawn to her in Pretty Face will enjoy seeing her take center stage here.

In Pretty Face, Freddy was the young veteran of the West End, the actor who’d been a star of the stage since childhood. She was happy-go-lucky, blithe and breezy, and a source of cheerful advice and support for that heroine. The Austen Playbook picks up a few years after the events of Pretty Face, when Freddy is at a crossroads in her life. Still a determined optimist, she looks for happiness in life, but her desire to also make the people she loves happy has often led her to follow their path instead of her own. Freddy is the youngest member of a theatre dynasty. Her family has been acting in the West End for hundreds of years, and her grandmother was widely considered one of the greatest playwrights and actors of the twentieth century.

Her father has raised her to follow in those iconic footsteps and take her place as one of the greats of serious drama — however, her own passion is for light-hearted rom-coms and musicals. After years of trying to be somebody that she’s not, her career as started suffering; she’s losing her spark on stage — and that fact hasn’t gone unnoticed by the most fearsome theatre critic in London, James “Griff” Ford-Griffin, whose reviews of late have frequently slammed her performances.

Cynical Griff has his own problems. His family’s country estate is headed for financial ruin, and his dreamy, irresponsible relatives are only making the situation worse. His one chance to save the property is the film he’s producing on Henrietta Carlton, Freddy’s grandmother. His grandfather had an affair with Henrietta decades earlier, and he had built a boutique theatre for her on the grounds of his estate. Griff needs peace and quiet to finish the final preparations to get the film green-lit, and he’s appalled to discover that his well-intentioned, feckless younger brother has signed a contract allowing a major theatre production to be staged in their backyard.

The stage version of The Austen Playbook, adapted from a viral video game, has characters from all of Jane Austen’s novels transplanted to a house party, in a murder mystery scenario, and will be broadcast live on television, with viewers at home voting to direct the outcome of each scene. Suddenly, every West End actor Griff has criticized in print is living in his house for the summer — including Freddy, who has been cast as Lydia Bennet.

Griff is an icy-tempered pessimist; Freddy is a sunny optimist. They have nothing in common, shouldn’t get along — and certainly shouldn’t fall in love. But as they’re forced into close proximity and find themselves caught up in the hidden secrets of the past, Freddy and Griff find that the path to true happiness can lead in an unexpected direction.

The sun was rising higher in the sky. It was going to be a beautiful day. The birdsong of the skylarks in the trees came from so many directions that it seemed to hang suspended in the air, like a lace of interwoven melody. It was difficult to maintain a bad mood in that setting.

Difficult, but he managed.

Aided when he turned the corner by the oldest tree on the property, an enormous, towering oak that his mother had, long ago, told him contained dozens of tiny rooms inhabited by gnomes and fairies. He’d heard her out, then offered a few short, pertinent facts on the concept of a tree trunk. Charlie had been born shortly afterwards, and she’d found a more receptive audience for her flights of imagination.

Over a quarter of a century later, the majestic old tree seemed to have picked up its first fairy, but there was nothing ethereal about her. More like a force of nature. She was sitting against the monstrous base of the tree, wearing a rainbow-striped T-shirt and incredibly short shorts, with that explosion of disorderly hair a tangle against the bark. She appeared to be trying to fix a broken lace in her left trainer.

“Oh.” Freddy looked up at him through the frenetic dark mop and shoved a handful of curls out of her face. “Good morning.”

“Good morning.” He took in the shoe problem, knelt at her side, and reached into his pocket.

“Dear me,” she said with suspicious blandness. “It’s not a Mr. Collins situation, is it? I really prefer to have my breakfast before I receive unsolicited proposals.”

He found one of the cable ties he’d been using to fix the broken wiring in the library this morning, inserted it through the top loops of her trainer and fastened it tightly, then glanced upwards. Her face was very close to his, and he looked straight into her sparkling eyes. There were faint dark smudges under them, but she exuded a warmth that he almost felt as a physical sensation, as if, without touching him, she was heating his own skin. That attitude of suppressed laughter was one he’d often found grating on stage, but out here in the sunshine, he felt that same sudden and strong tug of attraction he’d experienced in the library yesterday. It was like trying to bury something in the sand, only to have the wind persistently blow it back into his line of sight.

And he was still down on one knee, like he was serenading her in a fucking comic opera.

“I only propose to women I barely know on Saturdays.”

“Funnily enough,” she said, “I’m starting to feel like I’ve known you for ages. Power of the written word, I suppose. All these years of reviews, it’s a bit like having a one-sided correspondence with a really crabby, judgmental pen pal.”

Sticking with the theme of a one-sided conversation, he didn’t bother to respond to that. He stood, and after a hesitation, reached down a hand. She took it and he pulled her firmly to her feet, then tried to let go of her.

For a person with small fingers, she had a grip like a barracuda’s teeth. Freddy turned his reluctant hand over and frowned down at his knuckles. “What have you done to yourself?”

Scraped off about seven layers of skin, thanks to the endless cast of this travelling circus.

“A chance encounter with Elizabeth Bennet and a pair of pliers in the library.”

“Sounds like Act Two of the play. Murder most foul under the card catalogue.” Freddy was rubbing the sides of his fingers with the tips of hers. Her thoughtful face suggested she had no idea she was doing it. He looked down at where their skin touched. “You don’t mean Maya Dutta went for you with a blunt instrument? She’s much too nice.”

“It wasn’t blunt.” He gestured with his scraped-up, imprisoned hand, and she released it quickly, with a murmured apology. “Apparently she lost her way trying to find the kitchen before dawn, and slammed the library door into my chair while I was cutting a wire.”

“Well, I hope you didn’t grump at her. She’s a very sensitive person.” From distracted smartarse to coolly threatening Mother Hen in one second flat. He hadn’t given her enough credit in those reviews for her chameleon-like abilities.

“With no sense of direction.”

“You’re a little too fond of that expression. I believe you applied it to me, as well.” Freddy nodded at his hand. “Did you put antiseptic on it? The pliers could have been rusty. And you should keep it covered.”

“If you drop the Florence Nightingale act, I won’t make any further comments about the roles you choose.”

“You won’t be able to if you succumb to sepsis.” Freddy jogged a few steps, testing the makeshift fix on her shoe, then smiled at him. “Thanks. You’re my white knight today. I do love when the day throws up an unexpected surprise before I’ve even had my toast.”

They’d travelled at least a hundred metres before he fully realised that he’d ended up on a joint run with her.

“God, I hate running,” she said as they turned at the far-most field and headed back towards the house.

“Why do it then?” He swiped the back of his arm across his forehead. “You don’t seem the type to bother with anything you don’t enjoy.”

Freddy cut him a glance. “Other than in my career choices, you mean?” Her breaths were coming fast and broken. “It’s quick, cheap exercise, and I have to maintain a base level of fitness for the job. If it eventually gives me a bubble butt, bonus.”

He managed to keep his eyes on the road ahead. Focusing on the rhythm of his own breath. Steady in, deep out.

“I tried tennis for a while, but my aim was awful. Balls flying everywhere. Besides, it was right after the director at the Southeastern Playhouse told me I wasn’t thin enough to make it to the top tier, and my flatmate thought I was trying to lose weight to pacify him, so I had to stop the lessons on principle.”

Griff looked at her sharply. “Who was that? Tom Michaelis? I hope you told him where to go.”

“I finished out my contract like the professional I am and haven’t signed one with him since.” Freddy plaited her insane hair without slowing her pace. “It’s all part and parcel of the industry. You don’t get the perks without the bullshit.”

“If I decide to take one idiot’s opinion to heart, I’m in the wrong business entirely.”

“Was that a dig at Michaelis or at me?”

“It does work on multiple levels, doesn’t it?” 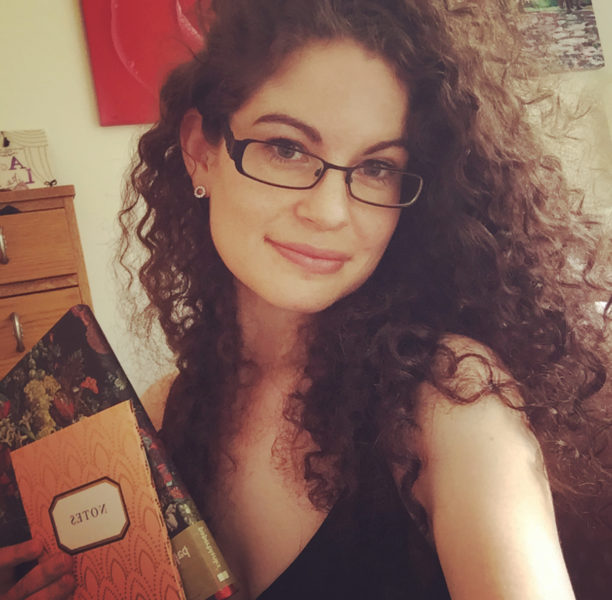 Lucy Parker is a contemporary romance writer and an all-romance reader, who lives in the South Island of New Zealand. From a very early age, she looked for romantic sub-plots in fiction — and would happily ship characters anyway if there wasn’t one! In her early teens, the 1995 Pride and Prejudice miniseries led her to seek out the book, and then a family friend introduced her to Georgette Heyer, and a lifelong devotion to romance novels began. Her favorite genres are contemporary, historical and paranormal romance, and she also loves classic detective fiction and cozy mysteries.

Where Romance and Pop Culture Live Happily Ever After.
All Posts
PrevPreviousThe Girls You Love to Hate: Our Favorite “Mean Girls” by Austin Siegemund-Broka & Emily Wibberley
NextBang of Thrones: Winterfell? More like WinterFEELNext