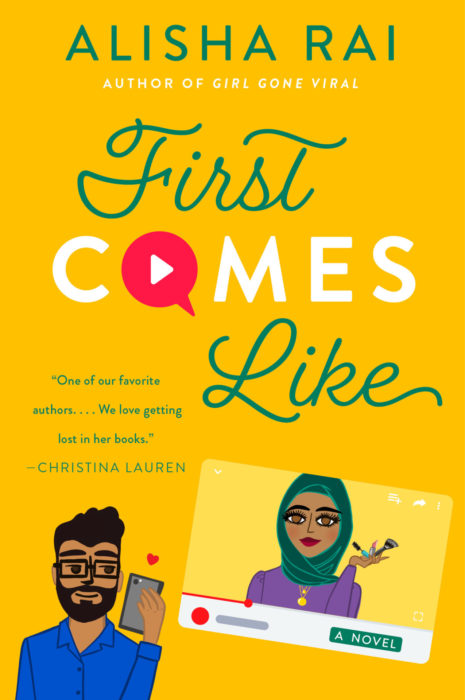 We are so excited to bring you this excerpt of First Comes Like by Alisha Rai! First, a note from Alisha.

“I wrote First Comes Like during a globally difficult snapshot of time, one filled with loss and isolation and stress for me and everyone I know.

I have always been an optimistic person, and I write optimistic books, but finding optimism during such a massive crisis is a challenge even for us professional romantics.

In order to keep going, I sought out every tiny pocket of happiness I could find. Sometimes that meant marveling at how technology could keep my far-flung friends and family connected. Sometimes it meant driving out to an almost deserted ghost town so I could gaze at art crafted by long-gone artists. Sometimes it just meant
cheering when a plant I thought I killed sprouted a tiny new leaf.

But many times, most times, it meant sitting on my couch with a good book written by a favorite author.

I hope this book and the “Modern Love” series is a pocket of happiness for you, whether you’re reading it on release day, or having it scanned into your brain via a chip in a hundred years. Thank you for taking this road trip with me.” 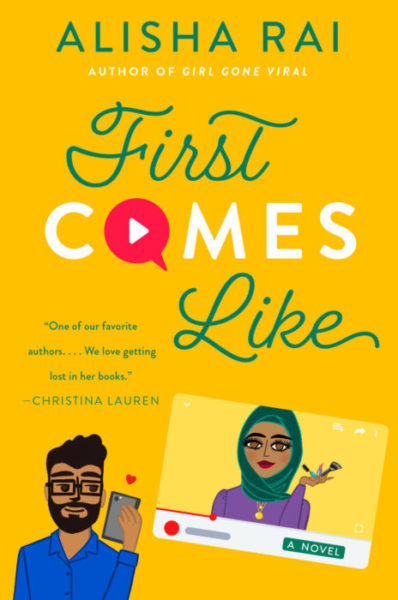 Beauty expert and influencer Jia Ahmed has her eye on the prize: conquering the internet today, the entire makeup industry tomorrow, and finally, finally proving herself to her big opinionated family. She has little time for love, and even less time for the men in her private messages—until the day a certain international superstar slides into her DMs, and she falls hard and fast.

There’s just one wrinkle: he has no idea who she is.

The son of a powerful Bollywood family, soap opera star Dev Dixit is used to drama, but a strange woman who accuses him of wooing her online, well, that’s a new one. As much as he’d like to focus on his Hollywood fresh start, he can’t get Jia out of his head. Especially once he starts to suspect who might have used his famous name to catfish her…

When paparazzi blast their private business into the public eye, Dev is happy to engage in some friendly fake dating to calm the gossips and to dazzle her family. But as the whole world swoons over their relationship, Jia can’t help but wonder: Can an online romance-turned-offline-fauxmance ever become love in real life?

A single spotlight falls on the hero, and the rest of the crowd ceases to exists.

Tall and dark and handsome, he wore a black suit with a stark white shirt and a skinny blue tie. No contouring needed for his face. It was too sharp and angular to be conventionally handsome like the rest of the famous men in his family, but the others could keep their handsome. Stern had its own thing going for it.

His lean lanky body wore that designer suit with casual elegance, like he’d been born to couture, which he had, as the eldest Dixit grandson.

He’s far too sophisticated for little old you.

No, he wasn’t. He was older than her, yes, thirty-two to her twenty-nine. She didn’t have much experience with men, between school and med school and quitting med school and her internet side hustle becoming her main hustle. In her sleuthing, though, she’d discovered little in the way of an excessive or extravagant life for him.

All she wanted to do was gallop toward him eagerly, but she settled on a sedate walk. When she was a couple of feet away, Dev turned his head. Their eyes met, and Jia swallowed the lump of excitement in her throat. “Hello.” Her voice was breathier than she’d ever heard it. Almost sexy. Not her usual vibe.

Dev’s gaze dipped over her, and a flush worked its way to her cheeks. She could put to rest her worry about the physical attraction, on her end, at least.

Since she’d decided to crash this party, she’d played this scenario out in a dozen different ways. He’d be shocked, delighted, annoyed, angry, panicked.

Not one of those expressions was on his face right now. Which made sense! He was an actor and good at controlling his emotions. Of course he wasn’t going to rear back in surprise or wrap her up in an embrace here in public.

“Hello,” he said, his voice low, and that was all she needed to nearly swoon. He had such a clipped and sexy accent.

“Hi,” she nearly responded, then mentally kicked herself. She’d already said that.

He held out his hand, and she accepted it automatically. His skin was a darker brown than hers, and a scar ran across his thumb. She almost jumped from the spark that leapt between them as flesh met flesh.

The spark extinguished at the splash of cold reality, and her hand slipped from his. He wasn’t possibly going to . . . pretend he didn’t know her?

Lots of people don’t know you.

Her heart supplied excuse after excuse, even though her rapidly growing logic shot them all down. He’d offered her a casual handshake, then asked who she was. If it was an act, he was committed.

She had to know. “Are you serious?”

His hair brushed his high cheekbones. It was longish, carefully cut to frame his face. “I . . . yes. I’m sorry. Have we met?”

She breathed deep, her brain racing. “You—We’ve been conversing.”

“I converse with any number of people, I’m afraid.” His smile was painfully polite, showed no teeth. “Apologies. Could I trouble you to give me a reminder?”

What on earth? He’d done this to multiple women? Found them on the internet, sent them messages? Wormed his way into their hearts? Why? Why do that?

“You’re really saying you don’t know who I am?” Her voice was hoarse.

His smile faded, and wariness replaced the charm in his eyes. He placed his glass of wine on the high-top table between them. “Uh. No. I don’t think I do.”

The cold ball of anger and panic that shot into her belly was welcome. It was a sharp distraction from the crack of her heart. After he’d written her long blocks of texts about how much he liked and admired her? He was going to do this? She took a step closer, and then another one, until they were only a few inches apart. She’d ignore his tall body and how much bigger he was to focus on this hurdle. “Where’s your phone?”

His thick eyebrows rocked up. “I beg your pardon?”

“Give me your phone.”

Her hands curled into fists. If her mom or sisters had been here, they would have seen the warning signs of her surge of emotions and immediately removed her from the situation, lest her impulsiveness take over her common sense. “I can’t believe this,” she whispered and was horrified at the pinprick of tears at the corner of her eyes.

Not as horrified as he was, though. He swayed forward, brow creased. “Are you okay?”

No, she was not. The kind, occasionally cheesy man who had talked to her during a lonely and vulnerable time in her life was now telling her he had no idea who she was.

“I’m fine.” She had to leave. She pivoted on her heel—why had she wasted heels on this man!—but he stopped her.

“Wait, miss—” He placed his hand on her shoulder, and she was too upset to appreciate this featherlight touch from one of the most famous faces on a subcontinent. She shrugged it off with a sharp jerk and was hauled to a stop by a ripping sound and a tug on her neck.

She turned around, her face burning as he raised his arm, his smart watch band caught on the gauzy fabric of her shawl. She instantly took a step back as he took a step closer. “I’m sorry. I don’t mean to . . . It’ll rip. Let me . . .” He took another step, and she inhaled.

That was a mistake. He smelled exactly how she’d thought he might, clean and fresh. His head lowered as he focused. He had incredibly long lashes. “Almost got it.”

“Rip it.” Before I start counting your lashes. Or ripping them out.

She was feeling a lot of feelings right now, darn it.

“It’s a beautiful fabric. I’d rather not.”

It was a beautiful piece, one her grandma had brought her from Pakistan, but she didn’t care. Humiliation and rejection burned her face. She couldn’t resist her heartbreak coming out in her next words, though she hated herself for it. “You told me you’d searched the universe for a woman like me,” she said, her voice breaking. “Why are you pretending you don’t know me?”

Dev stiffened, but the pocket of silence around them snapped Jia from her turmoil faster than a siren could. She glanced around and found that the people at the bar were watching them, eyebrows raised. A circle of people observe the heroine’s embarrassment while the band plays on.

The small circle of guests watching included the redheaded reporter—and the phone the woman held in her hands. Oh no. Jia shook her head, the sting of tears frightening her. She hadn’t cried in years, and she definitely didn’t cry in public. It would ruin her makeup and was extremely off-brand. “Are you done yet?”

He raised his wrist, free of her. “Yes.”

Alisha Rai pens award-winning contemporary romances and her novels have been named Best Books of the Year by Washington Post, NPR, Amazon, Entertainment Weekly, Kirkus, and Cosmopolitan Magazine. When she’s not writing, Alisha is traveling or tweeting. To find out more about her books or to sign up for her newsletter, visit www.alisharai.com.