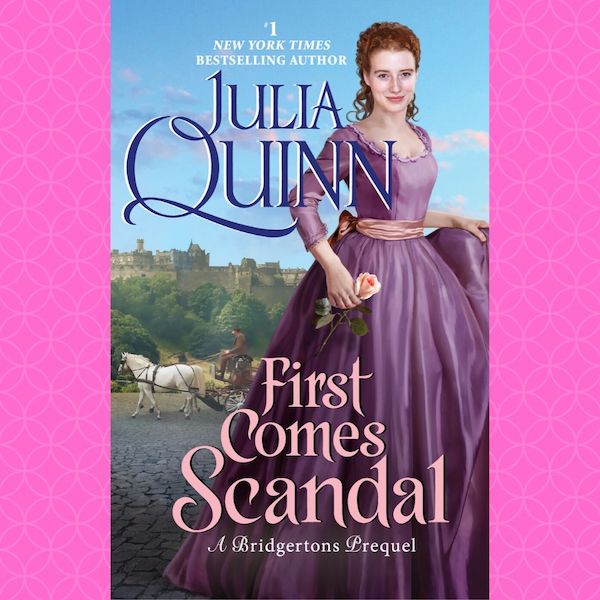 We are so excited to bring you an exclusive excerpt of First Comes Scandal by the inimitable Julia Quinn. It is the fourth book in her popular Rokesby series.

As fans of JQ know, in 2020, Netflix will premiere Bridgerton based on her popular series of novels about the Bridgerton family. Filming has officially wrapped on season one now and is in the post-production phase. The release date is still under wraps.

So while you wait for Bridgerton, how about a JQ novel to keep you company? First Comes Scandal releases on April 21.

She was given two choices…

Georgiana Bridgerton isn’t against the idea of marriage. She’d just thought she’d have some say in the matter. But with her reputation hanging by a thread after she’s abducted for her dowry, Georgie is given two options: live out her life as a spinster or marry the rogue who has ruined her life

As the fourth son of an earl, Nicholas Rokesby is prepared to chart his own course. He has a life in Edinburgh, where he’s close to completing his medical studies, and he has no time — or interest — in finding a wife. But when he discovers that Georgie Bridgerton — his literal girl-next-door — is facing ruin, he knows what he must do.

A Marriage of Convenience

It might not have been the most romantic of proposals, but Nicholas never thought she’d say no. Georgie doesn’t want to be anyone’s sacrifice, and besides, they could never think of each other as anything more than childhood friends… or could they?

But as they embark upon their unorthodox courtship, they discover a new twist to the age-old rhyme. First comes scandal, then comes marriage. But after that comes love…

They sat in companionable silence, taking turns breaking off chunks of cheese. “I have bread, too,” Georgie told him. She peered into the hamper. “And jam.”

She gave him a look, then sputtered with laughter. “What does that mean?”

He grinned again, rather enjoying the feel of it on his face. “I have no idea.”

He was comfortable with her. He could make the sort of stupid comments that were only a little bit funny and made no sense. The kind one made when one didn’t have to weigh every word and worry about judgment or scorn.

That’s how it had always been with Georgie — well, except for the night before. And even that had turned out fine in the end.

There were worse fates than marrying one’s friend.

He propped himself into a more upright position, pushing slightly past her to peer into the hamper. “I’d love some jam. Whatever the flavor.”

She raised a brow. “Speak for yourself.”

“You eat jam straight from the jar?”

He gave her a sideways glance. “Raspberry or strawberry?”

She threw a chunk of cheese at him.

He laughed and popped it in his mouth. “Fine, yes, I admit it. I’ve eaten jam straight from the jar. But I used a spoon.”

“So proper, you are. Next you’ll be telling me you’ve never drunk whiskey straight from a bottle.”

“Oh, there’s no way,” she scoffed. “I’ve seen you and Edmund after a night out at the tavern.”

“Where we drank from mugs and glasses,” he said pointedly. “Gad, Georgie, do you know what an entire bottle of whiskey would do to a man?”

She shook her head. “I’ve never had whiskey.”

“How can that be?” he asked. It would be highly unusual for a well-bred lady such as Georgiana to drink whiskey on a regular basis, but surely somewhere along the way she’d had a sip.

Georgie started spreading jam on a slice of bread. “Well, I don’t live in Scotland, for one thing.”

“I suppose that would make it difficult. Your father doesn’t drink it?”

She shook her head. “Not that I’m aware.” Nicholas shrugged. Whiskey was so ubiquitous in Edinburgh he’d forgotten that people didn’t drink much of it in England, especially this far south.

Georgie handed him a slice of bread and got to work preparing one for herself. “Here you go.”

They both looked up. Anthony was sidling over, one hand behind his back.

“I adore them!” She looked over at Nicholas. “I hate them.” And then back at the boys: “The more the better!”

Anthony conferred with his younger brother.

They both looked disappointed.

“At least cleverer than a seven-year-old.”

They watched as the two boys surreptitiously dropped a few worms on the ground. “Lofty goals,” Nicholas murmured.

She munched her bread and jam. “You do know how to flatter a lady.”

“Right,” he said, clearing his throat. It seemed as good an opening as any. “Speaking of which…”

She gave him an amused glance. “Speaking of flattering me?”

“No.” Good God. This was not going well, and he hadn’t even started.

Her eyes turned to mischief. “So you don’t want to flatter me.”

“My apologies. I couldn’t resist.” She set her bread carefully down on a napkin. “What was it you needed?”

What was it he needed? He needed to go back to Edinburgh and resume his life. But instead he was here, about to propose a marriage of — he assumed — convenience.

Not hers, either. Not really. Nothing about her life had been convenient lately.

“Sorry,” he muttered. “I wanted to talk to you, actually. It’s why I came out here this morning.”

“Not for the worms?” she asked cheekily.

This, more than anything, cemented his belief that she had no idea what was afoot. He cleared his throat.

She picked up a flask he had not noticed.

“Would you like some tea? It’s cold by now, but it will take care of your throat.”

She shrugged and took a sip. “I swear by it.”

“Right. Georgie. I really do need to ask you something.”

She blinked, regarding him with an expectant expression.

“When I came down from Edinburgh it was, as I told you, because my father wished to consult with me about something. But—”

“Oh, sorry, hold on one moment,” she said before turning toward the lake and yelling, “Anthony, stop that this minute!”

Anthony, who was sitting rather cheerfully on his brother’s head, said, “Do I have to?”

“Yes!” Georgie looked for a moment as if she might get up to enforce her will, but Anthony finally rolled off his brother and went back to poking holes in the dirt with a stick.

Georgie rolled her eyes before returning her attention to Nicholas. “Sorry. You were saying…”

“I have no bloody idea,” he muttered.

Her expression was somewhere between perplexed and amused.

But he didn’t say it.

In the end, he blurted it out, just like he’d told himself not to do.

“Will you marry me?” 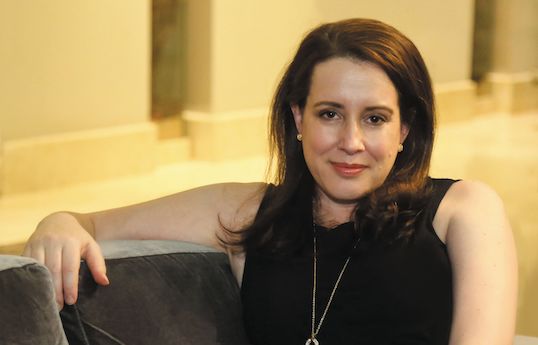 #1 New York Times bestselling author Julia Quinn loves to dispel the myth that smart women don’t read (or write) romance, and in 2001, she did so in grand fashion, appearing on the game show The Weakest Link and walking away with the $79,000 jackpot. She displayed a decided lack of knowledge about baseball, country music, and plush toys, but she is proud to say that she aced all things British and literary, answered all of her history and geography questions correctly, and knew that there was a Da Vinci long before there was a code. Ms. Quinn is one of only sixteen members of Romance Writers of America‘s Hall of Fame and her books have been translated into 29 languages. She currently lives with her family in the Pacific Northwest.

Where to Find Her:

Keira Soleore writes for the International Examiner and Cogitations & Meditations. She enjoys connecting with readers on Twitter (@keirasoleore) and through her website (www.keirasoleore.com). Her interests include medieval manuscripts, philosophy, poetry, picture books, choir, sunshine and beaches. Keira is a pseudonym.
All Posts
PrevPreviousNonfiction Books for When Fiction Stops Working
NextTrope Rec Tuesday: A Love Out of this World… And Beyond?Next