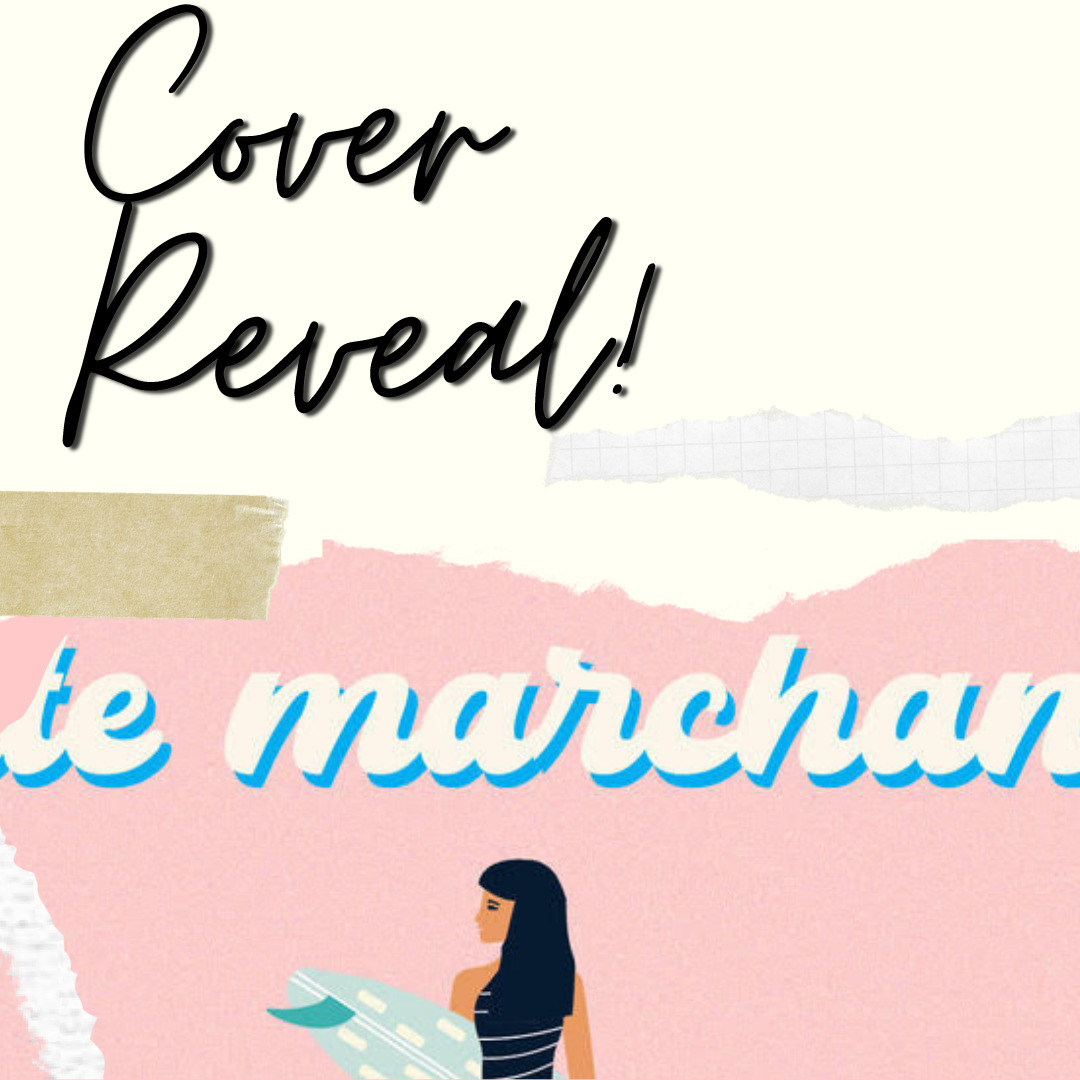 We’re so excited to bring you the exclusive cover reveal for Float by Kate Marchant! First, a chat with Kate herself.

Aurora: What was your inspiration behind this novel?

Kate Marchant: I started writing Float when I was fifteen, terribly anxious, and obsessed with the escapist idea of getting to start over fresh in a town where no one knows you. Preferably a town with a beach and a brooding boy next door who just so happens to be a lifeguard—which is convenient, because you just so happen not to know how to swim (my fifteen-year-old self really lived for this trope). In the process of writing and posting the story on Wattpad over the course of several years, I ended up cataloguing my own journey of self-discovery and learning to appreciate your strengths and forgive your weaknesses.

Describe the cover and how it relates to the story.

This is the kind of cover you pack in your bag for the beach—or pick up on a gloomy winter’s afternoon because you’re feeling nostalgic for the smell of tanning lotion and the feel of sand between your toes! It’s bright, summery, and unabashedly fun.

What’s up next for you in the bookish world?

My next book, Whistleblower, is about a college journalism major uncovers a scandal involving the head coach of her school’s football team. As her articles attract national attention and the evidence snowballs into something much worse, she realizes she’ll need the quarterback’s help to unmask his beloved coach and seek justice for the victims.

I’m really excited for readers to get their hands on this one in 2023! It’s loosely inspired by my four years at the University of Southern California and has enemies-to-lovers romance, plenty of college debauchery, discussions about privilege and toxic masculinity, and some wish-fulfillment for those who loathe wealthy white men who think they’re untouchable.

Seventeen-year-old Waverly Lyons is from Alaska. She doesn’t do sun. But after her divorced parents can’t agree on who gets to have her for the summer, Waverly gets shipped off to Holden, Florida, to spend a couple months with her aunt, Rachel. There’s one minor hiccup: Blake Hamilton, Rachel’s seventeen-year-old neighbor. He’s athletic, outgoing, arrogant, tan, and pretty much Waverly’s exact opposite. She’s eager to avoid him at all costs, hoping to fit in with the other kids in Holden without drawing too much attention to herself. But when Blake discovers that Waverly has been hiding the rather embarrassing secret that she can’t swim, he does the unthinkable: He offers to teach her.

If I didn’t find some air conditioning soon I was going pass out and end up sprawled across the concrete pickup platform outside Jacksonville International Airport, where eventually some poor security officer might stumble upon my unconscious body and have the unfortunate duty of reviving me.

I knew I was overthinking it—my mom always said my best talent was working myself up over nothing—but I was the only person who’d been stupid enough to step out of the cool airport terminal and head to the parking lot, where temperatures had to be in the hundreds. And I was way too stubborn to turn around and admit my mistake, so instead I stood in the narrow shadow of a lamppost and squinted along the heat-baked road for any sign of my aunt, Rachel, feeling like an idiot. A damp, sticky idiot.

Would I ever stop sweating?

Jeans really hadn’t been the right move. When I’d boarded my flight back in Alaska, I’d tried to wear clothes that were understated and aggressively normal—which was probably my first mistake. My family was hardly normal. Jeffery Lyons and Lauren Fitzgerald, both professors of environmental science at the University of Alaska, were well known in Fairbanks for their opposing stances on climate change, their torrid affair (the product of which was numerous inconclusive research papers and, tragically, me) and their cataclysmic divorce. Every summer since I’d turned eight they’d taken turns dragging me along on expeditions up to the Arctic. If my time-zone math was right, both of my parents should’ve been arriving at the research station right about now, unpacking their equipment and counting out rations for the long month ahead.

Normal wasn’t exactly in my repertoire.

But I had dressed like someone from Fairbanks, land of the aurora borealis and the midnight sun, would. This meant at least three layers and, for good measure, a lightweight raincoat.

I hadn’t realized anything was wrong with my choice of outfit until noticing I was the only one on the flight who wasn’t dressed like they belonged on a promotional pamphlet for a tropical resort. While I’d managed to strip off most of my upper layers in the cramped airplane bathroom, leaving just a spaghetti-strap tank top, I didn’t exactly feel like peeling off my jeans and parading around in my underpants. Airport security wouldn’t have appreciated that. Three separate guards had already given me the stink eye when they’d heard the stuttering wheels of my suitcase screech against the terminal’s linoleum floor.

Turns out, lugging one tiny roller bag back and forth between my mom’s place and my dad’s place for nine years really wears down the wheels. Go figure.

I’d started to really hate that abomination of a suitcase. It was small, black, and had given me absolute hell to find at the baggage claim. Maybe I could paint it. Something neon, or striped, or animal print. Anything to help me find it when I returned to Alaska at the end of the summer.

Aunt Rachel probably had some art supplies to spare. She was a freelance painter and graphic designer. My dad, who cared too much about equations and predictability to be anything other than a researcher, had never wanted to accept the fact that his younger sister was a creative spirit. She moved from state to state whenever she felt like a change of scenery. She’d ended up in Florida when she’d dated an amusement park engineer. He’d dumped her while at Disney World, of all places, and she’d settled down in Holden to collect herself.

After staring down at my crummy little suitcase for a minute or two, trying to decide whether to go for stripes or polka dots, I looked up and was practically blinded by the sight of the neon-green Volkswagen Beetle barreling toward me.

My hand flew up to shield my eyes from the reflection of the sunlight off the car’s exterior. The Beetle, once I thought about it, would make a pretty good model for my suitcase renovations. How could you possibly miss something that color?

The car drew closer and slowed to a slightly more legal speed. The front tire rolled up onto the curb at my feet, and the car finally came to a stop.

A woman smiled sheepishly at me through the open passenger’s side window. I only had to take one look at her to know who it was—the tangled brown hair and scattered freckles were familiar from all the family pictures dad had strung up on the walls of his apartment.

“You might’ve tapped it.”

Rachel looked up from the evidence of her horrible parking job and gave me a once-over. I figured I’d probably changed a lot since she’d last seen me. I was taller now, obviously, and I’d like to think I’d started to look less like a splotchy-faced, braces-clad adolescent and more like a worldly young woman with an expansive knowledge of curse words.

Rachel seemed to agree, because she nodded and said, “Well, then, shit.”

By the time I managed to pop out the retractable handle on my rickety little suitcase, my aunt had jumped out of the driver’s seat of the car and wrapped her freckled arms around me in a hug so tight it made me wheeze.

“Oh, Waverly, you’re so tall!” she cried, holding me at arm’s length to look me up and down. “The last time I saw you, I don’t think you were over four feet. Look at you! You’re like—like a real person. Practically an adult.”

Practically felt like the key word. Rachel and I were both on the taller end of the female spectrum, but she was in her thirties and had learned how to carry herself. I was still recovering from my freshman growth spurt. You’d think by the summer after my junior year I’d have gotten used to being nearly six foot, but the bruises that dotted my shins could attest to the fact that I hadn’t quite figured out what to do with so much body.

But I’d take her assessment as a compliment.

“Well, my darling little polar bear, let’s get you in some air conditioning,” Rachel said, grabbing the handle of my suitcase before I could tell her that my arms were working just fine. “I want to get you settled in before dinner. I’d like to take you out to my favorite place, if you’re up for some seafood.”

The thought of going out to a restaurant in this heat, after being wedged in a tiny airplane seat for the last twelve hours and surrounded by people, sounded like inhumane torture. But this was no time for cowardice. Back in Alaska, I was Waverly Lyons, the aggressively untalented and anxious offspring of two brilliant, bickering minds. The quiet kid with no best friend, only a small collection of people she traded notes with. The dead weight. The kid whose parents had finally cracked and called up a distant relative to play babysitter.

But for the next twenty-eight days, I was four thousand miles from that girl.

I could be anybody.

So as Rachel and I rolled back over the curb and pulled away from the platform to begin the hour-long drive south to my home for the month, I tried to do what I’d never managed to do before: not overthink it.

Aurora Dominguez is a high school English teacher, college professor and journalist in South Florida. Her work has appeared in The Miami Herald, Where Magazine and J-14 Magazine, all places where she worked as a writer and editor before going from the newsroom to the classroom. Her favorite days are "Caturdays," which she spends with a good book, her husband, Sebastian, and her cat, Luna. Her motto when it comes to reading: "No book left behind!"
All Posts
PrevPreviousYour Summer Bucket List: Sweet Summer Romances
NextWeekend Podcast Guide: Game Time!Next