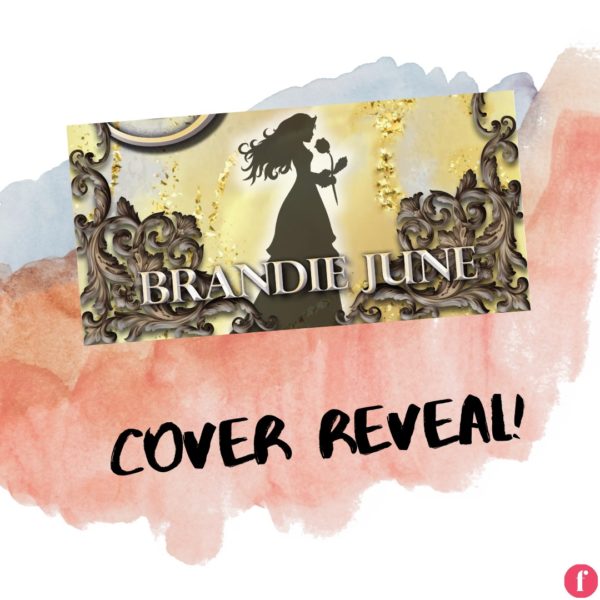 We are so excited to bring you this exclusive first look at Gold Spun by Brandie June!

If Nor can’t spin gold, she can always spin lies.

When seventeen-year-old Nor rescues a captured faerie in the woods, he gifts her with a magical golden thread she can use to summon him for a favor. Instead, Nor uses it for a con—to convince villagers to buy straw that can be transformed into gold. Her trick works a little too well, attracting the suspicion of Prince Casper, who hates nobody more than a liar. Intent on punishing Nor, he demands that she spin a room of straw into gold and as her reward, he will marry her. Should she refuse or fail, the consequences will be dire.

Desperate for help, Nor summons the faerie’s aid, launching a complicated dance as Nor tries to figure out not only who to give her heart but also who she herself wishes to become.

By Chace’s den, we are so screwed, I thought, stomping off the Stigenne Road and onto a lesser known path in the Biawood Forest. I had been so sure of the day’s success, certain we could sell our cure-all tonic within the day and have enough coin to feed us for weeks.

Admittedly it was only a simple mixture of water, cinnamon, and molasses, but it transformed into a miracle elixir by the time I was done selling it. We had spent the last of our meager coins on those blasted green glass bottles.

I cringed as I thought about how I would break the news to my brothers. When my brother Jacobie, only eight years old, had asked where I was going this morning, I’d gleefully told him I was off to scout the Spring Faire in Sterling and find us the perfect spot, promising to be back before midday. The sky was still inky with cold, bright stars, and my breath plumed around me as I instructed him to go back to sleep. As I left our tiny encampment, really only a rickety wagon, a crippled old donkey and the four of us in our thin bedrolls, Jacobie turned over, his soft snores soon joining those of our brothers Devon and Finn.

Only, once I reached the town square, I found another family selling miracle tonic. They even demonstrated its efficacy by curing a cripple boy’s limp. I was certain the boy was their son and had no such limp. We had planned to perform the same trick with my brother Finn.

A city might be interested in one cure-all tonic merchant, but they became immediately suspicious when two set up. One time we had tried to sell our ‘miracle’ elixir in the same market as another party selling an almost identical bottle. People demanded a test to show which elixir was real and who was selling them snake oil. Neither tonic cured the sick villagers, and we were run out. My brothers and I barely made it out of that town, and to this day we avoided that village.

I kicked at the nearest tree in frustration. The thick birch trunk didn’t care, but a sharp pain shooting up my foot had me unleashing an especially colorful string of curses as I hopped up and down in rage.

“Are you in distress?”

Whirling around, I started to see an elegant young man leading an equally fine horse. I silently scolded myself for crashing through the woods like a wild boar and thus not even hearing the approach of this stranger. I was a poor girl alone in the woods and well aware of what some men thought themselves entitled to. Still too far from camp to yell for my brothers, I took a quick step back, but my foot flared with pain, causing me to stumble and fall on my behind. The young man’s lip trembled, and I had the feeling he was holding back a smile.

“I’m fine,” I muttered, struggling to my feet.

“Here, allow me.” The young man advanced toward me, his hand outstretched. I was about to push his hand away when I saw the glitter of gold on his finger. I held out my hand, allowing him to pull me up as I gently slid his ring off, dropping it into my pocket before he noticed.

Standing, I bit back a cry from the dull pain that still radiated from my foot and appraised my rescuer. He did not look ready to pounce on me the way drunken tavern men tried, but he was also far too richly dressed to be a pilgrim or even a merchant come for the Spring Faire. And he was not hard on the eyes; with a strong jaw, and hair and eyes the color of obsidian. He was young, probably only a few years older than me, but held himself with the erect posture of the nobility. Of course, the costly blue velvet riding outfit also called out his wealth. The steed he led, a sleek midnight-black horse, was adorned with the finest saddle and bit I had ever seen.

My daft brain was shocked by in the incongruity of seeing a lone nobleman in the midst of the Biawood and I spoke before thinking. “What are you doing here?”

His eyebrows shot up. “Excuse me?” I couldn’t tell if he was amused or offended.

“I only meant that you’re clearly highborn, and we don’t see many nobles wandering the woods. Alone.” My surprise made me sound foolish, and I scolded myself. I needed to stop talking and get away from this nobleman before he realized he was one golden ring short.

He laughed, a warmth filling his dark eyes. “I imagine I am an odd sight in these woods,” he looked around at the surrounding trees, “but I seem to have lost my way. I was going for a ride, wishing to experience a bit more . . . freedom.”

Freedom to wander around the woods? I had to school my face from betraying the mockery I felt well up when I thought about how ridiculous the highborn behaved. All the money in the world, and they go and get lost in the Biawood. That’s not how I would enjoy such wealth. But instead, I smiled brightly, dipping into a deep curtsey to feign awe.

“Well, you are in luck, because I just came off the Stigenne Road. And you are not far off. You’ll be able to see the road just south of that cluster of elms.” I pointed him in the right direction, wanting to ensure his quick departure.

“Ah, wonderful, thank you.” And without another glance, the nobleman jumped onto his horse and set off towards the Stigenne Road. I watched till he was out of sight, a grin slowly spreading on my face as I pulled the ring from my pocket. It was heavy, possibly even pure gold. It was a signet ring, the flat surface engraved with three roses, thorns, and vine intertwined. I slipped the ring on my finger, happily thinking that the morning had not been a complete waste after all. Not wanting the nobleman to find me once he discovered my theft, I detoured deeper into the woods, much farther from the Stigenne Road.

Rumors told that the fay of Magnomel came into the Biawood this close to the border, but I decided baseless gossip was less dangerous than a wealthy man with a fast horse. My return trip to camp would be a longer but safer journey.

Halfway to camp, I heard the distant sound of running water. It had to be a stream. Feeling thirsty, I veered toward the sound for a victory drink. The stream was narrow enough to jump over, but still flowed briskly with freshly thawed snow. I knelt by the water, splashing my face and drinking deeply, the cold filling my stomach and radiating through my body.

“I still think we should kill it,” a voice said nearby. It was male, with an irritating whine.

“And miss our chance for the reward, I don’t think so.” This second voice was deep and harsh, like grit grinding.

“The Crown pays for live fay, not corpses, Acel. They says they can’t question a corpse.”

I stopped, stunned. Would the fay leave Magnomel and enter Reynallis?

Sterling had flyers posted with the gruesome image of the Fay Queen Marasina and claims that the fay drank human blood. I had been preoccupied in town, but now I wondered if there really were fay here in Reynallis. Leave, leave, leave, my commonsense shouted. But I just want to see it, my curiosity answered back.

Crouching low enough to the ground that I could smell the damp moss at my feet, I crept into some bushes and peered through. There was a small clearing in the woods where two men had set up camp. Their various supplies, sleeping rolls and a tiny cooking fire were off to one side. The whiny man, Acel, was tall and wiry with a rat-like face. His companion, Garin, was stout and as solid as a tree trunk. While Acel couldn’t stay still, almost hopping from foot to foot in anxiety, Garin stood his ground, firm in his footing and his argument.

I couldn’t see the fay, but when Acel gestured to a tree, I figured the faerie must be tied up there. It was just outside my range of sight, and I tiptoed around the clearing to get a better look. I was almost angled right to see the fay when I snapped a twig underfoot. I froze, fear of detection shooting up my spine.

“Did you hear that?” Acel hissed. 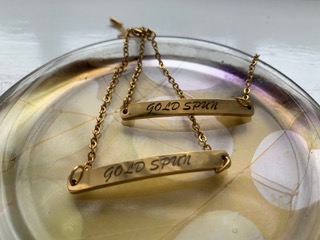 Click Here to enter to win one of these gorgeous Gold Spun inspired bracelets!

Brandie June spent most of her childhood onstage or reading, as both activities let her live in fantastic stories. She moved to Los Angeles to study acting at UCLA, and eventually branched out into costume design and playwrighting. While she spends most of her free time writing, she will still take any excuse to play dress-up, especially if it involves wearing a crown. She happily promotes more stories as a marketing director for kids’ films and anime. When not writing or marketing, she can often be found doing aerial arts, playing boardgames, drinking too much espresso, and coming up with new art projects. She lives with her husband, two spoiled rescue pups, a spoiled cat, six fish tanks, and five bookshelves. You can find out more about her at www.brandiejune.com and follow her @brandiejune.
As an Amazon Associate, we earn from qualifying purchases.
More
Share on facebook
Facebook
Share on twitter
Twitter
Share on pinterest
Pinterest
Share on reddit
Reddit
Share on email
Email

Where Romance and Pop Culture Live Happily Ever After.
All Posts
PrevPrevious2021 Book Recommendations from Some of Your Favorite Authors by Amanda Lara
NextFrolic Podcast of the Week: Dramas Over Flowers Podcast Shares 3 Korean Dramas That Are Perfect for Book LoversNext