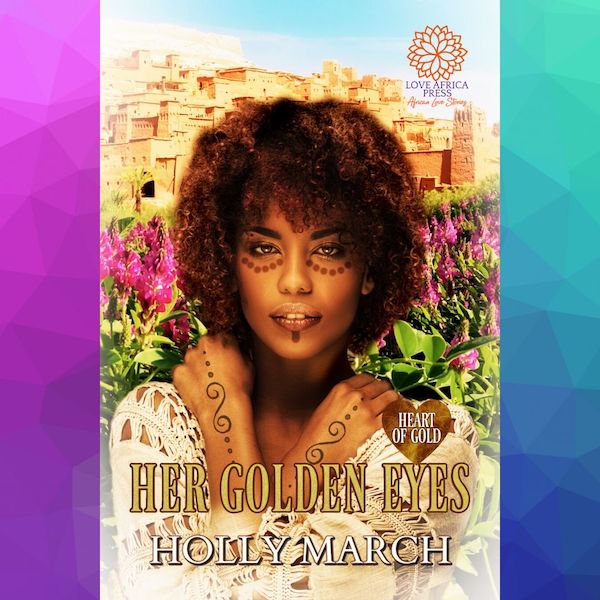 I have enjoyed the titles I have read from Love Africa Press, so when I heard about Holly March’s book, I jumped at the chance to showcase an excerpt for Frolic’s readers. Her Golden Eyes is the first book in March’s Heart of Gold series and is set in Morocco of the late 12th century. When you read the excerpt, you will understand my excitement about this book. -Keira

About Her Golden Eyes:

Sabbah’s neatly ordered life is about to be overturned. He is an important man in an important city who has been successful at everything so far, but can he succeed with love? He should be worrying about a conspiracy to undermine Marrakech itself, but his beautiful new housekeeper is disturbing his house, his head and his heart. Tison is in a new city, and she is determined to control her own destiny. That destiny was not supposed to involve falling for her new master or getting involved with a shadowy underground cell bent on anarchy.

“I am Sabbah ibn Abdella al Muhtasib. Remain in my household, and you must show respect.”

A few heartbeats pounded rapidly against his chest. He was nervous, not fearful, but strangely exhilarated. A confounding feeling. His shoulders ached with the desire to put his arms around her slight frame.

Her voice dripped reassurance. Shock at having his personal name used for the first time by someone not of his blood ripped through him all the same. It added to his desire somehow, that clear intimacy, but his surprise distracted from the physical contact that otherwise would have felled him by now.

“You may not call me …” he attempted, still battling against the swelling of emotion in his chest.

“Out there, or when others are here, you shall be–” she lowered her head, hushing her clear voice into a simulacrum of respect, “–al Muhtasib.”

Her hand lifted once more and squeezed his forearm, her touch cool and hot and not enough. “In your home, you are Sabbah. Come.”

She released him, and he almost staggered from the lack of those fingers.

“Your store will rot. You do not have enough servants or slaves,” she said, gesturing. “Your grains are wasting. You will need a cook. He or she will need an assistant.”

She marched past him, back towards the courtyard. He turned, blinking unsteadily as he followed her silent but determined steps. He did so blindly, blinking, thrown off his stride and not knowing at all how he had thought he could be master to such a wild creature. His peaceful home whistled away into the past, blown by a sandstorm of a woman. Would it be so bad to appease her? The thought of bending to her every whim sounded oddly attractive.

“You need a housekeeper. That will be me.” She waved a hand flourishingly over her head. “And Dour Kanto needs two under him. You will need three serving girls. At least five when you marry.”

Sabbah’s heart was pounding from the swing of her hips. He was deep in a fantasy of wrapping his hand around them. That was too much though. His mother had wanted him to marry. So far, all he had done was get a house big enough for a woman to have her own quarters. Guilt shot through the desire, old guilt, the oldest guilt in the world. Before men had found God, they had already been terrified of letting down their mothers.

“This courtyard needs trees, vines, flowers, herbs.” She pointed to the cooking spit, and his eyes followed her hand. “That should be producing food all day, soaps, too, and everything the house needs. And we need a place to give water to travelers or guests.”

She tutted at him, then started towards his quarters, the study, and receiving rooms on the ground floor, and he had a vision of her striding into his bedroom that brought his voice back to his throat.

Too loud, his words hammered against his own ears, echoing from the bare courtyard’s walls. His home was a quiet place. Kanto did what had to be done. They spoke over food, but no voices had been raised in this house.

His hand was on her shoulder. He had reached out to turn her. He could feel her bone, too close to the surface. She turned and was looking up at him with challenge in her eyes and a smile ghosting around her lips. Or did he imagine the challenge? Was it in his head, like the conviction that her lower lip needed to be touched by a gentle thumb?

Snatching his fingers from the threadbare gown she wore, he summoned his professionalism, girding himself in the armor of his title and his position in Marrakech’s society.

“You going to scold me, Sabbah?”

Raising a hand, she set it on his chest, warmth from her fingers seeping through his tunic.

She called him by his name, and she touched him.

“You are …” he paused. Could she stop his heart with the gentle pressure from her palm? Worse, could she feel the way it thumped? “Too much. Too fast. Things should remain …”

Except they should not. She was right. He had to have a household worthy of his position. He needed to find a wife.

“You are Muhtasib.” She was correct. “Your household should reflect that.” And again. “You need servants, slaves, and food, always ready to entertain. And you should marry while you still hold the position. You are handsome.”

The hand lifted, leaving its warmth behind, and she tilted his chin. His world shifted. He felt it. Felt the moment he went completely mad instead of slightly crazy for this hot-fingered woman with her bold words and slender body. His jaw felt molten. Almost bruised when her fingers left his skin. He could have groaned aloud and did not know quite how he stopped himself doing so.

Holly March has been telling stories all her life. She owes a great debt to the girls in the dorms, her RPG friends, and of course her family, who listened to her blather and read her fanfic. She lives on the Welsh border and breathes the 12th century. She did not discover she was autistic until she was 30 but has spent the years since saying “yeah, that makes sense.” She lives with her parents, her familiar and the other pets.

Where to Find Holly:

Keira Soleore writes for the International Examiner and Cogitations & Meditations. She enjoys connecting with readers on Twitter (@keirasoleore) and through her website (www.keirasoleore.com). Her interests include medieval manuscripts, philosophy, poetry, picture books, choir, sunshine and beaches. Keira is a pseudonym.
All Posts
PrevPreviousBook Recs for Every Mood
NextHere’s Why I’m obsessed with “Dickinson” and Why You Should Be Too by Maya RodaleNext