Exclusive: How to Fail at Flirting by Denise Williams Excerpt 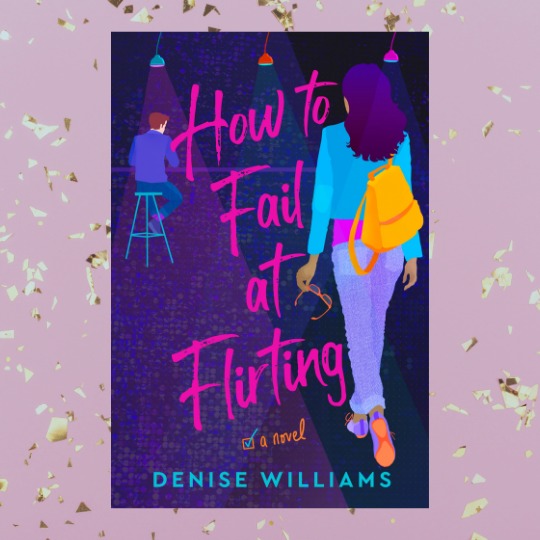 We are so excited to bring you this exclusive excerpt of How to Fail at Flirting by Denise Williams. But first, a note from the author herself:

“I’m excited to share How to Fail at Flirting with you! I started writing this book when I was lost and flirting with the idea of doing something big. Writing Naya’s journey finding footing, love, and ultimately herself has been a joy. Whether it’s work, love, or you’re flirting with your own new adventure, I hope you enjoy this story!” 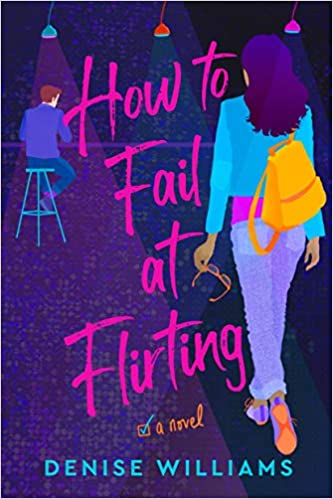 About How to Fail at Flirting:

One daring to-do list and a crash course in flirtation turn a Type A overachiever’s world upside down.

When her flailing department lands on the university’s chopping block, Professor Naya Turner’s friends convince her to shed her frumpy cardigan for an evening on the town. For one night her focus will stray from her demanding job and she’ll tackle a new kind of to-do list. When she meets a charming stranger in town on business, he presents the perfect opportunity to check off the items on her list. Let the guy buy her a drink. Check. Try something new. Check. A no-strings-attached hookup.  Check…almost.

Jake makes her laugh and challenges Naya to rebuild her confidence, which was left toppled by her abusive ex-boyfriend. Soon she’s flirting with the chance at a more serious romantic relationship—except nothing can be that easy. The complicated strings around her dating Jake might destroy her career.

Naya has two options. She can protect her professional reputation and return to her old life or she can flirt with the unknown and stay with the person who makes her feel like she’s finally living again.

“Did I convince you to dance with me?”

I raised my arms over my head, positioning my hands the way my dad had taught me in my childhood driveway, and mimicked shooting a basket. “Nothing but net.”

Do something embarrassing. Here goes nothing.

He reached for my hand, lacing his fingers with mine, and we walked together toward the crowd, where the music blared from large speakers, the percussion and horns building a palpable energy around us. Jake gripped my hand tighter as we ducked through the throng of bodies.

Onstage, a man with a microphone instructed the crowd. Near us, a middle-aged couple in matching blue T-shirts and jean shorts held each other, and two women in their seventies juggling brightly colored cocktails and pretzels ignored the instructions and made up their own steps.

The voice boomed from the stage. “Okay! Let’s get going, now that we’ve learned the basic steps.”

“We missed the beginning already,” I said into Jake’s ear.

He shrugged. “We’ll catch up.”

“Jake!” I hissed again, a touch of panic rising in me, not knowing what would come next. I looked at the couples near us to see their movements, trying to memorize how they moved to the loud beat.

“We’ll be fine,” Jake encouraged as he slid his arm around me, his palm resting against a shoulder blade. “Follow my lead. I’ll step forward and you step back and then the other way.” His lips grazed the top of my ear, and I willed him to trail down to my neck again to that spot that had made me shudder in anticipation the night before.

From the stage, the voice boomed through the microphone. “And one, two, three.” Around us, the crowd undulated like a wave.

Jake pushed toward me gently, stepping forward with one foot, but I was focused on what the woman next to me was doing and I didn’t move in time, so his body collided with mine. He chuckled and spread his fingers across my back, which felt amazing, and I got distracted and stepped with the wrong foot the next time, bumping into his chest again. My gracelessness knew no bounds.

How does everyone else already know how to do this?

I growled at myself, huffing out a heavy breath and pausing my movements to catch back up to the beat. All I had to do was step forward and back, right? I have a flippin’ PhD. I can figure this out.

“You’re a bad liar,” I returned over the music, taking a successful step forward but then second-guessing myself on the next beat and stepping on Jake’s foot. It’s literally counting to three and knowing left from right.

“Here,” Jake said, pulling me flush against him, our thighs touching, chests against each other. Sandalwood and soap filled my nostrils, and my frustration about dancing ebbed into more memories from the night before. “I’ll push my leg against yours, and we’ll step together, okay?” He nudged my left leg with his right on the beat, and our hips twisted in unison then back, and I followed his movements, relishing the roll of his body against mine as we moved with the music. The crowd fell away. There was only the beat and him. I stopped worrying about the steps and followed his lead. A minute passed, the music swirling around us, our bodies flush.

“Don’t overthink it.” Jake spoke near my ear, his hot breath stroking my skin, and I stifled a sigh, a tingle zipping through me. “Trust me, okay?”

He has no idea what he’s asking. I’d never been a good dancer, but I had been an eager dancer for most of my life. Not knowing the steps and being hopelessly without rhythm had never stopped me from getting on the dance floor until Davis told me I was embarrassing him. By the time he stopped telling me and started showing his disappointment or anger, I’d long since stopped dancing.

“One, two, three,” the man onstage counted, and he and his partner demonstrated some kind of complicated spin as we rocked back and forth. He said something about the left foot—or was it the right? Crap, I’d missed a few key details. I was comfortable with the step we’d been doing—that was my dancing sweet spot, and I worried if I broke the rhythm it would never come back.

“Five, six, seven.” The instructor counted the beats from the stage. Did he say step forward on four or five?

Jake squeezed my hand and raised his arm with a reassuring grin, nudging me to spin. The slick soles of my sandals helped my movement, and I twirled, clutching his hand, the breeze and motion catching the light fabric of my top. I spun once, then twice, the crowd and the lights from the stage a blur. I wasn’t graceful, and the spin stopped when I tripped into Jake, steadying myself against him.

I laughed into his chest. “I told you I was no good.”

“I’m having fun.” He guided me back to the beat, and we moved together. “Plus, it gives me an excuse to touch you.”

I glanced up to meet his eyes. “Were you looking for one?”

His hips rolled with mine, and a heavy breath escaped my lips as he cupped the back of my neck. “Hoping for one.” The pressure and rhythm of our bodies in the middle of this crowd, the music blasting all around us—it was too much. We’d been laughing and teasing, but that all seemed to fade into the heat of the moment as our steps slowed. His gaze was intent on mine like he was seeing something rare and cataloging it in every detail.

No one has ever looked at me like this.

He lowered his chin, and I closed my eyes in anticipation of his soft but unyielding kisses. I opened my eyes suddenly when the music changed and the surrounding crowd surged at the popular tune, jostling us. New people moved closer to the stage, and the crowded dance floor was instantly packed. I glanced left and right, panicked at the sudden influx.

Jake must have read my expression, because he took my hand. “C’mon. I’ve got an idea. You’ll like this better.

Denise Williams is the Assistant Director of Multicultural Student Affairs at Iowa State University and teaches undergraduate and graduate courses periodically. She also regularly does diversity/inclusion/social justice training. She is on the National Advisory Council for the National Conference on Race and Ethnicity in Higher Education and the editorial board for the Journal Committed to Social change in Race and Ethnicity. HOW TO FAIL AT FLIRTING is her first romance novel.

Where Romance and Pop Culture Live Happily Ever After.
All Posts
PrevPreviousExclusive: Men are Frogs by Saranna DeWylde Cover Reveal!
Next10 New Indie Books to Add to Your Book Stack by Stephanie ElliotNext