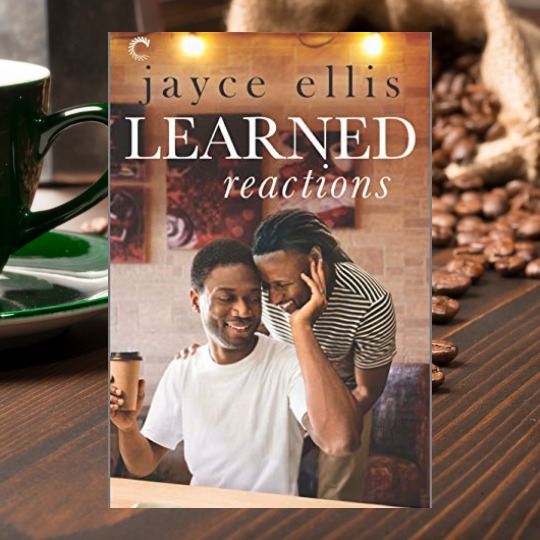 [Note from Frolic: We’re so excited to bring you this exclusive excerpt from Learned Reactions by Jayce Ellis! First, a note from Jayce Ellis herself!]

I’m so thrilled to be here, and to share Carlton and Deion with you guys. Take the best of friends, combine it with twenty years of unrequited love, a whole bunch of self-erected barriers, family drama, and friends who insist on giving their unsolicited opinions, and voila! These guys aren’t exactly shy about expressing their opinions, but figuring out what to do with them? That’s another story altogether. The excerpt below gives the tiniest hint of that. I hope you love them as much as I do. 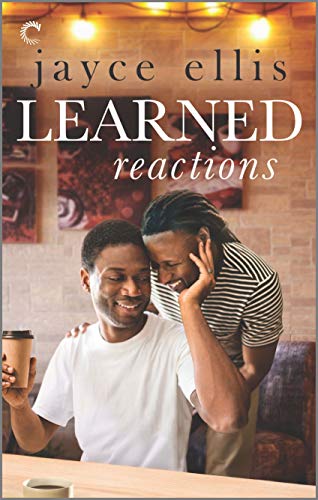 Carlton Monroe is finally getting his groove back. After a year playing dad to his nephew and sending him safely off to college, it’s back to his bachelor ways. But when his teenaged niece shows up on his doorstep looking for a permanent home, his plan comes to a screeching halt. Family is everything, and in the eyes of social services, a couple makes a better adoptive family than an overworked bachelor father. A fake relationship with his closest friend is the best way to keep his family together.

If things between him and Deion are complicated, well, it only needs to last until the end of the semester.

Living with Carlton is a heartbreak waiting to happen, and once the adoption goes through, Deion’s out. He’s waited two decades for Carlton to realize they’re meant for each other, and he’s done. It’s time to make a clean break. But it’s hard to think of moving away when keeping up the act includes some very real perks like kissing, cuddling and sharing a bed.

Even the best charades must come to an end, though. As the holidays and Deion’s departure date loom, the two men must decide whether playing house is enough for them—or if there’s any chance they could be a family for real.

“Do Gram and Pops know you left?”

The look on her face told him everything he needed to know. Dammit. Now he had to call them to make sure they knew she was safe. The way he skirted conversations with Deion had nothing on the way he wanted to avoid this one. This one, though, he had no choice on.

“Calling them now,” Carlton said, holding up his phone. “I have to let them know you’re with me. You good with that?”

Olivia shrugged, the feigned nonchalance Carlton had spent the evening striving so hard for coming naturally to her. He dialed his parents’ number and waited. No one picked up, and he didn’t know if he was surprised or not. They had to know she was gone, right? Maybe they weren’t at home, off looking for her. They didn’t have cell phones or, if they did, they damn sure hadn’t given him the number, which would be a strange sort of karma.

Carlton left a message, leaving his number to be on the safe side, then looked around. He hated the idea of kicking Deion out of the spare bedroom, but no way did he expect Olivia to sleep on the couch. Hell, he could give Deion his bedroom and he’d crash on the couch. It was only a few days anyway. Yeah, that would work.

Deion, who’d made himself scarce longer than it took to change the sheets, walked back out in pajamas, a pillow in hand. Carlton hadn’t missed that he’d been fully dressed, knocked out on the sofa, when Olivia had arrived. Yeah, they had a lot to discuss.

“I changed the sheets on the bed for you,” Deion said to Olivia. “Do you have pajamas?”

Olivia shook her head, suddenly looking every ounce the young teenager she was. She gnawed her lower lip. “I don’t want to put you out,” she said, her voice just barely above a whisper. “I can sleep on the couch.”

“Absolutely not.” Deion’s voice brooked no argument, and Carlton felt a slice of shame that he got kind of hot at the sound. “You’ll sleep there, and I’ll sleep out here. I’m only in town for a few more days anyway.”

Another reminder of all the things Carlton still needed to do, to say, to make things right with him.

“Well, if you’re sure,” Olivia said, her voice quiet and soft. And hopeful.

“Absolutely.” Deion smiled, and Olivia smiled back. The first one she didn’t try to hide.

Olivia stood, nodded at Deion, and stepped in front of Carlton. She gave him a quick hug, muttered, “Thanks, Uncle C,” and walked down the hall toward the back bedroom on silent feet. The door clicked softly behind her.

Deion looked at Carlton. “Man, what the fuck?”

He shook his head. “I don’t even know. I didn’t even know she knew where I lived, and I damn sure didn’t expect her to show up.”

Deion nodded. “Figured as much. You call your parents?”

“They didn’t answer. I don’t know if they’re out looking, or if they even know she’s gone.”

Deion blew out a breath. “Let’s try to get some rest, and we’ll deal with it in the morning. Got a feeling it’s going to be a long day.”

Wasn’t that the damn truth? Carlton watched as Deion pushed the coffee table out of the way and rolled up the area rug, then tossed the couch cushions to pull the sleeper out. He cleared his throat. “You don’t have to sleep here, you know.”

Deion paused with a hand on the mattress. “Where else would I sleep?”

Carlton inhaled sharply. He’d planned to let Deion have his room, and he’d take the couch, but the idea of sleeping with his best friend’s arms surrounding him? His dick stirred at the thought.

Then Deion shook his head and pinched the bridge of his nose. “I’m sorry, man. I shouldn’t have said that.”

Carlton cocked his head to the side. “Said what?”

“Teased about sleeping with you. Now’s not the time for that.”

Carlton crooked a smile and sidled closer, letting his hand fall on Deion’s hip. It felt right. More than it should have. “It’s never a good time for us, is it?”

A tight laugh fell from Deion’s lips. His chest expanded, then fell, and he looked at Carlton with so much undisguised want it sucked all the air out between them. Now that Carlton knew what it was, he couldn’t unsee it. Didn’t know how the hell he’d missed it all these years.

Deion’s tongue darted out over his lower lip, and Carlton was struck with the urge to taste him. To know—to remember—what it felt like to have Deion against him. To remind himself why being with Deion was a bad idea. Or maybe the best idea.

Jayce Ellis started writing as a child (just ask the poor sixth-graders forced to listen to her hand-written cozy mystery), then made the tragic mistake of letting the real world interfere for the next two decades. When she finally returned to her first love (her husband and two turtles, Chompers and Desi, remain locked in an eternal battle for second), she’d transitioned from mystery to romance, and there she’s found her true passion.

Jayce writes about people a bit like her, Black and queer and striving to find the good in a world fixated on the bad. She prefers her angst low and her characters hot—a term encompassing all shapes, sizes, and complexions.

There may be a hint of irony in Jayce’s day job as a family law attorney, but she soothes herself in worlds where people communicate and find a way to work things out and reach a real and true HEA, even if there’s rarely a neat, tidy little bow wrapping everything else up. Because really, where’s the fun in that?

Where Romance and Pop Culture Live Happily Ever After.
All Posts
PrevPreviousTrope Rec Tuesday: Marrying My Best Friend
NextRapid Fire: A Chat with Author Jennifer DupeeNext