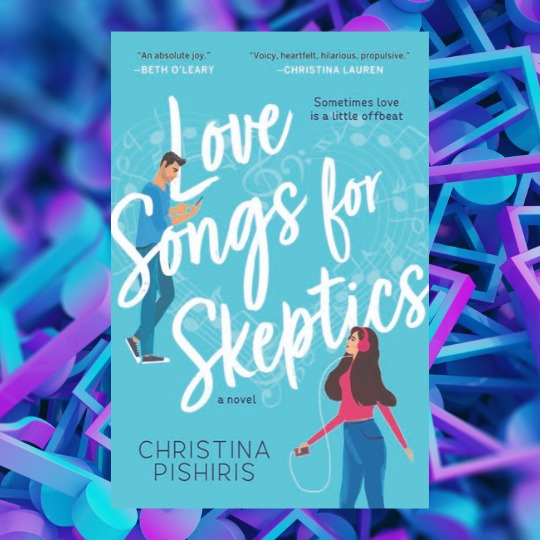 We are so excited to bring you this exclusive excerpt of Love Songs for Skeptics by Christina Pishiris, out January 5, 2021! 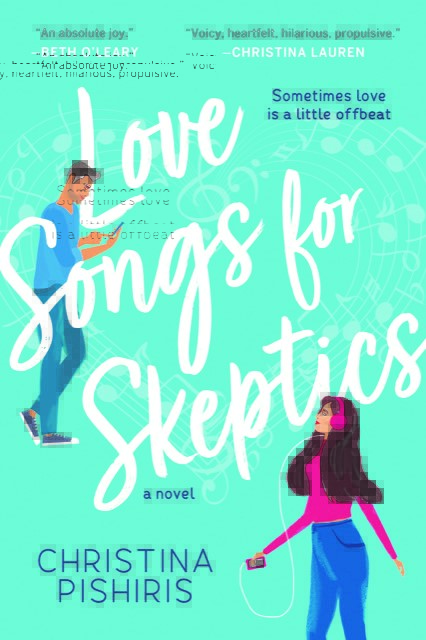 About Love Songs for Skeptics:

Zoë Frixos is a successful music editor, intent on restoring her magazine to its former glory, despite those pesky closure rumors. In an attempt to save the magazine—and her career—she decides to land the story of the century: An interview with her notoriously reclusive rock idol. There’s just one problem: Nick Jones, the arrogant publicist who seems determined to stop the story and ruin her career.

As Zoë barters for a career-saving interview, she faces a decision that could change her life. Will she commit to her skepticism about romance or will she finally recognize that it’s time to change her tune?

I’m not saying I don’t believe in love, but my last relationship ended after twelve days.

We might have managed a full fortnight if I hadn’t come back early from a weekend away and found him with his hand down a barmaid’s shirt.

Shame, really. It was my local, and they do 2-for-1 mojitos on Sunday nights.

If anybody asks, I tell them my one true love is music. I can honestly say it’s what gets me through long days and lonely nights. I can listen to almost anything, but the one thing I can’t stand is a schmaltzy love song.

My brother’s getting married in a few weeks and has asked for help picking a song for his first dance. I suggested Kiss’s “Love’s a Slap in the Face.”

It didn’t go down well. He’s still trying to find the perfect song.

But all songs are imperfect. That’s what makes us keep listening. Who wants perfection? I suggested he write his own song, but I think he decided it was too much work.

I’ve got a bit of a track record for making stuff up. Before I became a music journalist and got paid to interview real-life musicians—I still have to pinch myself sometimes—I invented my own personal rock star. That’s how I came to be president of the Zak Scaramouche Fan Club, which, at last count, had exactly two members: me and Simon Baxter.

Simon and I made up Zak Scaramouche when we were twelve, using the initials of our names: “Z” for Zoë and “S” for Simon. We imagined him as a kind of rock star secret agent—James Bond with eyeliner, if you will.

Simon was the one who wanted him to be a secret agent. GoldenEye had come out and he was obsessed with Pierce Brosnan. Zak combined the two roles effortlessly, strumming a Les Paul while a loaded Walther PPK sat discreetly in his shoulder holster. In my head he always looked like Jim Morrison or Marc Bolan: tousled dark hair and piercing eyes ringed with kohl. What better cover for a spy than a glam rocker partial to makeup? And who’d suspect that under his unbuttoned shirt and snakeskin trousers, he’d be packing a license to kill?

Zak always timed his concerts to coincide with missions, and the fan club was how he communicated with his sources.

When one of us went on holiday, we’d send the other a postcard from Zak. The first one Simon sent me featured a donkey wearing a sun hat under the moniker: Greetings from Lanzarote! On the back, his neat handwriting swallowed all the white space.

I’m in sunny Lanzarote for an open-air concert at the Playa Blanca. Rehearsals are going great, but damn, that sand gets everywhere!

I’ve been super busy. Since releasing my tenth album and divorcing my fourth wife, I’ve taken up the classic card game Baccarat—I’m a natural!

In unrelated news, international arms dealer the Crook has been spotted at Lanzarote’s Royale Casino, a short drive from Playa Blanca.

That’s all for now, fans.

Those postcards meant the world to me. I was young and hopeful then. I still believed that bad guys always got their comeuppance and that love was all hearts and flowers. But as I got older and the postcards petered out, I seemed to lose my faith in romance. And after Simon got married, the postcards stopped altogether. I blamed the internet. Who sent anything by post anymore? The internet ruined love too. Dating apps encouraged you to make split-second judgments about people. What happened to getting to know someone slowly? Life moved too fast for that.

But about a year ago I was invited to join the Zak Scaramouche Fan Club page on Facebook, so our secret childhood club was reborn. Nothing had changed. We were still the only two members, and Zak was still trotting the globe wowing fans in between catching bad guys.

As for Simon and me, we kept doing the Fandango, shuffling around our feelings for each other via an imaginary rock star, never quite getting the steps right.

Christina Pishiris was born in London to Greek Cypriot parents, who used to bribe her to go to family weddings by promising that George Michael might be there. She started her career as a journalist and also works on music documentaries. Love Songs for Skeptics is her debut novel.

Where Romance and Pop Culture Live Happily Ever After.
All Posts
PrevPreviousTrope Rec Tuesday: Sex Lessons Turn Into Something More
NextDaily Frolic: Vanessa Fewings’s ENTHRALL is Being Adapted!Next