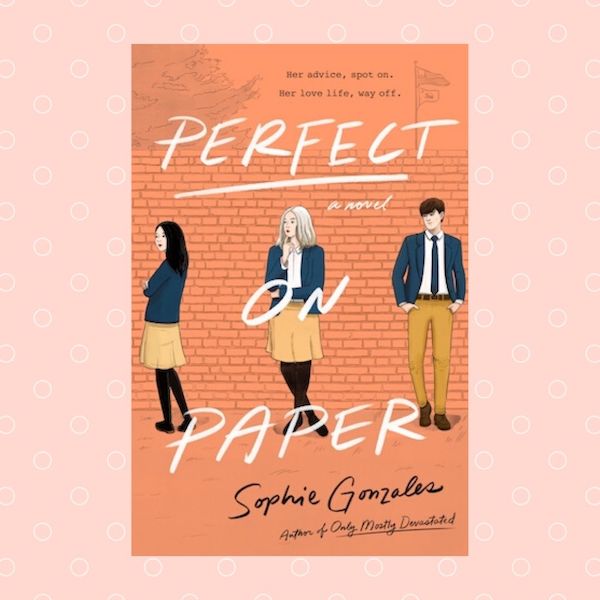 We are so excited to bring you an exclusive excerpt from Perfect on Paper by Sophie Gonzlaes, out March 9, 2021.

About Perfect on Paper:

Darcy Phillips:
• Can give you the solution to any of your relationship woes—for a fee.
• Uses her power for good. Most of the time.
• Really cannot stand Alexander Brougham.
• Has maybe not the best judgement when it comes to her best friend, Brooke…who is in love with someone else.
• Does not appreciate being blackmailed.

However, when Brougham catches her in the act of collecting letters from locker 89—out of which she’s been running her questionably legal, anonymous relationship advice service—that’s exactly what happens. In exchange for keeping her secret, Darcy begrudgingly agrees to become his personal dating coach—at a generous hourly rate, at least. The goal? To help him win his ex-girlfriend back.

Darcy has a good reason to keep her identity secret. If word gets out that she’s behind the locker, some things she’s not proud of will come to light, and there’s a good chance Brooke will never speak to her again.

Okay, so all she has to do is help an entitled, bratty, (annoyingly hot) guy win over a girl who’s already fallen for him once? What could go wrong?

Everyone in school knows about locker eighty-nine: the locker on the bottom right, at the end of the hall near the science labs. It’s been unassigned for years now; really, it should’ve been allocated to one of the hundreds of students in the school to load with books and papers and forgotten, mold-infested Tupperware.

Instead, there seems to be an unspoken agreement that locker eighty-nine serves a higher purpose. How else do you explain the fact that every year, when we all get our schedules and combinations, and lockers eighty-eight and ninety meet their new leasers, locker eighty-nine stands empty?

Well, empty might not be the right word here. Because even though it’s unassigned, locker eighty-nine ends most days housing several envelopes with almost identical contents: ten dollars, often in the form of a bill, sometimes made up of whatever loose change the sender can gather; a letter, sometimes typed, sometimes handwritten, sometimes adorned with the tell-tale smudge of a tearstain; and at the bottom of the letter, an email address.

It’s a mystery how the envelopes get in there, when it’s rare to spot someone slipping one through the vents. It’s a bigger mystery, still, how the envelopes are collected, when no one has ever been spotted opening the locker.

No one can agree on who operates it. Is it a teacher with no hobbies? An ex-student who can’t let go of the past? A big-hearted janitor who could use some cash on the side?

The only thing that’s universally agreed on is this: if you’re having relationship issues and you slide a letter through the vents of locker eighty-nine, you will receive an email from an anonymous sender within the week, giving you advice. And if you’re wise enough to follow that advice, your relationship problems will be solved, guaranteed, or your money back.

And I rarely have to give people their money back.

In my defense, in the few cases that didn’t work out, the letter left out important information. Like last month, when Penny Moore wrote in about Rick Smith dumping her in an Instagram comment, and conveniently left out that he did it after finding out she’d coordinated her absent days with his older brother so they could sneak off together. If I’d known that, I never would’ve advised Penny to confront Rick about the comment during lunch the next day. That one was on her. Admittedly, it was kind of satisfying to watch Rick perform a dramatic reading of her texts to his brother in front of the whole cafeteria, but I would’ve preferred a happy ending. Because I did this to help people, and to know I made a positive difference in the world; but also (and maybe even mostly, in this case), because it pained me to drop ten dollars into Penny’s locker all because she was too proud to admit she was the one in the wrong. Problem is, I couldn’t defend myself and my relationship expertise if Penny were to tell everyone she didn’t get a refund.

Because no one knows who I am.

Okay, I don’t mean literally. Lots of people know who I am. Darcy Phillips. Junior. That girl with the shoulder-length blond hair and the gap between her front teeth. The one who’s best friends with Brooke Nguyen, and is part of the school’s queer club. Ms. Morgan-from-science-class’s daughter.

But what they don’t know is that I’m also the girl who hangs back after school while her mom finishes up in the science labs, long after everyone else has left. The girl who steals down the hall to locker eighty-nine, enters the combination she’s known by heart for years—ever since the combination list was left briefly unattended on the admin officer’s desk one evening—and collects letters  and bills like tax. The girl who spends her nights filtering stranger’s stories through unbiased eyes, before sending carefully composed instructions via the burner email account she made in ninth grade.

They don’t know, because nobody in school knows. I’m the only one who knows my secret.

Or, I was, anyway. Up until this very moment.

Sophie Gonzales was born and raised in Whyalla, South Australia, where the Outback Meets the Sea. She now lives in Melbourne, where there’s no outback in sight, but slightly better shopping opportunities. Sophie loves punk music, frilly pink skirts, and juxtapositions.

Sophie has been writing since the age of five, when her mother decided to help her type out one of the stories she had come up with in the bathtub. They ran into artistic differences when five-year-old Sophie insisted that everybody die in the end, while her mother wanted the characters to simply go out for a milkshake.

Since then, Sophie has been completing her novels without a transcriptionist. Find her here: https://www.sophiegonzalesbooks.com/

Where Romance and Pop Culture Live Happily Ever After.
All Posts
PrevPrevious9 Must-Read Romance and Ice Cream Pairings to Lick Up this Summer
NextTrope Rec Tuesday: Add These Upcoming Hate to Love Romances To Your Wishlist ASAPNext