When I heard dynamic twin duo GL Tomas were going to be publishing a new sports romance, I was beyond excited. You should all read their backlist; there is something for every reader. Fantasy, vampires, YA, cowboys, you name it, they have it. I swear we GL Tomas fans are just waiting for the next book to publish to read immediately.

I’m happy to be revealing this beautiful cover with you. We also have a little behind-the-scenes take from the authors about the inspiration behind this novel. 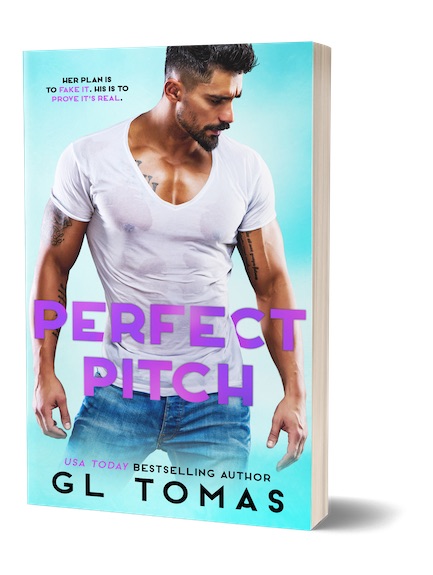 Adopting that mantra won her the attention of the largest sports PR firm in the country. Toya only had one task standing in her way of becoming a partner, but she was used to facing tough challenges.

Until that obstacle became a herculean, dimpled Boricua and his wacky ass family with a penchant for scandalous antics.

Kelly “K-Rod” Rodriguez has always had it all. Incredible talent, muscles worthy of a magazine spread and just enough book smarts to balance out his street. After suffering the loss of a World Series and gaining a life-altering injury, the aging Major League shortstop has two strikes against him. Now the only woman capable of spinning this disaster is the one who made it clear to him that their past hookup was just that—a hookup.

When the tabloids misconstrue the nature of their relationship over a heated viral dispute, there’s only one way to find themselves out of it. To fake a relationship.

Kelly regrets the decision he made years ago choosing his career over a relationship with the bombshell publicist but now that they’re thrown back into each other’s arms, he’ll do whatever it takes to hit a home run.

Behind-the-scenes: GL Tomas share with us their inspiration behind their upcoming romance story

It’s safe to say the state of Afro-Latinx representation could use amplifying. While the conversation around Afro-latinidad is growing (conversation starters like Zahira/Bad Dominicana and Amara La Negra definitely made it more well known through the power of social media), in fiction, we are nowhere where we need to be.

That isn’t to say it’s not there. There have been some really strong authors (Ibi Zoboi and Elizabeth Acevedo in YA; Zaida Polanco and Nadine Gonzalez in romance to name a few) highlighting what it’s like to be a Black person in a Latinx space, it often feels like Afro-Latinx has become a buzzword. An identity with no substance.

It’s getting better, but it’s not uncommon for many to pick up a book celebrated for its inclusion of Afro-Latinx narratives, but show very few examples of examining those characters’s Blackness and how it’s an identity all on it’s own.

Perfect Pitch has always been our dream story to tell. While not all our identities make the page, some of the challenges writing Toya Banegas’ narrative–the heroine–was showcasing the uniqueness in her Afro-Panamanian heritage.

There are many light and fun things about Perfect Pitch that help push this romantic comedy through. It’s a Sports Romance. It’s fake relationship. It’s second chance and while it’s not the only one of its kind, it highlights some of the unique struggles of what it’s like to be Black in a Latinx space, juggling about as many tropes as Toya’s identities.

Toya Banegas is a Black Panamanian, while her cinnamon roll hero is a white-presenting man of Puerto-Rican descent. To many that appears to be a Latinx couple, but there are a handful of intersections to their union not often highlighted with a very dark skinned Black woman and a white presenting man with cultures that share a number of similarities.

Much like the both of us, Toya’s Latinx identity gets called into question (due to her West Indian grandparents), while in African-American spaces, her Blackness is questioned. We can’t count the handful of times our Latinx co-workers often dismiss our Latinx identity because our skin color confuses them, whilst our non-Latinx Black co-workers are often shocked at the some of the major differences Black people in Latinx spaces are forced to exist to survive it.

We’ve gotten sprinkles of it in some great content like On My Block (amazing show), Don’t Let Me Drown (great movie) and nearly every single Elizabeth Acevedo book (read all her books; even just the ones she narrates). But seldom have we felt brave enough to showcase it in our own work, as it’s scary to admit the beauty and ugly of being a Black Latinx woman.

It’s not all struggle. Perfect Pitch allows a man unlearning past behavior to become a sweet, hilarious at times, courageous hero. With a heroine like Toya, who is healing from past trauma, watching her balance her career and love is something most people can relate to. Though, this story couldn’t be told without her unique experience. And we can’t wait for Romancelandia to see it!

G.L. Tomas is a USA Today bestselling twin writing duo and lover of all things blerdy, fearless and fun. When they’re not spending their time crafting swoon-worthy heroes, they’re battling alien forces in other worlds but occasionally take days off in search mom and pop spots that make amazing pasteles and tostones fried to perfection.

They host salsa lessons and book boyfriend auditions in their secret headquarters located in Connecticut.

Hi, I'm Sil! 21. Mexico. she/her pronouns. I am the owner of the book blog, The Book Voyagers, where I blog and review books. Mainly, I focus on recommending and reviewing diverse books written by marginalized authors. You might also know me for doing book aesthetics and just shouting in capital letters about new books releasing. I'm a big fan of Adult Romance, but I also love Young Adult especially contemporary fiction and fantasy.
All Posts
PrevPreviousYour Favorite Small Town Romance Authors Talk All About This Much Loved Trope
NextDaily Frolic: Daniel Radcliffe Reading Thirst TweetsNext