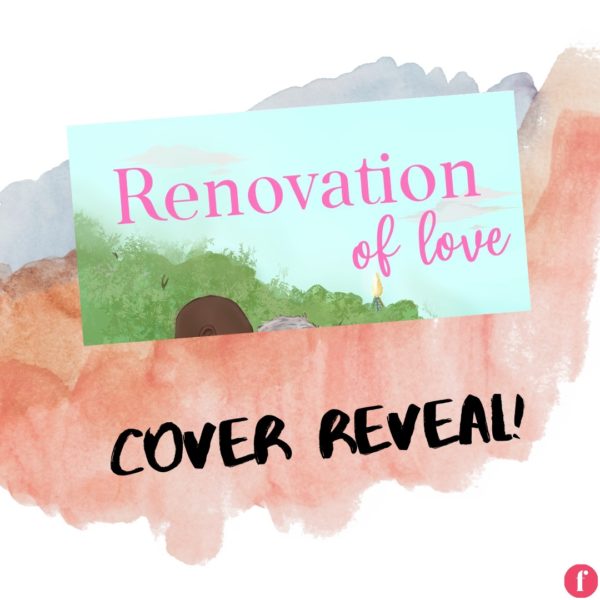 The time has come!!!! First of all, hi, it’s so nice to see you (or write to you) again. Hope you are doing okay and that this post brings you a bit of joy! If you don’t know Meka James or her writing, I seriously think you should change that immediately. Renovation of Love, her upcoming romance, comes out March 20th, and you better be ready to read it. You’re about to know a lot about this book so let’s start the post, alright? The cover is designed by Kylie Sek of Cover Culture, and illustrated by Tamara Davies. 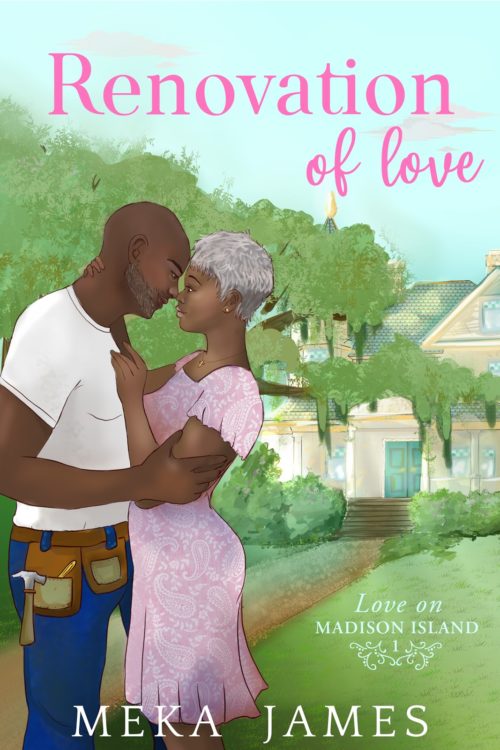 About Renovation of Love

Forty-three and jobless, Cynthia Marshall finds herself in the last place she’d expected, back home on Madison Island, GA. Her small hometown holds the ghosts of choices past. From the large Victorian she inherited from her beloved aunt, to unresolved family issues, and the boy turned man she left behind over two decades ago.

Starting a new career is hard enough but having to do so side by side with a person whose heart she broke is something she never accounted for.

Marcel Lewis is the owner of the only construction company on the island and is the key to making Cynthia’s new dream a reality. He never quite got over the abrupt departure of the first woman he ever loved. Her return means he can finally get answers to the whys and what-ifs that have plagued him.

Years have passed, feelings have remained, but some wounds have yet to heal. The more time they spend together, the walls of the old house aren’t the only ones tumbling down. But they can’t construct a future without answering for decisions of the past.

I tried to ignore Cynthia standing on the porch in the dark green tank top and a pair of body-hugging capris yoga pants. It was too damn early in the morning for her glorious form to be sending my mind on a one-way trip to gutterville. Curvaceous hips and shapely legs. Topped off with a smile that had no business making me warm like a ray of sunshine.

First day of work on her project and while I expected her to pop in to check on things, I didn’t think she’d be here from the start. Nor did I expect her to want to help. After giving instructions to the crew, I sighed then grabbed an extra crowbar and sledgehammer from the back of my truck.

“You know this is going to be nothing like you see on TV right?”

She simply smiled then moved the mask dangling around her neck up and over her nose and mouth. Hitting things would certainly be an outlet for the slew of frustrations I was handling of late.

First day of work on her project and while I expected her to pop in to check on things, I didn’t think she’d be here from the start. Nor did I expect her to want to help. After giving instructions to the crew, I sighed then grabbed an extra crowbar and sledgehammer from the back of my truck.

“You know this is going to be nothing like you see on TV right?”

She simply smiled then moved the mask dangling around her neck up and over her nose and mouth. Hitting things would certainly be an outlet for the slew of frustrations I was handling of late.

The symphony of banging, shouting, cussing was already underway when we entered the house. MJ was heading up the work on the second floor, opening the walls and checking the electrical and plumbing before we could make a final determination on what the old house could handle as far as turning the third-floor attic space into her owner’s suite.

That left us to tackle the beginning work in the kitchen.

“Okay, molding off first.” I handed her the crowbar and the hammer from my tool belt.  She looked at the two pieces in her hands then back up at me. With her eyes alone, I knew she was probably cussing me out in her head while waiting on further instructions. After sliding my own gloves on—more to protect myself from the electric feeling of touching her skin—I placed my hand on her shoulders and turned her toward the door frame.

“Like this.” I stepped closer, wrapping my arms around her so I could control her movements.

Sure, I could have simply shown her by doing it first, but my brain ignored that logic and opted for putting me more in harm’s way, so to speak, by being close to her. Playing puppet master, I placed the crowbar hand by the wide frame and then made her other lightly tap it just enough to pull it free from the wall.

“You have to go slow and steady,” I said, leaning close to her ear. Her shea butter scent filled my nostrils, and it took an amazing amount of self-control to not kiss the small space of flesh. “Too rough and you’ll crack it. Take your time, be gentle and…” Three more taps and the piece pulled free.

Keeping control, I moved her arms lower, the change of position forcing her to bend. As a result, the ass I’d been taking every opportunity to stare at pushed into me. I nearly groaned from the contact.

She looked back over her shoulder, her eyes glimmered with amusement. It could have been an accident, but she wiggled that fine ass against me with the next taps to break loose another section.

She won that game of chicken as I took a step back before she knew exactly how good she’d been. Yeah, I needed to punch holes in something to keep my hands busy.

“One down, two more to go. Although I’ll get the top piece. I don’t want you trying that while on a ladder.”

“Always trying to look out for me.”

“I guess old habits die hard.” And just that quickly the energy changed. “You finish that, I’m going to start on the appliance removal.”

Hi, I'm Sil! 21. Mexico. she/her pronouns. I am the owner of the book blog, The Book Voyagers, where I blog and review books. Mainly, I focus on recommending and reviewing diverse books written by marginalized authors. You might also know me for doing book aesthetics and just shouting in capital letters about new books releasing. I'm a big fan of Adult Romance, but I also love Young Adult especially contemporary fiction and fantasy.
All Posts
PrevPreviousFinding Broadway Magic by Melanie Crowder
NextTrope Rec Tuesday: Oops! We are Stranded TogetherNext