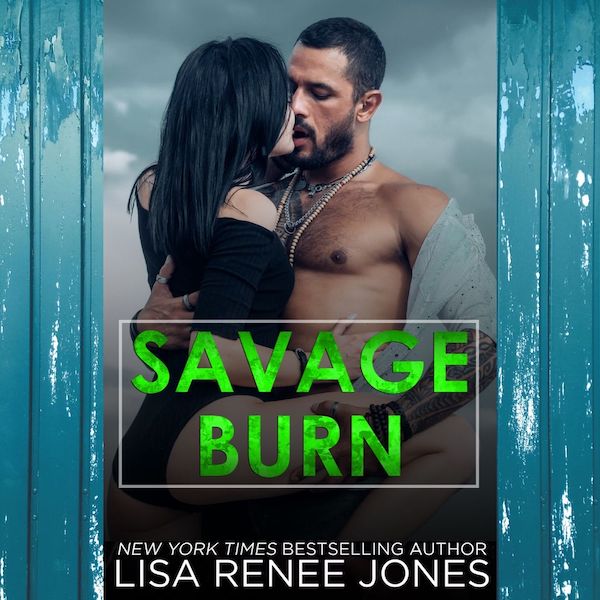 The second book in Lisa Renee Jones’ Savage Trilogy, Savage Burn, is out today. This series is classified as romantic suspense, and it is very suspenseful, for sure; but, it’s also a big-time second chance love story. To catch you up, Rick Savage fell in love with Candace Marks years ago, but he walked away and left her heart and soul shattered. Now he’s back and is hell-bent on saving Candace from a seriously bad dude, a dude hell-bent on marrying her.

Rick is a character we’ve seen in other books by Lisa Renee Jones, and it’s nice to flesh out his character finally. Savage Burn digs into the conspiracy surrounding Candace, her dad, and the man she’s supposed to marry. Ripe with intrigue, Savage Burn is the apex of the trilogy, complete with a nasty cliffhanger. Have no fear; Rick and Candace are better together than they are apart, and finally, FINALLY, they are on the same page about that!

Check out our **hot** exclusive excerpt from Savage Burn and keep reading for your chance to win a really cool giveaway that’s open internationally!

No matter how much I love him, my love will never be enough to overcome the torment inside this man. And yet, I think I’m the only chance he has to survive that torment. He’s going to shred my heart, but I don’t care. I’m going to fight for him. I try to pull back, to put just enough space between us that I can look him in the eyes and claim control over this push and pull between us that is out of control.

Rick isn’t having it. He pulls me back, his big hand framing my waist. “Don’t do this,” he says, clearly reading my move as withdrawal. “I’m begging you.”

“Walking away. Pulling away from me. That’s you dividing us. Don’t you do what I’ve done so well. Too well.”

“You think that because that’s your reaction. That’s what you did, but I wasn’t walking away. I wasn’t pulling away. I was most likely about to punch some logic into you because nothing else is working. I asked a question, and you turned it into a reason to leave me. I can’t love you this much again and have you leave.”

He catches strands of my hair in his fingers, his free hand pressing to my lower back, molding me close. “Young and fucked in the head did not serve us well, but I love you too damn much to ever leave you again.”

My hand presses to his chest and I can feel his heart thundering, pounding a beat as wild as mine. He’s angry. Or hurt. I don’t know what he is anymore. I’m about to tell him that I don’t believe him, but that’s okay. I’m going to hold onto him so damn tightly that he can’t run, but I never get the chance. I open my mouth but he’s already taking me some place else. “Do you know what I thought before I walked into Tag’s hideout and confronted him?” he asks.

Shock radiates through me. “Oh, God. You walked into Tag’s place and confronted him?”

“Do you know what I thought?” he repeats, his voice all but guttural.

“That I was going to kick your ass when I found out? Stop acting like you’re okay with dying any day now. Because you don’t get to walk away again. You damn sure don’t get to die.”

“I thought,” he continues, “that you might be better off without me, but I’m not better off without you. Every moral line I didn’t cross these eight years was because of you, Candace. Every moment I wasn’t with you, you were with me. I love you. I love you so damn much it hurts to breathe when I’m not with you. I was burning alive without you every fucking day and night.”

My heart swells with the rough, emotion-laden confession and my fingers curl around his shirt. “Then know this, Rick Savage. I’m afraid. I am. That’s real. That’s honest, but I’m also a military brat. I’m my mother’s and father’s daughter. Fear makes me want to fight. For you. I want to fight for you and us. I want to fight every war you face with you. And you are better with me. But I am also so much better with you. Because we’re better together.”

And just that quick, he’s kissing me. He’s kissing me in that way that only Rick Savage kisses me, like he’s burning alive for me. And now I’m burning alive for him. It’s as if a match ignites and explodes between us. We’re all over each other and in a haze of lust and love, of want and need, and somehow, he’s no longer wearing his shirt and neither am I. I’m not wearing anything. I’m on the counter that had been behind me, and now he’s not wearing anything. What he is doing is pressing inside me, thick and hard, and oh so perfect. We’re in a wild frenzy and I’m lost in how delicious his big body is pressed to mine. How intense his handsome face is as he looks at me, as he loses himself in me and us. I’m lost in his hands on my body, his touch as savage as his name—all over me, on my breasts, my nipples. But in our intensity, the rush of our need is fast and hard, over too soon, the trembles and quakes of our bodies explosive and then exhaustive in the most bittersweet of ways.

I collapse into him, a butterfly on the wind, and he’s the wind, no part of me fighting where he carries me or what I feel for this man. No part of me protecting myself from him. Who am I kidding? I have no chance. Why do I want to try? “I wasn’t better without you,” I whisper into his neck, the sharp spice of man and cologne just another part of him that feels a part of me. 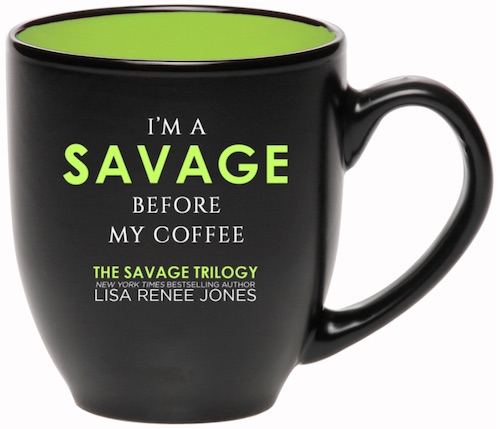 Lisa Renee Jones is giving away this super cool coffee mug to one lucky winner. Open internationally, enter for your chance to win below!

New York Times and USA Today bestselling author Lisa Renee Jones is the author of the highly acclaimed INSIDE OUT series. Suzanne Todd (producer of Alice in Wonderland) on the INSIDE OUT series: Lisa has created a beautiful, complicated, and sensual world that is filled with intrigue and suspense. Sara’s character is strong, flawed, complex, and sexy – a modern girl we all can identify with.

In addition to the success of Lisa’s INSIDE OUT series, she has published many successful titles. The TALL, DARK AND DEADLY series and THE SECRET LIFE OF AMY BENSEN series, both spent several months on a combination of the New York Times and USA Today bestselling lists. Lisa is presently working on a dark, edgy new series, Dirty Money, for St. Martin’s Press.

Prior to publishing Lisa owned multi-state staffing agency that was recognized many times by The Austin Business Journal and also praised by the Dallas Women’s Magazine. In 1998 Lisa was listed as the #7 growing women owned business in Entrepreneur Magazine. Find her here: http://lisareneejones.com/

Where Romance and Pop Culture Live Happily Ever After.
All Posts
PrevPreviousDaily Frolic: Harlequin Announces Inspirational Love Inspired Line
NextHot Priests and Healing: The Emotional Depth Behind A Popular TropeNext