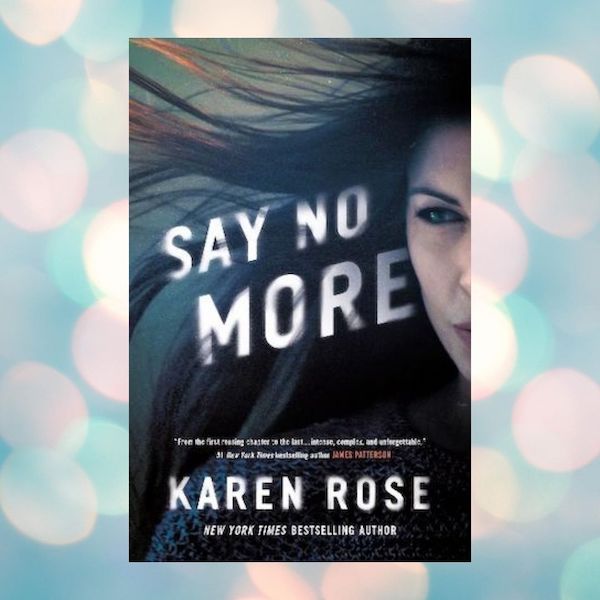 We are so excited to bring you an exclusive excerpt from Say No More by Karen Rose, out August 11th!

About Say No More:

Mercy Callahan thought she’d escaped the cult decades ago, but its long fingers are reaching out for her again in this electrifying novel in the Sacramento series by New York Times bestselling author Karen Rose.

Seventeen years ago. That was the last time Mercy Callahan saw Ephraim Burton, the leader of the twisted Eden cult where she was raised. But even though she escaped the abuse and terror, they continue to haunt her.

When her brother Gideon discovers new evidence of the cult’s–and their victims’–whereabouts, Mercy goes to Sacramento to reconnect with him. There, she meets Gideon’s closest friend–homicide detective Rafe Sokolov. From Rafe, she receives an offer she never knew she needed: to track down Ephraim and make him pay for everything.

But Ephraim, who had thought Mercy long dead, discovers she is in fact alive and that she is digging around for the cult’s secrets. And now he’ll do anything to take her back to Eden–dead or alive.

She was back in California. Back to Gideon. Back to Rafe. And back to the memories of Eden that seemed so much closer to the surface here.

Eden. As much as she dreaded having to face Gideon and Rafe again, just being in California had her nearly hyperventilating. Eden was here, somewhere. Somewhere north of Sacramento, way up in the mountains where monsters could hide and continue their abuse.

Monsters like Ephraim Burton and DJ Belmont. She shuddered. DJ had killed her mother, but it was Ephraim who’d terrified her to the depths of her soul. He still did. The memory of him, big and hulking, harsh hands that hit and hit, still had the power to reduce her to the traumatized girl she’d been. His one eye, intense and so cruel. His body that had . . . hurt her.

Say the word, Mercy. He raped you for an entire year. Until she’d nearly died. She would have died, had it not been for her mother’s sacrifice.

But Mama had sacrificed, enabling Mercy’s and Gideon’s escapes. Gideon had been searching for Eden ever since. He’d become a special agent with the FBI, to help people. To find Eden. To free the others who were still enslaved. Still afraid and hurting. While I ran away to hide from him, to hide from life. To hide from everything.  All the while refusing to help him find the monsters that had taken everything.

No more. Everything had changed, all because of Gideon and his passion for the truth. The FBI knew about Ephraim Burton now. They knew that he’d been Harry Franklin before robbing a bank had sent him into hiding. Had sent him to Eden. An FBI task force was looking for him.

If they found him, they’d arrest him for murder and sexual assault. So many victims. The FBI would want her to testify against him. She’d have to see him again. To look at the face that still haunted her nightmares.

The angry bees in her gut swarmed and she was abruptly glad she hadn’t had anything to eat on the plane. Ephraim Burton was out there. And so was DJ Belmont. Walking the earth as free men when her mother was dead. And I’ve been hiding all this time, afraid of my own shadow.

No more. Because she’d returned to do the right thing. “I may still be afraid,” she muttered quietly, “but I’m sure as hell not hiding anymore.”

She looked up, stared at her own reflection. She was pale and there were dark circles under her eyes. But her eyes were clear and she straightened her spine, suddenly refilled with purpose. You are not weak. You have survived. You are here. And you are not a little girl anymore, cowering in fear as he raped you. You’re a grown woman, in charge of your future.

She was here in Sacramento to make amends. To Gideon, to Rafe. But if she could make amends and destroy the men who’d tortured her and her mother and so many others at the same time?

That was an empowering thought. “You can do this,” she said to the woman in the mirror.

She would make amends. She would make the men who hurt her mother pay. One step, one breath at a time. I’m back, you sons of bitches.

Mercy gave a hard nod to her reflection. She knew what she had to do now. She wasn’t sure how to do it, but she wouldn’t have to do it alone.

She had Gideon. And Rafe. They might hate her, but they’d help her take Ephraim and DJ down, because they were both good men who did the right thing.

And it wasn’t like she’d have to face Ephraim today. The FBI was searching for him, but it wasn’t like he was going to pop up and surrender himself. So she had a little while to bolster herself.

She turned to the mirror to give her face a light coating of foundation and to apply her lipstick. At least she didn’t look like death warmed over, even if that was exactly how she felt.

Gathering her things, she squared her shoulders and walked from the ladies’ room.

Only to come to an abrupt halt, her breath seizing in her lungs. No.

It’s not possible. It’s a dream. A nightmare. It’s not real.

But then her nightmare smiled, a glass eye glinting as it reflected the overhead lights. “Hello, wife.”

Internationally bestselling author Karen Rose was born and raised in the Maryland suburbs of Washington, DC. She met her husband, Martin, on a blind date when they were seventeen and after they both graduated from the University of Maryland, (Karen with a degree in Chemical Engineering) they moved to Cincinnati, Ohio. Karen worked as an engineer for a large consumer goods company, earning two patents, but as Karen says, “scenes were roiling in my head and I couldn’t concentrate on my job so I started writing them down. I started out writing for fun, and soon found I was hooked.”
Her debut suspense novel, DON’T TELL, was released in July, 2003. Since then, she has published more than fifteen novels and two novellas. Her twenty-fourth novel, SAY NO MORE, will be released in 2020.
Karen’s books have appeared on the bestseller lists of the New York Times, USA Today, London’s Sunday Times, and Germany’s der Spiegel (#1), and the Irish Times, as well as lists in South Africa(#1) and Australia! To date, her books have been translated into more than twenty languages.
​​
A former high school teacher of chemistry and physics, Karen lives in Florida with her husband of more than thirty years. Find her here: http://karenrosebooks.com/
More
Share on facebook
Facebook
Share on twitter
Twitter
Share on pinterest
Pinterest
Share on reddit
Reddit
Share on email
Email

Where Romance and Pop Culture Live Happily Ever After.
All Posts
PrevPreviousFinola Austin and Elizabeth Kerri Mahon — Two Authorities on Scandalous Women in History Discuss Brontë’s Mistress
NextHi, My Name is Rebecca Zanetti and I’m Obsessed with the Show LuciferNext