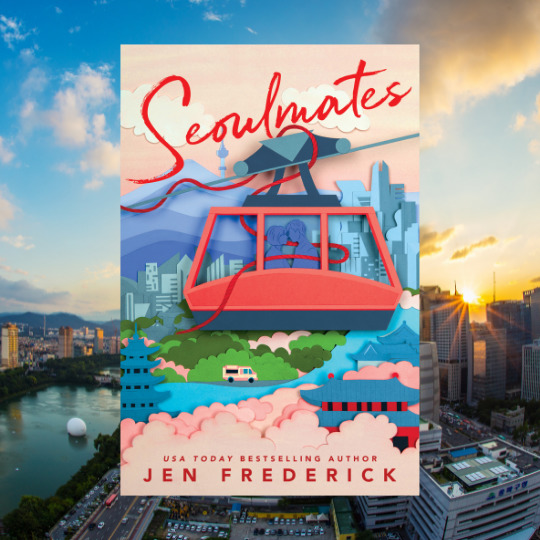 We are so excited to bring you this exclusive excerpt of Seoulmates by Jen Frederick! 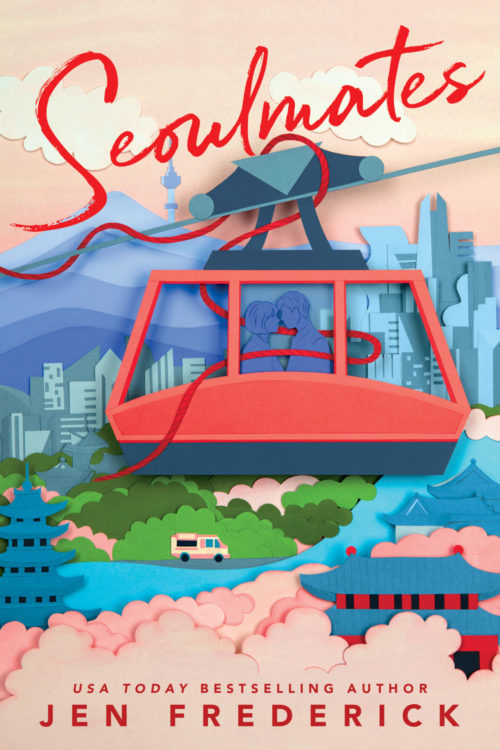 A Korean-American adoptee fights to be with the one she loves while coming to terms with her new identity in this enthralling romantic drama and sequel to Heart and Seoul by USA Today bestselling author Jen Frederick.

When Hara Wilson lands in Seoul to find her birth mother, she doesn’t plan on falling in love with the first man she lays eyes on, but Choi Yujun is irresistible. If his broad shoulders and dimples weren’t
enough, Choi Yujun is the most genuine, decent, gorgeous guy to exist. Too bad he’s also her stepbrother.

Fate brought her to the Choi doorstep but the gift of family comes with burdens. A job in her mother’s company has perks of endless company dinners and super resentful coworkers. A new country means
learning a new language which twenty-five year old Hara is finding to be a Herculean task. A forbidden love means having to choose between her birth family or Choi Yujun.

All Hara wanted was to find a place to belong in this world—but in order to have it all, she’ll have to risk it all.

“WHAT DO YOU THINK OF ME COOKING DINNER FOR YOUR mom?” It’s nearly midnight and Yujun has yawned three times since he answered the phone, but he refuses to hang up. Every night, we have a video call no matter how late it is. There’s a callus developing in the junction of my index and middle fingers where the charger cord rubs. I’m going to be useless tomorrow, but I fig- ure it doesn’t matter since my inbox will be empty.

I crinkle my nose. I hate being reminded that we share a mother. “Not our mom,” he corrects. “Eomeo-nim.” He uses the formal Korean version of the word “mother” as if that makes a difference. “I think she would like that. What are you making and why haven’t you cooked for me?”

“First, you’ve been away for six weeks, and second, there was no cooking allowed at Jules’s apartment. You grilled on the back porch and that was it.” When I first came to Seoul, I sublet a room in a house halfway up what always felt like a small mountain in the north part of the city. It was rented by three teachers and Jules, my flight attendant friend. We ordered in almost every night, and the few things that the girls cooked for themselves were ramyeon, a soup made with mandu—or what we would call potstickers—and tteokbokki, a spicy dish made with a rice cake shaped like a penne pasta noodle.

“You must not have had a dirty kitchen.” “A what?” I hadn’t heard of that before.

“It’s a second kitchen. Some are wet kitchens that are all tiled and you can hose down. Other people call it a dirty kitchen, but it’s where the real cooking is done, with meat and fish, and where the kimchi is made. Has no one given you a tour of the house?” He arches a well- groomed eyebrow.

“Wansu did, but I don’t remember a second kitchen. I feel like that’s something I wouldn’t forget.” I prop the phone against the pillow next to me. If I close my eyes and listen to his voice, I can pretend he’s here in bed, an arm’s length away.

“It’s tucked away. Only Mrs. Ji uses it.” He sighs and looks up at the ceiling. “I miss her cooking.” The sheets rustle as he rolls on his side.

The lower part of my body clenches at the sound. I’ve only slept with Yujun once, and my sweet memories of that night are mixed up with the bitter ones. That day, I’d found out that his beloved stepmother was my biological mother, who had abandoned me when I was a few weeks old. I ran away from her, that knowledge, the pain, fell into the Han River, and limped back to Jules’s apartment. Yujun was there, and I shut away the knowledge of how he was inextricably tied to Wansu and took what pleasure I could find in that moment. I needed the comfort and he provided it, with his hands and mouth and body.
I want a repeat where I’m not seeking to assuage any feeling other than pure lust.

“Does she always cook Western food?” Wansu and I eat to- gether frequently. Every morning, we down a terrible wheatgrass smoothie. It’s Wansu’s morning meal, and during that first awk- ward meeting at the table, as opposed to all the awkward meal- times that followed, she asked what I wanted to eat. Not to be a bother, I replied stupidly that I would have what she was having.

She gave me a dubious look and offered cereal. Bomi later told me that the staff had to go all the way to Itaewon to buy the box at an international store that catered to expats and diplomats. The following day, I adamantly declared my love for Wansu’s green drink. I thought it would be some Korean delicacy, but instead it’s a kale, pineapple, mango, and strawberry smoothie with a protein scoop full of all the essential vitamins a woman needs. Wansu was oddly excited to explain this to me, and for that reason, I have downed that disgusting thing every day for the past six weeks.

I do not feel any healthier today than I did when I started drinking the kale smoothie, but that may be because I’m consuming copious amounts of fried chicken, hotteok—a flattened and fried patty of dough with melted sugar in the center—batter-fried hot dogs sometimes topped with sugared apples, and fish cakes. And, of course, my beloved fried pork balls.
In the evenings, if I’m not out with Sangki discovering another food truck or hanging with Jules and Bomi, I’m at the walnut din- ner table with Wansu eating a meal made by the chef slash house- keeper, Mrs. Ji. The food served is fantastic, but it’s decidedly Western—pasta, grilled lemon chicken with a side of roasted potatoes, buttered scallops with asparagus spears, creamy mushroom soup with homemade croutons. I’m beginning to wonder if Wansu even owns chopsticks.

“No. Not really. She makes a great radish soybean paste stew. I love it in the winter, and her pork-potato jeon is also delicious. Jeon is a Korean pancake,” he starts to explain, but he doesn’t need to. I’m familiar with the savory fritter.

“I love jeon. Sangki and I went to a food truck at the Gwangjang Market last week. They made about ten different kinds. I liked the scallion ones the best.” They were thicker than most of the jeons I’ve seen in the basement department store food halls or in the restaurants.

“How was the spicy stew tonight?” “Very good. What did you have?”

He yawns and turns his face away from the camera to hide his tiredness. “The team ordered Singapore noodles. They were good, but I’m tired of Chinese food. I want to come home and eat Ko- rean food with you.”

A soft smile curves the corners of his lips up. “Do you miss me, Hara?”

“Because I sound needy and desperate.”

“I must sound the same, then, as I tell you this every night.” “No. It sounds cool when you say it.”

“Ah, but I am needy and desperate.” His voice drops. “It has been forty-five days since I’ve had you.”

A dozen, no, a hundred images fly through my mind. Yujun at the airport in the suit. Yujun waiting outside the Airbnb in jeans and a simple white shirt. Yujun in crisp wool slacks and a sunny yellow T-shirt rolled at the sleeves. Yujun in nothing but sweat and skin, his biceps flexing as he lowers his body down and inside me. I close my eyes as if that can shut down my imagination, but it only gets worse. In the darkness, with the sound of his breathing on the phone, it’s as if he’s here with me, stroking me, kissing me, loving me. I’m overwhelmed and don’t want him to see it. It’s too humiliating.

“I think I need to go,” I croak. “Big day tomorrow. Lots of work.” The excuses tumble out of me.

The smile turns slightly smug, but he only nods. “I miss you, aegiya.”

I don’t sleep well. Who could after that?

Excerpted from Seoulmates by Jen Frederick, published by Berkley, an imprint of Penguin Publishing Group, a division of Penguin Random House, LLC. Copyright © 2022

Jen Frederick is the USA Today bestselling author of Unspoken, part of the Woodlands series, and Sacked, part of the Gridiron series. She is also the author of the Charlotte Chronicles and has had several books on the Kindle Top 100 list. She lives in the Midwest with a husband who keeps track of life’s details while she’s writing, a daughter who understands when Mom disappears into her office for hours at a time, and a rambunctious dog who does neither. Email her at jensfrederick@gmail.com.

Where Romance and Pop Culture Live Happily Ever After.
All Posts
PrevPreviousWeekend Podcast Guide: Sweet Dreams
NextRing in the New Year with These Great Gay Romances by Jeff Adams and Will KnaussNext