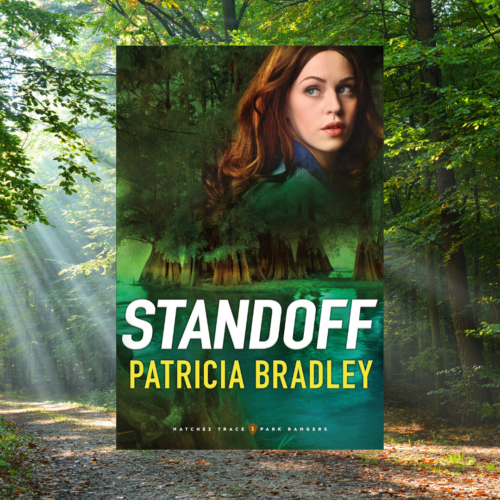 We are so excited to bring you this exclusive excerpt from Standoff by Patricia Bradley!

The Natchez Trace National Parkway stretches 444 miles from Nashville to Natchez, the oldest town on the Mississippi River. It’s the perfect road for a relaxed pleasure drive. Unfortunately for park ranger Luke Fereday, lately it’s being used to move drugs. Sent to Natchez to infiltrate the organization at the center of the drug ring, Luke arrives too late to a stakeout and discovers the body of his friend, park ranger John Danvers.

John’s daughter Brooke is determined to investigate her father’s murder, but things are more complicated than they first appear, and Brooke soon finds herself the target of a killer who will do anything to silence her. Luke will have his hands full keeping her safe. But who’s going to keep him safe when he realizes he’s falling–hard–for the daughter of the man he failed to save?

Award-winning author Patricia Bradley introduces you to a new series set in the sultry South that will have you wiping your brow and looking over your shoulder.

The baby’s due date was a couple of months away, just after her mom’s gallery showing of her work ended. They both turned as the doorbell rang. It couldn’t be Gary already, and besides, he would just honk. “I’ll get it,” Brooke said and hurried to open the front door.

“Jeremy?” she said, her stomach fluttering at the sight of one of Natchez’s most eligible bachelors. Had she forgotten a date?

He looked behind him then turned back to Brooke with laughter in his eyes. “I think so.”

Heat flushed her face, and it had more to do with the broad shoulders and lean body of the man on her doorstep than the temperature. “I wasn’t expecting you. I don’t have a lot of time, but do you want to come in?”

“Since it’s a little hot and humid out here, coming in would be good,” he teased. “And I apologize for dropping by without calling, but I was afraid you’d tell me you were busy.”

Brooke steeled herself against the subtle citrus fragrance of his cologne as he walked past her. She’d had exactly two dates with Jeremy Steele and hadn’t figured out why he was even interested in her. She was so not his type. The handsome widower tended to lean more toward blondes.

“Hello, Mrs. Danvers,” Jeremy said to her mother, who had followed her to the living room.

“How many times have I told you to call me Vivian?”

“I’ll try to remember that,” he said with a thousand-­watt smile.

“Good. A thirtysomething calling me Mrs. Danvers makes me feel old,” she replied. “And since I know you didn’t come to see me, I’ll go back to my painting.”

“Good to see you Vivian.” Then he turned to Brooke and glanced at her uniform. “Are you working tonight?”

“Sort of,” she said. “I was going to ride along with Dad on his patrol, but he cancelled and turned me over to another ranger. Why?”

“I know it’s last minute, but I was hoping you’d have time to join me at King’s Tavern,” he said. “I have a hankering for one of their flatbreads.”

Her mouth watered at the thought. Brooke hadn’t eaten since lunch, and she could do last minute, at least this time. But the question of why her kept bobbing to the surface. Ignoring it, she said, “That sounds good. I’ll text Gary to pick me up later.”

She grinned at him, tempted to describe the aging ranger as a hunk but instead settled for the truth. “He’s the ranger I’m replacing when he retires.”

Red crept into Jeremy’s face. “Oh, that guy. Are you even sworn in yet?”

“No, that’s next week. I talked my dad into letting me get a little early practice.” It helped having a father who was the district ranger, even if he wasn’t overjoyed about her becoming a law enforcement ranger. Then she looked down. “I need to change first.”

Maybe to him, but she was not about to go on a date wearing a National Park Service uniform and a Sig strapped to her waist. “Give me five minutes.”

After Brooke changed into a lavender sundress and slipped into sandals, she gave herself a brief once-­over. While the dress showed no cleavage, it accentuated curves the NPS uniform hid. She freed her hair from the ponytail and put the elastic holder in her purse. In this heat, she might have to put it up again.

Brooke checked her makeup. She rarely wore anything other than pink gloss. Thick lashes framed her eyes and the sun had deepened her olive skin to a nice tan. Brooke wasn’t sure where she got her darker complexion and hair since her mom and sister, and even her dad, were fair and blonde, but she wasn’t complaining.

Tonight she wanted something more and added a shimmering gloss to her lips. Then she took a deep breath and slowly blew it out. Didn’t do much good with her heart still thudding in her chest.

Why was Jeremy pursuing her? The women usually seen on his arm were ones who could mix and mingle with the rich and famous. Women who could further his career. Jeremy was a Mississippi state senator with his sights set on Washington like his daddy, while she was a National Park Service ranger who didn’t care one thing about leaving Natchez.

Her heart kicked into high gear. Had the M-­word just crossed her thoughts? Impossible. It wasn’t only that she wasn’t his type, he definitely wasn’t hers. She was a simple girl with a simple lifestyle—­nothing like the Steeles.

In the 1850s, half the millionaires in the United States lived in Natchez, and the Steeles were among them. A hundred and seventy years later, the family’s holdings had increased substantially, not to mention the Steele men had a long history of public service.

Jeremy’s dad was the retiring US senator and his son was poised to take his place in the next election. His photo appeared regularly in the Natchez Democrat, often with a beautiful woman on his arm. And never the same one.

She sighed. If they lived in England, he would be royalty, and she would be the commoner who ended up with a broken heart.

Brooke chided herself about being melodramatic and hurried to her mom’s studio. “Jeremy and I are grabbing something to eat,” she said.

Her mom laid her brush down. “What about your ride along?”

“I’ll catch up to Gary later,” she said.

When she rejoined Jeremy, his eyes widened, and he whistled. “Nice,” he said.

Jeremy Steele knew how to make a woman feel special. As they stepped out of the house, she immediately noticed the ten-­degree drop in temperature from when Jeremy first arrived and nodded at the thunderheads that had rolled in. “Guess that means we won’t leave the top down.”

“I think we can make it to the tavern before it starts.”

Ten minutes later Jeremy escorted her into King’s Tavern, where the original brick walls and dark wooden beams added to the mystique of the inn that had been rumored to have a ghost. The tantalizing aroma of steak drew her gaze to the open grill, but she had her heart set on one of their wood-­fired flatbreads.

“Inside or out?” Jeremy asked.

“The backyard, if you don’t think it’ll rain,” she said.

“If it does, we’ll simply come in.” He gave the waitress their drink order, sweet tea for both of them, and let her know where to find them. They had their choice of picnic tables and chose the one on the hill. Once they were seated, Jeremy reached across, taking her hand. His touch and the intensity in his brown eyes almost took her breath away. “I’m glad you came.”

“Me too,” Brooke said, trying not to sound breathy. The question worrying around in her head wouldn’t wait any longer. “Why me?”

“Why are you interested in dating me? We don’t travel in the same circles.”

“But we do. We’ve gone to church together since we were kids.”

“And you sit in your family’s pew clear across the sanctuary.”

His eyes twinkled. “We don’t have a family pew.”

She laughed. “I’d hate to be the one who sat in your mom’s seat some Sunday.”

“But I’m so different from the women you usually date.” There. She’d said it.

He lightly stroked the heel of her palm. “That’s what I like best. You’re real. I’m. not saying anything bad about anyone I’ve dated, but honestly, sometimes I think the aura of the Steele name is the attraction. That and Dad’s money.” Then Jeremy smiled, popping dimples in his cheeks. “But you were never like that. Even in high school you were never afraid to tell me like it was.”

Heat infused her cheeks. She’d been accused of that many times, usually by someone who didn’t want to hear the truth. “I’m working on not being so blunt,” she said. “I hope I never hurt your feelings.”

“I won’t say never,” he said with a wink, “but you never said anything that didn’t need saying.”

Okay, she’d been rude and hadn’t fallen all over him because of who he was. Before she could ask why again, the waitress approached with their drinks, and Brooke pulled her hand away from Jeremy’s, missing his touch immediately. Maybe she should let go of her questions and let their relationship play out.

Once the waitress left with their orders, Jeremy took her hand again. “I’ve looked a long time for the right person.”

His brown eyes held her gaze. He surely didn’t mean her. Did he? “What about Molly? I’d hate for her to get attached to me and then we stop seeing each other.”

“I don’t plan for that to happen. And Molly is already crazy about you.”

Brooke couldn’t keep from smiling. His six-­year-­old daughter was a sweetheart.

“How about if we take it slow?” he asked. “Get to know one another?”

Her phone dinged and she glanced at the screen. A text from Gary.

Patricia Bradley is the author of Justice Delayed, Justice Buried, Justice Betrayed,
and Justice Delivered, as well as the Logan Point series. Bradley won an Inspirational Reader’s Choice Award in Romantic Suspense, a Daphne du Maurier Award, and a Touched by Love Award, and she was a Carol Award finalist. She is cofounder of Aiming for Healthy Families, Inc., and she is a member of American Christian Fiction Writers and Sisters in Crime. Bradley makes her home in Mississippi. Learn more at www.ptbradley.com.