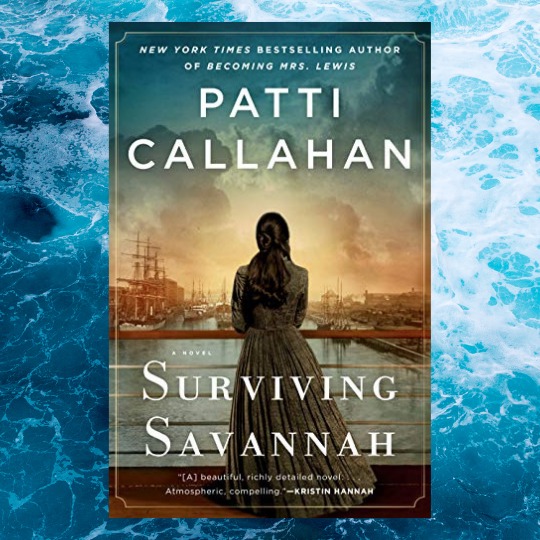 We are so excited to bring you this excerpt from Surviving Savannah by Patti Callahan! 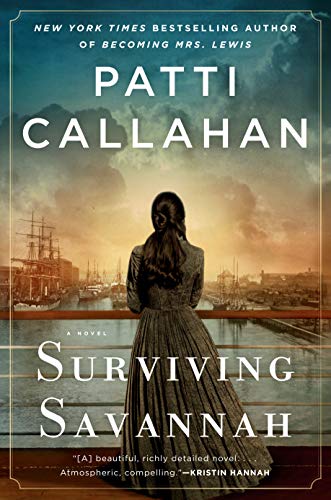 When Savannah history professor Everly Winthrop is asked to guest-curate a new museum collection focusing on artifacts recovered from the steamship Pulaski, she’s shocked. The ship sank after a boiler explosion in 1838, and the wreckage was just discovered, 180 years later. Everly can’t resist the opportunity to try to solve some of the mysteries and myths surrounding the devastating night of its sinking.

Everly’s research leads her to the astounding history of a family of eleven who boarded the Pulaski together, and the extraordinary stories of two women from this family: a known survivor, Augusta Longstreet, and her niece, Lilly Forsyth, who was never found, along with her child. These aristocratic women were part of Savannah’s society, but when the ship exploded, each was faced with difficult and heartbreaking decisions. This is a moving and powerful exploration of what women will do to endure in the face of tragedy, the role fate plays, and the myriad ways we survive the surviving.

The sway of the sea felt as sublime as the soft sheets she slept upon.

She rolled onto her side and stared at the boys in the candlelight. Then the flame flickered, beeswax dripping, and a sound, otherworldly, horrific—an explosion—crashed through the night. The silver candle‑ stick crashed to the floor. Augusta shot up from her bed. Her eardrums vibrated and the ship trembled. It wasn’t so much terror that swamped her as confusion.

Heat, as searing as if the sun had fallen onto the ship and was radiating through the hallways and under the doorframes, blew into the room like the breath of a beast. She stood frozen in fear. An eerie silence pervaded—the engine had stopped and the great wheels had stilled.

She glanced around to get her bearings. Their room contained three berths—two built in where she and Thomas slept, and a third rolling berth where Charles slumbered.

With a breath that tasted of smoke, she moved quickly, scrambling. She had no idea what was happening to the ship, but it wasn’t right. She grabbed Thomas and shook Charles. “Charles! Get up. The ship is in trouble. Something’s blown up or caught fire.”

He jolted upright. “Auntie?” “Something is terribly wrong.”

Darkness saturated the room, and the berth where Charles lay blocked the doorway exit. Augusta held Thomas, who was just waking, snuffling and confused. “Charles, move the berth so we can get out.”

Charles shoved at the bunk, using all his strength, his red hair aflame in the dark. “Auntie, it won’t move. It won’t. We’re trapped.” His voice climbed into a wail.

Augusta stood on top of the bunk, leaned toward the door. “Help us!” she screamed, hoping her voice would reach the captain’s office a mere twenty feet across the galley.

She then placed Thomas, bleary‑eyed and whining, on her berth, and with Charles they pushed again at the rolling bed, but it was jammed. Between them they didn’t own enough strength to move it. She turned to the window. Could they crawl out? She vividly imagined the sea filling their room and then their lungs. And with that she froze.

Augusta closed her eyes, drew the boys close, one on either side. “We are going to be brave and smart. We need to get out of this room.”

Imagine in your mind’s eye the ship you walked all day with Lilly; see your path out.

Above them stretched the promenade along the entire length of   the ship. Two front and back companionways led to the main deck. Charles, Thomas, and she slept in a stateroom in the midsection of the ship, given to them by the captain who said he never slept on board. The ladies’ cabin at the stern and the men’s beneath the ladies’. These facts  didn’t  so  much  come  to  her  one  at  a  time  but  in  images  and memories of the past day spent wandering.

Twenty feet across the hallway were two passages with closets that stored the china and glassware, and then the captain’s office. Behind the china room, two more staterooms opened on the east side of the ship where her brother, her sister‑in‑law and the remainder of the fam‑ ily were bunked. Most importantly, outside her stateroom a passage‑ way led to a double stairway where she would exit to the upper deck and promenade. That was the way they must go.

Charles set his feet wide as the boat tilted so steeply starboard that the dark line of the horizon visible through the window slipped lower. “I will save us, Auntie Augusta.” His fourteen‑year‑old voice, halfway between a man’s and a child’s, cracked.

She took a shaky breath, frightened of not taking another, feeling the pressure to gasp for air. The transom window above the doorway might be big enough to climb out if they could reach it, which they couldn’t. Maybe if she put Charles on her shoulders? With a heave she again shoved her weight against the berth, and prayed to the holy God whom she worshiped in the small church at Stonewall. Where was her brother? Her sister‑in‑law? Lilly and sweet baby Madeline? Had they already found their way out?

“God help us,” she whispered as she shoved once more against the berth.

With a groan, the ship careened to the port side, and the berth slid with the movement as the door flew open. The bunk’s hard edge crushed her toes as it rolled over, but she felt little, for now a means of escape presented itself.

The sounds that reached her terrified her more than the heat and tilting of the ship. China crashed and shattered in the closet across the hall. Screams from other passengers echoed as if from another world. Augusta grabbed a coat for each child, and they ran into the darkness using her mind’s eye to envision the passageways and the stairwells.

The four lifeboats; she’d seen them. She’d touched them. She knew where they were.

Patti Callahan is the New York Times and USA Today bestselling author of fifteen novels, including the (Historical Fiction),  BECOMING MRS. LEWIS—The Improbable Love Story of Joy Davidman and C.S. Lewis (writing as Patti Callahan).  In addition, she is the recipient of The Christy Award—A 2019 Winner “Book of the Year.” ; The Harper Lee Distinguished Writer of the Year for 2020 and the Alabama Library Association Book of the Year for 2019.

Where Romance and Pop Culture Live Happily Ever After.
All Posts
PrevPrevious5 Debut YA Romances to Check Out
NextThe Perfect Kiss: My Favorite Literary Kisses by Naima SimoneNext