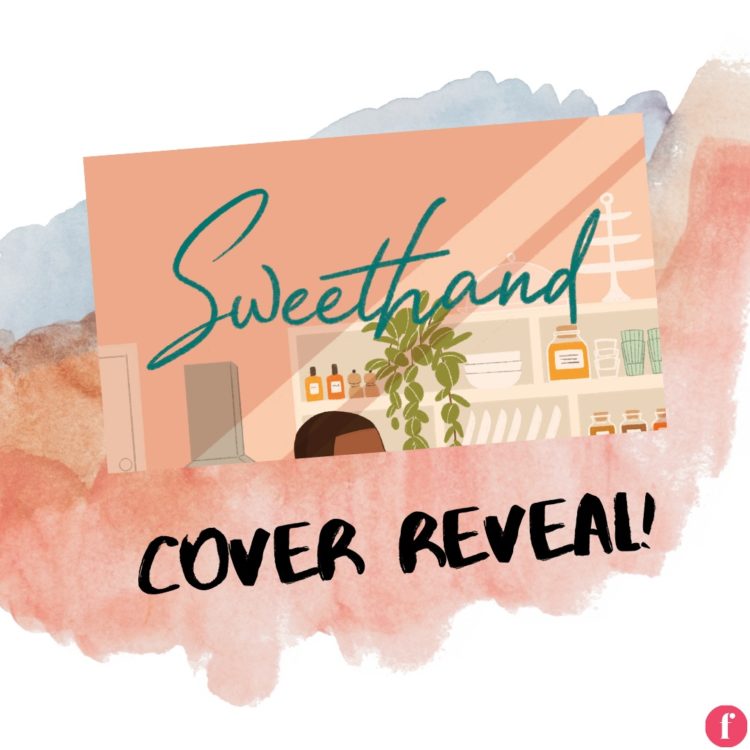 Hey my friends! This is such a special reveal for me because I love and adore Nat with all my heart. Nat is such a big part of the romance community — I’m so happy to see her releasing a romance next year and so grateful that she thought of me and Frolic to reveal the cover for it! When I first saw the cover, I instantly fell in love with it. I fully want a physical copy of Nat’s book so I can hold it in my arms forever. Sweethand by N.G. Peltier, the first book in the Island Bites series, releases March 30th, 2021. 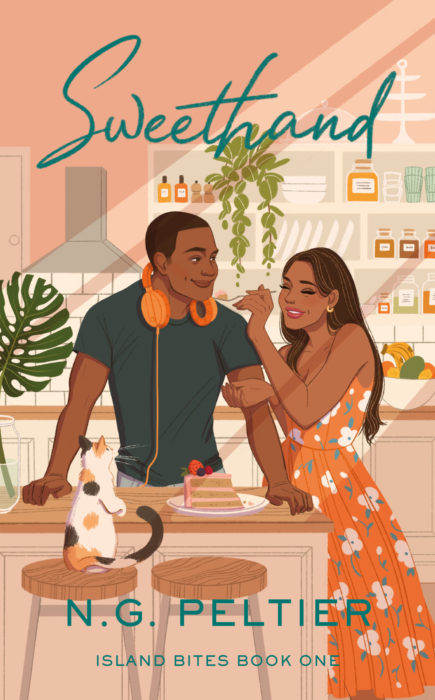 After a public meltdown over her breakup from her cheating musician boyfriend, Cherisse swore off guys in the music industry, and dating in general for a while, preferring to focus on growing her pastry chef business.

When Cherisse’s younger sister reveals she’s getting married in a few months, Cherisse hopes that will distract her mother enough to quit harassing her about finding a guy, settling down and having kids. But her mother’s matchmaking keeps intensifying.

Cherisse tries to humour her mother, hoping if she feigns interest in the eligible bachelors she keeps tossing her way, she’ll be off the hook, but things don’t quite go as planned. Turns out for the first time in ages, she and Keiran King, the most annoying man ever, are on the island at the same time. Avoiding him is impossible, especially when Keiran’s close friend is the one marrying her sister, and he’s the best man to her maid of honour.

Keiran doesn’t know what to make of Cherisse now. They’ve always butted heads. To him she’s always been a stuck-up brat who seeks attention, even while he secretly harbored a crush on her. Now with Cherisse’s sister marrying one of his good friends he can’t escape her as the wedding activities keep throwing them together.

When things turn heated after a rainy night of bedroom fun, they both have to figure out if they can survive the countdown to wedding day, without this turning into a recipe for disaster.

N.G. Peltier talks to us about the inspiration behind the cover:

This absolutely perfect cover is done by Leni Kauffman.

The cover is inspired by a scene in the book where Keiran and Cherisse are taste testing some of the goodies Cherisse is working on for the joint wedding shower that they have to plan. Keiran being a music producer is also there to work on the playlist for the event. Cherisse’s cat, Jello is always in the mix when baking is happening so I knew I wanted him on the cover. I also knew that I wanted Leni to do the cover because have you seen her work??? Stunning right?

So I described the scene to her, I sent some photo inspirations for my MCs and the kitchen, and how I wanted their expressions to be. Keiran is always smirking and teasing Cherisse — they really can’t stand each other in the beginning — so they smirk was a must! I told Leni I wanted a Caribbean/tropical vibe with bright colours and she just got it! Without me even specifying which colours I wanted she just nailed it!

The rough sketch was amazing but when I saw the cover in colour?? Yeah, had to fight back the tears because it exceeded all my expectations.

I even brought a small excerpt from the dessert taste testing scene. Hope you enjoy.

He had the glass in his hand, just twisting it around and around, observing her as she ate, before finally digging his spoon in. “Red velvet?” he asked.

“My fave.” He stuck the cake in his mouth and chewed. She watched his face closely, trying to gauge his reaction. Even if he hated it, didn’t mean she would scrap the entire idea. She’d just get another opinion. But she was curious to see his reaction.

As she watched him, “I Did It My Way” gave way to another Sinatra song, “The Way You Look Tonight.” She made a mental check mark next to that one. It should definitely be in the list. Her sister loved this song. She did too. They’d grown up with their father blasting Sinatra songs every Sunday afternoon.

“Jesus, this is…” Keiran’s tongue darted out to lick away a trace of whipped cream from his spoon. “Heaven on a spoon,” he finished.

Cherisse felt her face split into a wide grin. He scraped the bottom of the shot glass, doing another of those slow spoon licks that had Cherisse following every move his tongue made. His eyes caught hers, and Cherisse’s neck felt warm. Busted.

His smile was slow, sultry, as he dropped the spoon in the glass. “This definitely makes the dessert menu.”

Her head bobbed up and down. “Yup.” He needed to quit looking at her like that, as if she were the next thing he wanted to sample.

A devourer of words and books from a young age, she enjoys writing romance and creeping people out with the Caribbean folklore stories she grew up hearing.

A Trinidadian born and raised, she currently lives in Trinidad with her mountain of ideas and characters battling each other for whose story get told next.

She is represented by Lauren Abramo of Dystel, Goderich & Bourret LLC.

Hi, I'm Sil! 21. Mexico. she/her pronouns. I am the owner of the book blog, The Book Voyagers, where I blog and review books. Mainly, I focus on recommending and reviewing diverse books written by marginalized authors. You might also know me for doing book aesthetics and just shouting in capital letters about new books releasing. I'm a big fan of Adult Romance, but I also love Young Adult especially contemporary fiction and fantasy.
All Posts
PrevPreviousLOVE YA: Top Three YA Books for September 15
NextTen Romance Fans Share the First Romance Novel They ReadNext