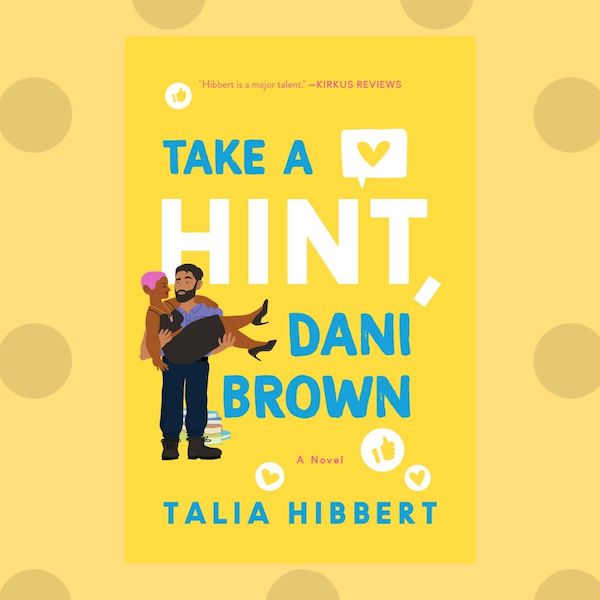 I have long been a fan of Talia Hibbert’s stories, so I am excited to bring to you an excerpt of Take a Hint, Dani Brown. If you’ve not read Talia’s work or this is the first time you’re hearing about Talia, do take a look at the excerpt below. It is sure to pique your interest. –Keira

About Take a Hint, Dani Brown:

Danika Brown knows what she wants: professional success, academic renown, and an occasional roll in the hay to relieve all that career-driven tension. But romance? Been there, done that, burned the T-shirt. Romantic partners, whatever their gender, are a distraction at best and a drain at worst. So Dani asks the universe for the perfect friend-with-benefits — someone who knows the score and knows their way around the bedroom.

When brooding security guard Zafir Ansari rescues Dani from a workplace fire drill gone wrong, it’s an obvious sign — PhD student Dani and ex-rugby player Zaf are destined to sleep together. But before she can explain that fact, a video of the heroic rescue goes viral. Now half the internet is shipping #DrRugbae — and Zaf is begging Dani to play along. Turns out, his sports charity for kids could really use the publicity. Lying to help children? Who on earth would refuse?

Dani’s plan is simple: fake a relationship in public, seduce Zaf behind the scenes. The trouble is, grumpy Zaf’s secretly a hopeless romantic — and he’s determined to corrupt Dani’s stone-cold realism. Before long, he’s tackling her fears into the dirt. But the former sports star has issues of his own, and the walls around his heart are as thick as his…um, thighs.

Suddenly, the easy lay Dani dreamed of is more complex than her thesis. Has her wish backfired? Is her focus being tested? Or is the universe just waiting for her to take a hint?

After what felt like an hour of yanking at the lift doors and making as much noise as possible, Dani was starting to worry just the teeniest, tiniest bit. It had occurred to her, approximately three minutes ago, that if the building had indeed been evacuated due to the presence of dangerous gas, she probably shouldn’t be breathing so deeply to power her yells for assistance. So she’d switched to slamming her hands against the doors while trying not to breathe at all, which seemed less effective but also less likely to speed up her imminent carbon monoxide poisoning. Now she was trying to figure out if she felt light-headed because the poisoning had begun, or because she wasn’t breathing.

It could possibly be both.

When she heard a voice shouting her name on the other side of the doors, she wondered for a moment if she was hallucinating as her body suffocated on ricin. Then she pulled herself together, patted the trio of gemstones hanging beneath her dress, and shouted back, “Hello?” Bang, bang, bang went her hands against the door, her left wrist aching and swollen because she’d wrenched it a little, back when she’d tried to open the lift. “HELLO?”

“Danika!” The voice was closer now, much closer, and almost familiar over the scream of the alarm.

No answer. But there was an odd, metallic wail, as if an iron elephant had been struck down, and then a high screech. She leapt back instinctively from the doors, and a second later, a tiny slice of light appeared right down the center. She caught sight of one dark eye and almost collapsed with relief.

“Hang on,” Zaf called through the gap, and then there was another wail and the door opened a little more. She saw his blunt fingertips at the edge of the chrome and realized he was actually succeeding in the endeavor at which she’d so tragically failed.

The alarm cut out abruptly, plunging them into silence. Dani clapped her hands over her ringing ears, as if the quiet was attacking them, before blushing at her own silliness and lowering her hands. Zaf, meanwhile, continued the superhuman and technically impossible — shouldn’t it be impossible? — feat of forcing open the lift. Unfortunately for him, these doors were the least of their issues. Dani had been trapped long enough that her death by poisonous gas was assured, and Zaf had likely doomed himself to the same fate by rescuing her. For some reason, she was intensely upset by that, and also felt a little bit like swooning.

Must be the formaldehyde inhalation.

Zaf gave one final heave, and the doors opened. She had an instant to register the sight of him: tall and broad and heavily built, his usual resting bitch face veering into furious territory, his warm, brown eyes gentle enough to negate the effect. For some reason, the contrast — the hard precision of his features versus that soft, liquid gaze — made her shiver. The light shone behind him like a halo, and he looked even larger than usual, and it hit Dani like a giant, cosmic fist that this whole nobly-rescuing-her-from-death situation was almost certainly a sign. As in, a sign. The timing and the drama were too significant to ignore. The universe might as well have pointed flashing neon arrows in the direction of Zaf’s delicious shoulders and screamed, This one, then, since you’re so impatient.

Dani stared. Really? Him? Are you certain? After all, sleeping with a friend hadn’t ended well for her last time. Plus, Zaf could be a teeny bit uptight, and then there was that excess of chivalry and the habit some men had of reading commitment into copulation… She opened her mouth to ask Zaf if he might, against all her previous instincts and assumptions, be up for no-strings shenanigans. Then she remembered that they were dying, which made the whole thing immaterial, and anyway, Zaf looked to be in a foul mood. His jaw, beneath its short, black beard, was tight, his lush mouth was a hard line, and his thick hair was an outrageous mess, perhaps because he’d just forced an elevator open with his bare hands.

Before she could comment on that strange, if impressive, behavior, he reached into the lift, dragged her out by the front of her dress, and plastered her against his massive chest. An almost silent “Alhamdulillah” rushed out of him on a sigh. Dani was just thinking, rather ungratefully, that he better not have creased her bodice, when he wrapped his arms so tightly around her that she could barely breathe.

Or maybe that was the mercury vapor.

“Why were you in the lift?” he demanded, his voice hard, the rest of him…not. She was quite certain he was nuzzling her head like a cat. “You don’t use the lift in emergency situations!”

“I know that,” she griped, her voice muffled against his chest. And what a lovely chest it was, like a big, meaty pillow. His belly was nice too, both soft and solid. She wondered if she could get away with grabbing his arse, since her brains were probably melting out of her nose as they spoke. “I was already in the lift when the alarm started. It just sort of…shut down.”

He growled. He actually growled—she felt the sound rumble through him. “This old building. The outer doors weren’t even closed.”

“The emergency button didn’t work,” she said, enjoying the tension in his body as he wrapped himself around her. “I was trapped in there for hours.”

“One hour, then,” she corrected.

“Danika, it’s been twelve minutes since the alarm started.”

“Oh.” Well, it had felt rather long. “Perhaps my grip on time wobbled a bit because of the strain.”

His growl came back. “I’m going to kill someone.”

“I think we’re going to be killed.”

“What?” Zaf pulled back a little, looking down at her, and she tried not to whine at the loss of contact. At least his hands were gripping her upper arms now, his thumbs sliding back and forth over her skin in a shower of sparkles. He’d never touched her before.

He really should touch her again, if possible. Soon. 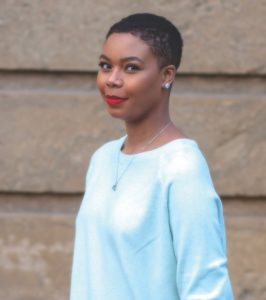 USA Today bestselling author Talia Hibbert is a Black British author who lives in a bedroom full of books. Supposedly, there is a world beyond that room, but she has yet to drum up enough interest to investigate. She writes sexy, diverse romance because she believes that people of marginalized identities need honest and positive representation. Her interests include beauty, junk food, and unnecessary sarcasm.

Where to Find Talia:

Keira Soleore writes for the International Examiner and Cogitations & Meditations. She enjoys connecting with readers on Twitter (@keirasoleore) and through her website (www.keirasoleore.com). Her interests include medieval manuscripts, philosophy, poetry, picture books, choir, sunshine and beaches. Keira is a pseudonym.
All Posts
PrevPreviousHi, My Name is Victoria Connelly and I’m Obsessed with English Castles
NextTrope Rec Tuesday: Romance Heroes Who Read Romance NovelsNext