Exclusive: The Borgia Confessions by Alyssa Palombo Except 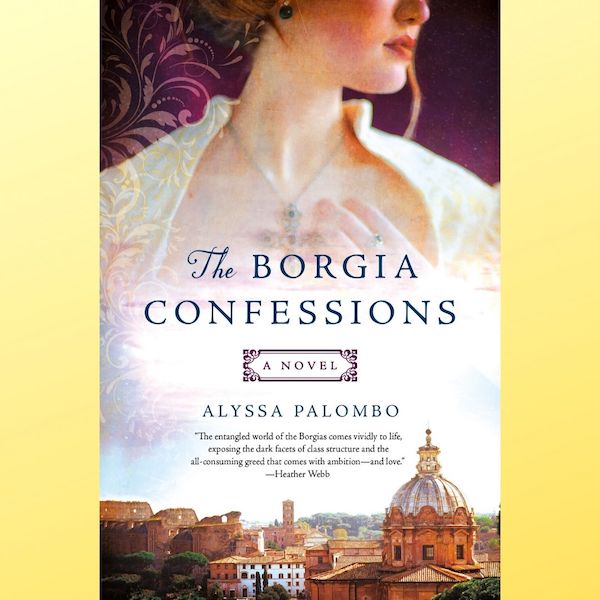 The Borgia Confessions is set in such an exciting historical time period. The Borgia family was rocked in shenanigans and scandals of the utmost secrecy and gossip through their history. Here is an exciting look at this new book by Alyssa Palombo. –Keira

About The Borgia Confessions:

During the sweltering Roman summer of 1492, Rodrigo Borgia has risen to power as pope. Rodrigo’s eldest son Cesare, forced to follow his father into the church and newly made the Archbishop of Valencia, chafes at his ecclesiastical role and fumes with jealousy and resentment at the way that his foolish brother has been chosen for the military greatness he desired.

Maddalena Moretti comes from the countryside, where she has seen how the whims of powerful men wreak havoc on the lives of ordinary people. But now, employed as a servant in the Vatican Palace, she cannot help but be entranced by Cesare Borgia’s handsome face and manner and finds her faith and conviction crumbling in her want of him.

As war rages and shifting alliances challenge the pope’s authority, Maddalena and Cesare’s lives grow inexplicably entwined. Maddalena becomes a keeper of dangerous Borgia secrets, and must decide if she is willing to be a pawn in the power games of the man she loves. And as jealousy and betrayal threaten to tear apart the Borgia family from within, Cesare is forced to reckon with his seemingly limitless ambition.

In sight of St. Peter’s Square, I had finally allowed relief to flood my blood when I heard hoofbeats coming up behind me. I turned to see a mounted rider pursuing me. “Stop!” he cried.

I screamed and ran faster, futile though I knew it was, and my legs felt like to give out. I could never outrun a man on horseback.

I stopped dead at the sound of my name and turned to face the mounted man. By then, he was almost upon me, and before I knew what was happening he had slowed his horse, seized me by the waist, and pulled me up into the saddle in front of him.

I screamed again, in panic and outrage. “Let me down! Who—” I broke off as I finally got a look at the man’s face. “You…Your Eminence!”

“Yes,” Cesare Borgia said, spurring his horse on. “What are you doing out on the streets, Maddalena? Surely you know it’s not safe—why, I saw you running as though you were being chased, and—”

“I was being chased by two French soldiers who accosted me,” I said. “I fought them off and ran, and then you came riding up behind me, and…” Suddenly all the fight went out of me, and I sagged against his lean body. Only then did I notice how good he felt against me, and just like that, all the thoughts I’d been trying to suppress—as well as, God forgive me, that sinful dream of over a year ago—came roaring back. I drew a sharp breath and quickly recited the Pater Noster in my head. And lead us not into temptation, but deliver us from evil…

He chuckled. “Fought them off, did you? Well done. But what in God’s name possessed you to leave the Castel Sant’ Angelo in the first place?”

“I was looking for someone,” I explained. “A…a friend.” If I wondered why I did not use the word betrothed with Cardinal Borgia, I did not stop to examine it too closely. “I have not heard from him and do not know if he is safe, and I was worried. I…decided to try to find him.”

By this time we were back at the Vatican, and Cardinal Borgia directed his horse into the stables. He swung down from the saddle and lifted me down after him. “That was brave of you,” he said. “Brave, but foolish. And did you find this friend?”

“I am sorry to hear that.” He led the horse into the stable be- fore drawing me toward the palace. “Come. We must both get back into the Castel. Luckily for you, I decided to ride out to try to find my mother.” He gave me that smile I had remembered so many times—too many times. “It seems I have saved you again.”

Before I realized what I was doing, I reached out and slapped him across the face.

I could not tell who was more shocked, him or me. No doubt I had not truly hurt him—I was a slight woman with no experience in violence, and he was a man and no doubt trained to protect himself. But the astonishment in his gaze was comical all the same.

I bit back the apology that leapt to my tongue, the horror at my actions that years in service to those above my station had ingrained in me. Instead I said, “I do not need you to save me, Your Eminence. I managed quite well before you found me. If you need to be a savior to someone, save the people of Rome.”

I expected his ire, even anger, in return; but as he had before when I had spoken boldly to him, he surprised me. He took my hand, raised it to his lips, and kissed it. “I shall do as you bid me, Maddalena, avenging angel, Madonna of Holy Vengeance,” he said, without so much as a trace of mockery. “I shall do the best I can.”

It was my turn to look shocked, to be rendered speechless.

“And I shall start with your friend,” he said. “What is his name?”

I shook my head, as if to clear it. “Federico Lucci,” I said. “A footman in the employ of His Holiness.”

A sardonic smile curled his lips. “Is this man your lover, then?”

“I did not mean to offend you,” he said, in earnest. “But it seems plain that this man is dear to you.”

He frowned slightly before his expression cleared, becoming neutral once more. “I see. Well, you have my word on this, Maddalena Moretti. I shall have my men find out where he is, and what has become of him, and I shall tell you. I swear it.”

Relief and warmth spread through me in equal measure. “I…I do not know how to thank you, Your Eminence.”

He took my hand and kissed it again, his lips warm against my skin. “It is as I told you before, Maddalena. A man will do a great deal to see that smile of yours. The smile of an angel of holy vengeance.”

I struggled to compose myself as he led me back into the Vatican Palace and to the secret tunnel.

An angel of holy vengeance, indeed. Perhaps my dream of him as such an angel had not been so far from the truth, after all. 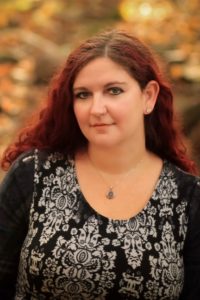 Alyssa Palombo is the author of The Violinist of Venice, The Most Beautiful Woman in Florence, and The Spellbook of Katrina Van Tassel. She is a recent graduate of Canisius College with degrees in English and creative writing. A passionate music lover, she is a classically trained musician as well as a big fan of heavy metal. When not writing, she can be found reading, hanging out with her friends, traveling, or planning for next Halloween. She lives in Buffalo, New York.

Where to Find Alyssa:

Keira Soleore writes for the International Examiner and Cogitations & Meditations. She enjoys connecting with readers on Twitter (@keirasoleore) and through her website (www.keirasoleore.com). Her interests include medieval manuscripts, philosophy, poetry, picture books, choir, sunshine and beaches. Keira is a pseudonym.
All Posts
PrevPreviousDaily Frolic: Romance Novels are Getting Love on “The Today Show!”
NextErin McLellan’s Recipe for Writing Valentine’s Day RomanceNext