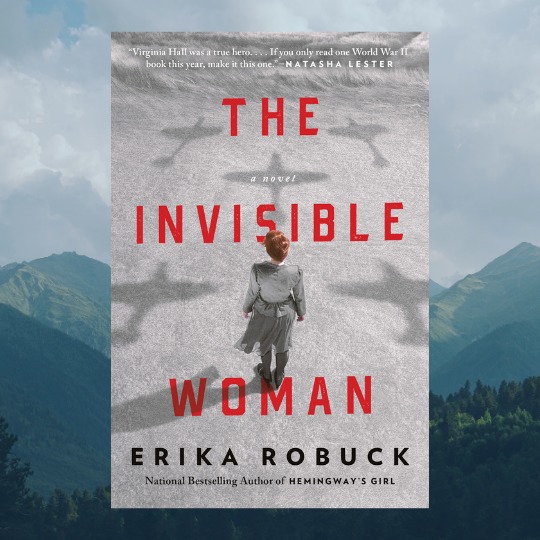 We are so excited to bring you this first-look excerpt at The Invisible Woman by Erika Robuck! First, a note from Erika Robuck herself:

“Virginia Hall, the subject of my forthcoming novel, was a clandestine operative who not only bested Nazis and hunted double agents during WWII, but who was also one of the first women in the CIA. In The Invisible Woman I not only dive in the psychology of one who would return for a second mission in Occupied France with a price on her head, but also explore the masks—the identities—we all wear as we move toward liberating who we are truly meant to be.

Hall was as elusive in death as she was in life, so research finds were particularly rewarding, and studying the ins and outs of spycraft was a thrill. In the excerpt, I give a sneak peek at Hall’s recruitment for the Special Operations Executive, also known as Churchill’s Ministry of Ungentlemanly Warfare. I hope you enjoy reading the banter as much as I enjoyed writing it.” 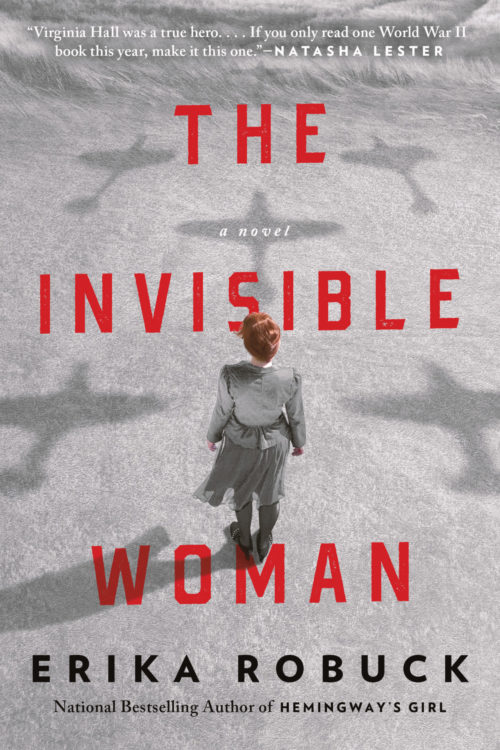 About The Invisible Woman:

In the depths of war, she would defy the odds to help liberate a nation…a gripping historical novel based on the remarkable true story of World War II heroine Virginia Hall, from the bestselling author of Hemingway’s Girl

France, March 1944. Virginia Hall wasn’t like the other young society women back home in Baltimore—she never wanted the debutante ball or silk gloves. Instead, she traded a safe life for adventure in Europe, and when her beloved second home is thrust into the dark days of war, she leaps in headfirst.

Once she’s recruited as an Allied spy, subverting the Nazis becomes her calling. But even the most cunning agent can be bested, and in wartime trusting the wrong person can prove fatal. Virginia is haunted every day by the betrayal that ravaged her first operation, and will do everything in her power to avenge the brave people she lost.

While her future is anything but certain, this time more than ever Virginia knows that failure is not an option. Especially when she discovers what—and whom—she’s truly protecting.

She can almost see the latticed London café windows filtering the January light, dust motes playing in the rare sunshine, that day in 1941 when Vera Atkins began recruiting her for the SOE.

Virginia recalls spotting Vera by her trademark perfectly arranged, glossy black hair, sitting in a corner booth, smoking, moving her gaze between the newspaper in front of her and the café. Her eyes lit up when she saw Virginia.

“If we were in France, you’d no longer be allowed to smoke,” Virginia said, sliding in the booth.

“And why is that?” Vera asked.

“Rations. They seem to think only men need tobacco.”

Vera had held out a pink container of Passing Clouds cigarettes to Virginia.

“No, thanks,” said Virginia. “I can’t be dependent upon anything if I ever want to get back to France.”

Vera stared at Virginia a moment before stubbing out her cigarette in the near-overflowing ashtray. She turned her attention to her handbag, where she searched a bit before finding a folding knife. It was rough and well used, military issue. Vera opened it and ran the blade along the pencil tip, slicing away wood and making a sharp point, curled shavings littering the tablecloth. A waiter joined them.

Virginia peeled her stare from the knife, glanced over the menu, and ordered the watercress soup.

“Feel free to order the roast and potatoes,” said Vera. “I’m treating, and I have extra ration coupons.”

“I can’t remember the last time I had meat. Roast and potatoes, it is.”

When the waiter left, Virginia leaned in. “How did you come by those?”

Vera gave a coy smile, folded up her knife, dropped it back in her purse, and began the newspaper crossword puzzle.

“I understand you volunteered for the French ambulance service at the beginning of the war, before coming to London after the fall of France,” Vera said. “Why did you volunteer?”

Virginia found it odd that Vera worked on a crossword while at lunch with her, asking personal questions, but sensed there was nothing the woman did without intent.

“In spite of my immaculate record at embassies across the world,” Virginia said, “the US rejected me for Foreign Service. France was happy to use me.”

“Were you rejected because of your leg?”

Virginia was taken aback that Vera knew. Virginia didn’t speak about her prosthetic with anyone, especially because it seemed to be such a roadblock to employment.

Vera lifted her eyes to Virginia’s. “You call your prosthetic leg Cuthbert?”

“Yes. It’s a joke. Saint Cuthbert is the patron of birds. Since I was hunting them when I shot off my foot, the name seemed fitting. And, to answer your question, yes, that’s ultimately why I was rejected.”

Vera turned her attention back to the puzzle.

“When you were stationed at Metz in the ambulance service,” Vera said, “did Cuthbert get in the way?”

Virginia never mentioned where she was stationed. Vera clearly already knew the answers to some of the questions she was asking. Still, Virginia decided to play along. She had nothing to lose.

“No, though he complains and tries to be troublesome, Cuthbert is stubbornly operative.”

Still not looking at her, Vera raised her eyebrows.

“What did your training for the French ambulance service entail,” Vera said.

“Good. I hear you’re a linguist. Which languages do you speak?”

If Vera was impressed, she didn’t show it.

“Tell me about war,” Vera continued. “What has surprised you?”

As Vera completed the puzzle, the waiter arrived, placing two steaming, gravy-soaked plates of roast and potatoes before them. Conversation ceased while they ate. Virginia savored bite after bite of the tender meat and made quick work of devouring the feast.

“You eat with the fork in your left hand, tines down,” said Vera.

“I picked up the habit in France. It’s more efficient than switching hands after the meat is cut with your right hand, wouldn’t you agree?”

The waiter returned and whispered in Vera’s ear. She reached in her handbag, placed the ration cards on the table—which he whisked away—and began erasing random letters on the crossword. When she finished, she dropped the pencil in her handbag.

“Forgive me,” Vera said. “I must go. I have enjoyed this thoroughly, and hope we meet again soon.”

Virginia hardly knew if she could say she enjoyed the experience, but it was interesting, and the food was a treat.

“Thank you,” said Virginia. “I haven’t eaten this well in months. I hope I can repay you someday.”

Vera nodded and left her. Virginia watched her go, noting the pointed glance she gave the waiter. What a strange woman, she thought. Vera wanted something from Virginia, and she didn’t know if she gave it. There were many heavy things in the air that seemed unsaid between them. They existed like missing notes in a symphony. Like missing letters.

From THE INVISIBLE WOMAN by Erika Robuck, published by Berkley, an imprint of The Penguin Group, a division of Penguin Random House, LLC.  Copyright © 2021 by Erika Robuck.

Erika Robuck is the national bestselling author of Hemingway’s Girl, Call Me Zelda, Fallen Beauty, The House of Hawthorne, and Receive Me Falling. She is also a contributor to the anthology Grand Central: Postwar Stories of Love and Reunion, and to the Writer’s Digest essay collection Author in Progress. #Hockeystrong, as E. Robuck, is her first satire. Her forthcoming novel, The Invisible Woman (Feb. 2021), is about real-life superwoman of WWII, Virginia Hall. In 2014, Robuck was named Annapolis’ Author of the Year, and she resides there with her husband and three sons.

Where Romance and Pop Culture Live Happily Ever After.
All Posts
PrevPreviousPerfect Pairings: Books and Vacations We Wish We Could Take Right Now by Lori Nelson Spielman
NextWhat to Read If You Loved The Queen’s Gambit by Teri WilsonNext