Exclusive: The Last Night in London by Karen White Excerpt 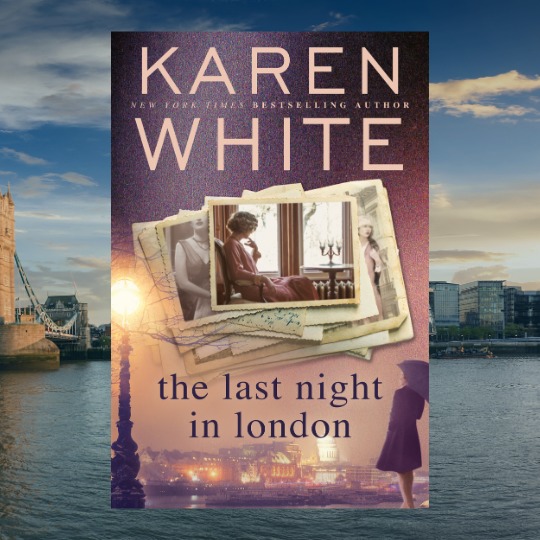 We are so excited to bring you this exclusive excerpt of The Last Night in London by Karen White! First, a note from Karen White herself.

“The following excerpt from my April 2021 release, The Last Night in London, takes places in the contemporary frame of the story.  Colin and Maddie met while at Oxford University but left an unresolved relationship when they parted ways.  Ten years later, they find themselves thrown together to unearth the mystery surrounding Colin’s Great-Uncle’s disappearance during World War Two.  This scene takes place about halfway through the novel, and illuminates Colin and Maddie’s backgrounds and their growing relationship that has suddenly become less confrontational.” 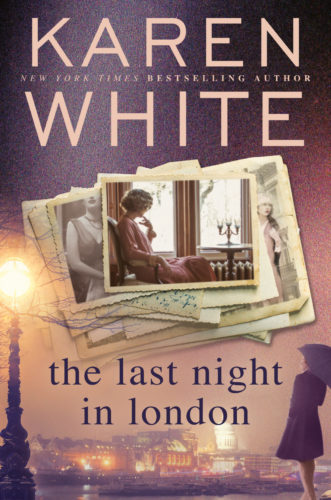 About The Last Night in London:

London, 1939. Beautiful and ambitious Eva Harlow and her American best friend, Precious Dubose, are trying to make their way as fashion models. When Eva falls in love with Graham St. John, an aristocrat and Royal Air Force pilot, she can’t believe her luck—she’s getting everything she ever wanted. Then the Blitz devastates her world, and Eva finds herself slipping into a web of intrigue, spies, and secrets. As Eva struggles to protect her friendship with Precious and everything she holds dear, all it takes is one unwary moment to change their lives forever…

London, 2019. American journalist Maddie Warner, whose life has been marked by the tragic loss of her mother, travels to London to interview Precious about her life in pre-WWII London. Maddie has been careful to close herself off to others, but in Precious she recognizes someone whose grief rivals her own—but unlike Maddie, Precious hasn’t allowed it to crush her.  Maddie finds herself drawn to both Precious and to Colin, her enigmatic surrogate nephew.  As Maddie gets closer to her, she begins to unravel Precious’s haunting past—a story of friendship, betrayal, and the unremembered acts of kindness and of love.

“What is it about all of our pasts that we’re so unwilling to confront?”

I looked up into the purpling sky, like a bruise on the day to show it had been lived and survived. It might have been the fading light or maybe the brandy made a confession seem less rash. “It’s odd, but when I think of my past, I see it as a younger version of myself. The me I can’t quite forgive for making so many mistakes.”

I felt him waiting and turned to meet his gaze. He said, “But, Madison, all of your mistakes have made you who you are. And from what I can see, you’re rather wonderful. Except for your inexplicable aversion to going home to a place you apparently love and a family who adores you.”

“You think I’m wonderful?” I hadn’t meant to say that, but his words had taken me by surprise.

“You have your moments.”

I looked away. Uncomfortable under his scrutiny, and confused by the rush of blood to my face, I breathed in deeply, the air redolent of spring and growing things and the soft fug of barnyard animals. “I do love the smell of a farm,” I said, eager to change the subject. “Pretty much in the same way I love the scent of the south Georgia swamps. I guess it’s like loving the sound of bagpipes—you’re either born with it or you’re not.”

“So you like the sound of bagpipes, do you?” Colin smiled reluctantly.

“I do. I can’t tell you where I’ve heard them, but I have often enough to know. There’s just something— don’t know—majestic about them. Haunting, almost. And you?”

“I’ve lived in Great Britain my entire life, so I’ve heard my share of bagpipes. And yes, I do enjoy them. I don’t believe one is allowed to be British and not at least give a show of liking it.”

The distant sound of a cow lowing rolled over the hills, making me nostalgic for something I wasn’t aware I was missing. “How could you ever leave such a place?”

When he didn’t answer, I looked up to find him watching me closely. “Because I know it’s always here. It’s where my childhood memories live, good and bad all mixed together.” A shadow passed behind his eyes, the kind I saw behind my own. He looked away, as if aware he’d given away something he hadn’t been ready to share. Turning to me again, he added, “But that’s what makes it home.”

I stared at him in the gathering dusk, feeling the tiny night insects brush against my cheeks. “Home is a place that lives in one’s heart, waiting with open arms to be rediscovered.”

He tilted his head slightly. “What incredibly intelligent person said that?”

I smiled. “My aunt Cassie. She’s usually right about most things.”

“She’s certainly right about that.”

I thought about what he’d just said, about home being a mixture of good and bad, and remembered the photograph of the boy who wasn’t Colin. “The photograph on your desk— the one of your parents with a little boy who looks like you. But it’s not you.” I let the unasked question float in the night air, unseen, its weight heavy between us.

Colin regarded me in silence for a long moment before turning away. Looking up, he pointed to the first stars appearing in the ceiling of sky above us. “In the winter, Gemini and Orion are visible. I’ve spent many a frigid evening with my telescope on this very spot.”

I followed his gaze to the pinpricks of light above us, the brandy and the wide–open sky making me dizzy. “When I was little, I was afraid of the dark, so my mama told me that the stars were little cracks in God’s curtains he’d use to keep an eye on us at night. After that, I wasn’t afraid anymore.”

“I come from a long line of intelligent women. If I didn’t look exactly like my aunt Cassie, I would think I was adopted.”

I looked at him in surprise. “About what— being adopted?”

He smiled, his teeth bright in the gathering darkness. “About going barefoot. I rather like it.”

I looked out over the fields. The vanishing sun had begun to tuck the hills into shadow blankets for the night, the light loosening its hold on the day and shifting from gold to purple. “It’s beautiful,” I whispered, not wanting to disturb the silence.

“It’s not the first sunset we’ve watched together.” Colin said close to my ear, and I realized he’d moved to stand next to me.

“It’s not?” I turned my face, his own near enough to touch.

“At university. Arabella arranged for a group of us to view the sunset from Headington Hill Hall, and you and I were the only two who showed up.”

“I’m not sure I remember,” I said, although that wasn’t completely true. I didn’t remember the scenery, but I did remember him standing next to me, carrying my camera bag.

I looked at him, recalling it clearly now. “No. You were the one who tried to kiss me.”

And before I could register that he was smiling, Colin leaned toward me and pressed his lips against mine.

From THE LAST NIGHT IN LONDON by Karen White, published by Berkley, an imprint of The Penguin Group, a division of Penguin Random House, LLC.  Copyright © 2021 by Karen White

Karen White is the New York Times bestselling author of 27 books, including the Tradd Street series, Dreams of Falling, The Night the Lights Went Out, Flight Patterns, The Sound of Glass, A Long Time Gone, and The Time Between. She is the coauthor of All the Ways We Said Goodbye, The Glass Ocean and The Forgotten Room with New York Times bestselling authors Beatriz Williams and Lauren Willig. She grew up in London but now lives with her husband near Atlanta, Georgia.

Where Romance and Pop Culture Live Happily Ever After.
All Posts
PrevPreviousExclusive: Christmas on Lover’s Lane by Teri Wilson Chapter One
NextThe 19 Most Anticipated YA Books of 2021Next