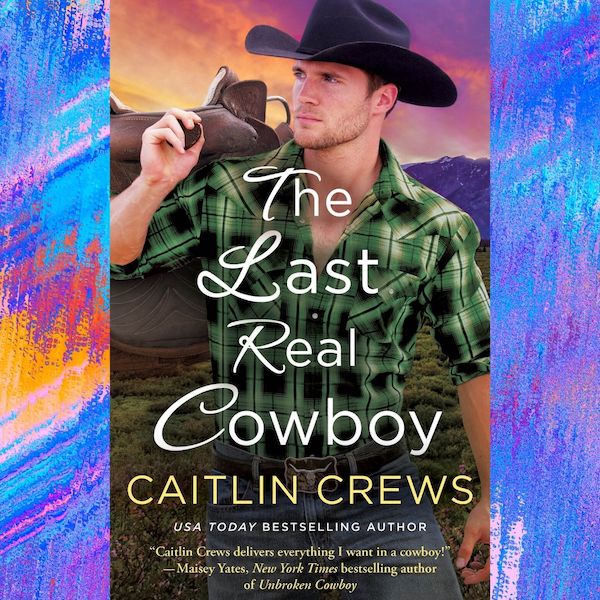 I have known Caitlin Crews for many years now, when she was writing as Megan Crane before. And through the years, I have read many books by her across the various genres she writes and come away impressed at how versatile a writer she is and how good she is. So I am excited to bring you an excerpt of her latest book, The Last Real Cowboy, out January 28th.  –Keira

About The Last Real Cowboy:

Perennial good girl Amanda Kittredge knows that her longtime crush on Brady Everett was never really supposed to go anywhere. But when Brady comes home to Cold River during Amanda’s first attempt at independence, well, who better to teach her about rebellion than her older brother’s bad-boy best friend?

Brady’s plans did not include being forced to work the family homestead for a year, and yet, here he is. And, to make matters worse, his best friend’s innocent little sister is making a menace of herself in the most grown-up, tempting ways. When Amanda begs Brady to teach her about men, he knows he should refuse. But could Brady’s greatest temptation be his salvation?

Brady wasn’t domestic. He wasn’t much into bliss either. But there was a particular kind of temporary happiness he was only too happy to indulge in, and he’d had the early morning ranch work hangovers to prove it.

Ty had once claimed that Gray wanted to be a country song, but he’d meant one of the old-school ones about honor and steadfastness and the cowboy way. Brady liked to think that in certain parts of Cold River, like the Coyote late at night, he was the other staple of the country genre. The kind where mamas were warned against him. Songs about women and whiskey and a whole lot of sin.

He was more than ready to get his own sin on when he walked inside the Coyote and took a moment to let his eyes adjust to the dim lighting, carefully calculated to make sure bad decisions had a place to hide. He expected the rowdy pack of bikers clustered around the pool table. He wasn’t surprised to see the same set of long-faced locals bellied up to the bar—there for the whiskey, not the company. And it wouldn’t be the Coyote without the shouting over the music, the too-intense laughter, and the dark booths filled with disreputable types tossing back alcohol like they were in a competition.

What Brady was not expecting was little Amanda Kittredge.

Behind the scarred, sticky bar and framed by all that classy, flashing neon.

“What the hell are you doing here?” he barked, scowling over the bar at her.

She stared right back. “What does it look like I’m doing?”

“It looks like you’re tending bar here, which is impossible. Obviously.”

The look she leveled at him then was not friendly. Worse, she did something with her body, shifted it somehow, to put her hands on her hips. And it was suddenly terrifyingly hard to remember that she was Riley Kittredge’s kid sister.

Because little Amanda Kittredge was not dressed for church. She was dressed the way the female bartenders here were always dressed, but she was little Amanda Kittredge, for God’s sake. Her hair was in a high ponytail that was too thick, too long, and too much like honey. She was wearing a whole lot of makeup that did things to her eyes, which he had not until this moment known or cared were a hazel that looked gold, somehow.

He told himself she looked like a kid playing dress up, but only if she was dressing up as a hot barmaid. She had on skintight jeans tucked into cowboy boots that made him feel like a pervert. And she was wearing a scandalously tight tank top that clung to her body and made a meal of her–

He was not looking at her chest. He was not.

Though it was possible he was having a heart attack. “Does that mean you don’t want to order a drink?” she asked, an edge to her usually sweet voice.

The whole tank top situation did not resolve itself. And no matter how many times he chanted little Amanda Kittredge, it didn’t help.

Because for a minute there, he didn’t see little Amanda the way he always had. Always underfoot, her hair in braids and a sunburned nose, climbing on and off the back of those horses her family bred. He didn’t see the skinned knees or the dirty jeans that had marked her as a horse girl. Horse girls were a particular kind of tomboy, indistinguishable from one another in skinny packs, who hung around horses and related to them better than people.

For a moment, all he saw was a full-grown woman who filled out her tank top a little too well. And her hair was too blond, with just enough falling down here and there to make a man’s fingers itch to get in there and pull out the rest.

He tried to slam that door closed. On his own face, if necessary. He tried to lock it up and pretend it hadn’t happened.

His body objected, so he ignored that too. “Whiskey,” he croaked out.

Then the horror continued, because when she wheeled around to get him his drink, he got a good look at her long, lean legs packed into tight denim and that curvy–

Brady didn’t actually punch himself in the face, to get a jump on what Riley and his brothers would do if they ever suspected Brady’s thoughts had strayed in this direction. He just thought about it. A lot.

Pull it together, Everett, he ordered himself.

And when little Amanda Kittredge turned back around and slid him his drink, he threw some bills on the bar, managed a nod, and then got the hell away from her before he disgraced himself further. He didn’t usually like to venture back into the questionable booths on the other side of the pool table, all of them filled with drama of one sort or another, but he obviously couldn’t stay at the bar. Or near the bar.

He sat by himself, scowled to discourage any social overtures, even though that was why he’d come here, and was nursing his whiskey straight on toward philosophical.

Until the door swung open and three of Amanda’s brothers walked in.

USA Today bestselling, RITA-nominated, and critically-acclaimed author Caitlin Crews has written over one hundred books, including Harlequin Presents, Harlequin Dare, and Cold River cowboys. She’s won fans with the romance, women’s fiction, chick lit, and work-for-hire young adult novels she’s written as Megan Crane (including the futuristic, dystopian Viking romance Edge series). These days, her focus is on contemporary romance in all its forms, from small town heat to international glamor, cowboys to bikers to military men, and beyond. She’s taught creative writing classes in places like UCLA Extension’s prestigious Writers’ Program, given assorted workshops on the writing process, and attempted to make use of the MA and PhD in English Literature she received from the University of York in York, England. She currently lives in the Pacific Northwest with her husband, who draws comics and animation storyboards, and their menagerie of ridiculous animals.

Where to Find Caitlin:

Where Romance and Pop Culture Live Happily Ever After.
All Posts
PrevPreviousFive Detective Shows You Need to Check Out
NextDon’t Be Afraid of the Dark: How I Wrote Outside My Comfort ZoneNext