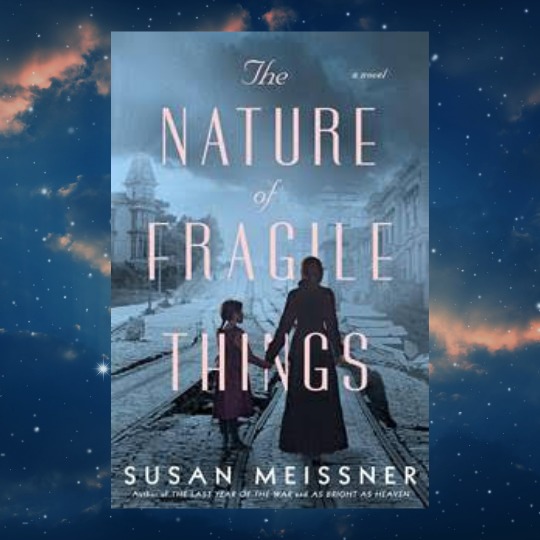 We are so excited to bring you this first look at The Nature of Fragile Things by Susan Meissner! But first, a note from Susan herself:

“Into the 1906 backdrop of San Francisco at a time of great upheaval and then rebirth, I’ve placed an Irish immigrant so desperate to escape New York that she agrees to marry a San Francisco widower – a mail-order bride style – and become instant mother to his five-year-old daughter. Here in this scene from THE NATURE OF FRAGILE THINGS I begin to lay the groundwork for will happen when everything in Sophie’s carefully crafted world gets shaken up, torn apart, and laid bare. She will either succumb to these forces greater than herself or she’ll find a way to outsmart, out-play, outlast her greatest adversary, which, by the way, is not the massive earthquake soon to come. Enjoy!” 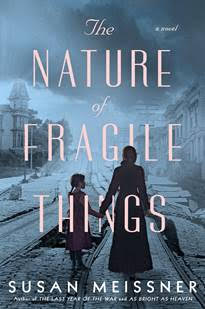 About The Nature of Fragile Things:

The year is 1906, and Sophie Whelan is a poor Irish immigrant living alone in the tenements of New York. In search of a better life than the one she has found in America, Sophie answers a newspaper advertisement for a mail order bride and agrees to move across the country to San Francisco to marry a man she hardly knows.

At first, Sophie is delighted to become a wife and mother, and she is dazzled by her new husband, Martin Hocking, a handsome young businessman and recent widower. After a whirlwind marriage, Sophie is introduced to young Kat, Martin’s little girl who hardly speaks. Sophie and Kat spend long hours together and form a special bond while Martin is traveling for business.

As time goes on, Sophie begins to grow wary of Martin Hocking—it seems that the “business” he works for may not exist, and he takes no interest in Sophie or Kat during his time at home. Sophie gets the feeling that something is not quite right.

Hours before the Great Earthquake strikes, a knock on the front door sets in motion an unsettling chain of events that rocks Sophie’s world and ties her to two women forever. With the life she built in San Francisco in shambles, and Martin’s dark secrets revealed, Sophie and Kat set out to rebuild and recover with the help of two strong women who become their lifeline.

Meissner’s compelling tale of strength and survival displays just how quickly tragedy can strike—and the incredible resilience we demonstrate in response.  Perfect for fans of Before We Were Yours and Sold on a Monday, THE NATURE OF FRAGILE THINGS is sure to tug at the heartstrings.

When the hall clock strikes eight, Martin says it is time for Kat to go to bed.

“I’ll start bringing up the trunks and bags,” he says, and he starts with Kat’s things, taking them to the first room off the second-floor landing. She and I follow him. The child enters the room almost like a sleepwalker, slow and uncertain.

Kat hesitates before nodding a wordless consent. Martin leaves to attend to the rest of the luggage.

The room had been the bedroom of the doctor’s sons; this is obvious by the matching bedcovers adorned with a pattern of toy soldiers and the two rocking horses in the far corner. I am going to have to do something with this room. No five-year-old girl would be at home in it. I help Kat with her buttons and getting her into a nightgown, which also seems tight and short. The child needs new clothes; she has grown since her mother’s illness and death, and Martin perhaps has not noticed.

“I think we need to get a few new frocks for you.” I hang the dress in the closet as well as the half dozen other dresses that are in her trunk—all the same too-small size. At the bottom of the trunk is a photograph in an oval frame of a beautiful woman with golden hair and fair skin, and whose nose is the same shape as Kat’s.

“Is this your mother?” I pick up the frame to look more closely at the image and then glance at Kat, who is sitting on one of the beds, watching me.

The child nods and a veil of sadness seems to fall across her face. Oh, how I want this child to talk to me.

“I know what it is like to miss someone you love.” I come to Kat’s bedside still holding the frame.

“It’s the worst ache in the world. My da had an accident some years back and went to heaven, too. Just like your mother. I miss my father very much.”

Kat is still looking at me, but the look of sadness has merged with one of slight interest.

“Perhaps you want to sleep with her photograph under your pillow? It will seem like you’re resting your head in her lap. Would you like to do that?”

The child nods, climbs into bed, and lies back on the pillow. I slide the frame underneath.

“Do you say prayers at night?” I ask as I tuck the quilts up under Kat’s chin. It is chilly in the room despite the gas fire throwing an orange glow around the room. The child shakes her head.

“How about if I say a little one for both of us. Will that be all right?”

Kat blinks and says nothing.

“My mam used to say this one with me. Close your eyes, now.”

I close my eyes, too, and then speak the memorized Anglican prayer from a thousand bedtimes in Donaghadee. “Lord, we beseech thee mercifully to receive the prayers of thy people which call upon thee; and grant that we may both perceive and know what things we ought to do, and also may have grace and power faithfully to fulfill the same; through Jesus Christ our Lord. Amen.”

When I open my eyes, I can see that Kat’s eyes are already open. She is staring at me, wide-eyed, in what nearly looks like wonder. Unexplainable tears are pricking at my eyes.

“Good night.” I kiss the child’s forehead and rise from the bed quickly. When I reach to turn out the light, I see Martin standing in the doorway with his arms folded comfortably across his chest as he leans against the frame. He’d been watching.

“Good night, Kat,” he says as I move past him, and he pulls the door closed.

“Should we not leave the door cracked a little?” I ask. “Might she be afraid of the dark in a new place?”

We head back downstairs. The foyer is now empty of travel bags and trunks. In the sitting room we retake our places, my new husband and I—Martin in an armchair and me across from him on the sofa closest to the fireplace.

“Watching you with Kat I would’ve guessed you’ve been a mother before,” he says, in an almost complimentary tone. It pierces me nonetheless.

“I helped my mam mind neighborhood children, like I said earlier.”

We are quiet for a moment.

“Kat has outgrown her clothes,” I tell him.

“We’ll buy her some new things tomorrow.” He glances at the worn shirtwaist and skirt I’m wearing. “I take it you need new clothes, too.”

A few more seconds of silence.

“We’ve a lot to take care of tomorrow. We should turn in.” He reaches for the gas key at the side of the fireplace and turns off the flame. The coziness of the room fades a bit.

We ascend the stairs. On the second floor, the door is open to the bedroom where my bags are; I can see them by the bedstead. Everything in the room that is visible from where I stand on the landing is cast in a peach radiance from the gas fire that has been turned on to chase away the chill.

I turn to Martin.

“Good night,” he says, without any hint at all in his voice that he is displeased with my one condition to marrying him. He’d wanted a façade of a marriage, and that was fine with me. I know what that word means: façade. It’s in my da’s word book. It’s how you describe something that appears to be one thing from a distance but is something else when you look closely. An illusion is what Martin said he wanted and I’d replied I would see to it that he had it, which is why I asked if we might keep separate beds until we developed at least a small degree of affection one for the other. He had—surprisingly—agreed.

I wish Martin a good night, too. And then I walk to the bedroom next to Kat’s, and he to the one across from it.

He doesn’t look back at me, not once.

Susan Meissner is a former managing editor of a weekly newspaper, and an award-winning columnist. She is the award-winning author of The Last Year of the War, As Bright as Heaven, A Bridge Across the Ocean, Secrets of a Charmed Life, A Fall of Marigolds, and Stars over Sunset Boulevard, among other novels.

1 thought on “Exclusive: The Nature of Fragile Things by Susan Meissner First Look”

Where Romance and Pop Culture Live Happily Ever After.
All Posts
PrevPreviousYA Books For When You Want To Feel Like You’re A Part of a Fairy Tale
NextWhy ‘You Had Me at Hola’ by Alexis Daria is A Big Hug to the Latinx CommunityNext