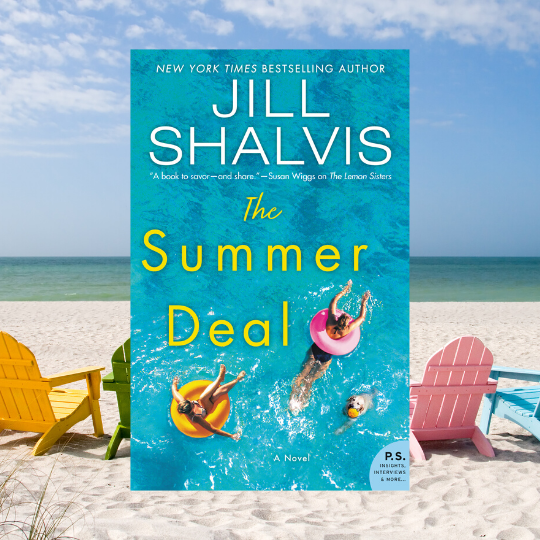 The Summer Deal from Jill Shalvis’ very popular Wildstone series is the perfect book to accompany you to the beach. Shalvis has made a name for herself writing small-town stories about friendship, love and family.

About The Summer Deal

Brynn Turner desperately wishes she had it together, but her personal life is like a ping-pong match that’s left her scared and hurt after so many attempts to get it right. In search of a place to lick her wounds and get a fresh start, she heads back home to Wildstone.

And then there’s Kinsey Davis, who after battling serious health issues her entire twenty-nine years of life, is tired of hoping for…well, anything. She’s fierce and tough, and she’s keeping more than one bombshell of a secret from Brynn — her long-time frenemy.

But then Brynn runs into Kinsey’s best friend, Eli, renewing her childhood crush. The good news: he’s still easy-going and funny and sexy as hell. When he gets her to agree to a summer-time deal to trust him to do right by her no matter what, she never dreams it’ll result in finding a piece of herself she didn’t even know was missing. She could have real connections, possibly love, and a future — if she could only learn to let go of the past.

As the long days of summer wind down, the three of them must discover if forgiveness is enough to grasp the unconditional love that’s right in front of them.

She was clutching the bag the nurse had provided for her to stow her personal belongings. Everything was pretty blurry, but even she could see that she was indeed very pale and her light-brown eyes seemed huge in her face. Embarrassment and humiliation did that to a person.

A freaking panic attack…Gah. She now needed a chocolate bar more than she needed her next breath, and considering she’d almost died from lack of oxygen due to panic, that was saying something.

A tall, leanly muscled guy stood in front of the machine, hands on either side of it as he gave the thing a hard shake.

A candy bar shook loose and he caught it, shoving it into one of his cargo pants pockets.

Pockets that looked already quite full.

She couldn’t see well enough to know which kind of candy bar he got, but it didn’t matter, because she liked all the candy bars in all the land. “Hey,” she said. “Save some for the paying customers.”

He turned to face her, his brown, wavy hair falling into his eyes, and…something made her fumble around in her plastic bag for her glasses. Self-preservation, maybe, because her instincts were screaming. Clearly not a common occurrence for her, or she wouldn’t always be able to detonate her life so thoroughly. When she got her glasses on, the world came into focus again and she breathed a short-lived sigh of relief.

Short-lived because though she hadn’t seen Eli Thomas since they were both fifteen, she did indeed know him.

“I did put money into the machine.” His expression was tight, as if he was highly stressed. And given where they were, in the hallway to the waiting room for both the ER and surgery, he in all likelihood was highly stressed. “Lots of money, in fact—” Stopping, he cocked his head, recognition crossing his face. His eyes softened and he smiled, flashing white teeth and a dimple in his left cheek. “Hey.” His voice was different now. Lower, quiet, like the one you used with people you knew. It was also filled with emotion. “It’s been a while.”

True story. It had been a while. But not long enough. And in the bad-news department, the dimple and smile were still attractive and charismatic as hell, but the good news was that she’d learned how to shut off her heart. She gave him a vague smile, implying she didn’t remember him. He hadn’t chased her after their kiss, and yeah, it was a zillion years ago, but hey, a girl had pride.

He arched a brow.

Ignoring this, because they so weren’t going there, she gestured that he should stand back because it was her turn at the vending machine. She pulled a wrinkled dollar from her pocket and tried to shove it into the slot, extremely aware of the weight of his stare. He wanted her to recognize him. She was still going with no thank you.

The machine spit her dollar back at her.

“You have to straighten it out first,” Eli said.

Grinding her teeth, she slapped the dollar against her thigh and ironed it flat with her hand before once again attempting to thread it into the machine.

And . . . once again, the machine immediately refused it.

Seriously, was it a Monday? Was the universe out to get her? What? Eli gestured to her dollar bill. “Can I…?” When she nodded, he took it and calmly fed it into the machine.

And, of course, it was accepted. Eli started to say something, but she held up a finger to stop him, then punched in the corresponding letter and number for the candy bar she wanted.

Oh, for God’s sake— Gripping the machine the same way Eli had, she shook it.

So she kicked it.

Her audience of one smirked. “Missy Judgerson goes to the dark side.”

Brynn shocked herself by laughing. It was her first laugh in…well, she couldn’t remember. Life hadn’t exactly been a pocket full of pilfered goodies lately.

“Here.” Her pretend stranger pulled two fistfuls of goods from his pockets. “You look far more desperate than me. Take your pick.”

She took a candy bar. And then on second thought snatched a bag of gummy bears as well.

He gave her a look.

“Hey, I’m a pint low, okay?” She stretched out her arm, revealing the Band-Aid in the crook of her elbow where they’d taken blood.

His smile faded. “You okay?”

Physically, yes. Mentally, the vote was still out. She tore into the candy bar. “I will be.”

His eyes were still the most unusual shade of gray, which should have meant they were cold, but they weren’t. They were actually very warm, and curious. And maybe she’d feel warm and curious about him too, if she hadn’t made a fool of herself with him by sporting a big, fat crush that clearly had not been returned. Add to that, he’d fooled her into thinking they were friends when they’d been nothing of the kind because he’d been part of a group with Kinsey Davis — Brynn’s arch nemesis.

Yes, apparently, she could hold a grudge for years. Maybe it’d stuck with her because she’d written about the two of them often enough in her long-ago camp journal. They’d all had to write in one every night. She actually still had hers, shoved somewhere deep in her duffel bag. She used it as a reminder of who she used to be, Past Brynn, who’d been too gullible, too loyal, too forgiving…She’d practically been a golden retriever.

But she’d learned. She was tougher now. Present Brynn was a German shepherd.

Eli’s phone pinged. He grabbed for it, stared at the screen, and looked stricken. “Gotta go.” He took the extra few seconds to empty his pockets, shoving his entire loot into Brynn’s arms. “In case you need another fix.”

And then he was gone, leaving her torn between the humiliating memories of the past and the hope that whomever he was here for would be okay. She started with the pilfered gummy bears. The sugar began to work its way through her system, giving her the courage she needed to go out and face her moms with the truth.

That, once again, she’d failed at life and let down the people she loved.

New York Times bestselling author Jill Shalvis lives in a small town in the Sierras full of quirky characters. Any resemblance to the quirky characters in her books is, um, mostly coincidental. Look for Jill’s bestselling, award-winning titles wherever books are sold and visit her website for a complete book list and daily blog detailing her city-girl-living-in-the-mountains adventures.

Keira Soleore writes for the International Examiner and Cogitations & Meditations. She enjoys connecting with readers on Twitter (@keirasoleore) and through her website (www.keirasoleore.com). Her interests include medieval manuscripts, philosophy, poetry, picture books, choir, sunshine and beaches. Keira is a pseudonym.
All Posts
PrevPreviousSwooning is a Thing of the Past
NextCharacters Who Haven’t Quite Left Me Yet by Nancy StarNext