Exclusive: There’ll Be Peace When You Are Done by Lynn Zubernis Excerpts! 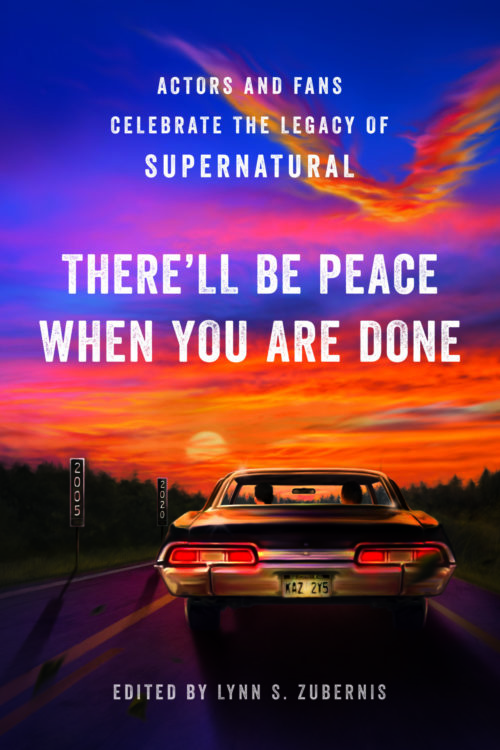 This week is the book birthday for my new book, There’ll Be Peace When You Are Done: Actors and Fans Celebrate the Legacy of Supernatural. In these strange times, we had a virtual book launch party attended by some of the Supernatural actors and fans who wrote chapters for the book – you can ‘attend’ by watching the livestream video on Alana King’s youtube channel linked below if you’re curious to hear the authors’ perspective on the book and the show (with two Registered ASL Interpreters helping us out).

This book had an interesting road to publication. I had originally been thinking about doing a book on the evolution of Supernatural, especially in terms of its depiction of female characters and in terms of representation and diversity. Then the show announced it was going into its final season, so that changed things. I still wanted to celebrate the show’s evolution as one of the important things in its 15 year history, but even more, I wanted to put together a book that could be a source of comfort and inspiration for fans as we tried to cope with its ending. Supernatural has been important to many people as a television show with characters who have inspired many fans, which means that losing it is very difficult. I wanted this book to help fans get through that loss, and be something we could always hang onto and remember how special Supernatural is. I was in shock myself about the show ending, so it took a while before I could pull a pitch together and convince a publisher to take on what was by that time an impossible task. By the time I did, we had only months to put together an entire book – which turned out to include 39 chapters!

We planned for a May release because that’s when fans would need the book the most, as they grieved the show’s ending. (The show was supposed to end on May 18, but filming was shut down with two episodes to go. The book actually went to print before filming was halted thanks to how long that process takes, so we were locked into our deadlines.) Because we had such a short timeline, some people who wanted to contribute couldn’t, or couldn’t do as much as they wanted to. As far as who was asked to contribute, I didn’t ask the actors and fans who wrote chapters for my previous book, Family Don’t End With Blood, to write for this one. They wrote their hearts out in that book – Jared Padalecki worked on his 30 page chapter for over two years! The actors I did ask to contribute to this book all had a unique story to tell. They had played characters whose journeys were inspiring to both them and the fandom, and they embodied all kinds of diversity so they could speak from perspectives that would resonate with all kinds of fans. Same with the fans who wrote chapters. Hopefully everyone who reads the book can see themselves in it.

Most of the chapters in the book are traditionally written – the authors wrote drafts, we did some collaborative light editing, but basically we wanted the chapters to all be in their own words. That was the point; that’s why the book is inspiring. A few chapters are a conversation between me and the actor, such as Richard Speight, Jr. and Gabriel Tigerman, or inspired by a conversation, like David Haydn-Jones and Adam Fergus. Jared, Jensen and Misha were working incredibly hard to finish filming the show at the time and were also pretty emotional themselves about it ending. They wanted to be included in the book, but weren’t in a place either emotionally or in terms of time to write long pieces. Jared and Jensen’s chapters include their new thoughts about Sam and Dean’s legacy, and we could have just left their chapters at that, but we wanted their chapters to really help grieving fans. So we also included some of the heartfelt and emotional things Jared and Jensen have said over the past year about the show ending, at public events like red carpets or round tables that are widely reported. We wanted to include these, in their own words, so fans could remember and be inspired by them — so their chapters would help fans as much as possible. They edited their chapters so that they said exactly what they wanted fans to know and remember in the hopes that it would help people get through a tough time. Misha was busier than anyone, finishing and touring a cookbook, Random Acts and hip surgery, so his message is short but no less heartfelt – it’s the last hopeful note at the end of the book.

At a time when helping each other is more important than ever, the book benefits Random Acts, Misha’s global charity, and SPN Survivors, a Supernatural-inspired suicide prevention non-profit, whose work is so important in the midst of this pandemic. The whole point of the book is to help people – through these charities, and through the inspiring messages of the actors and fans included in it – and we sincerely hope that it does.

Here are just a few excerpts from There’ll Be Peace When You Are Done, about how the show and its iconic characters have impacted so many of us, and what the experience of being part of Supernatural was like for its amazing cast:

The experience of being on the show itself was extraordinary. A special moment that stands out occurred during season 5, when I had to shotgun a beer and didn’t know how. (It’s on the blooper reel if you want to see it.) I had brought my sister to the set with me that day, because she loves Supernatural and of course she loves Jensen. I mean, who doesn’t love Jensen? So I said to him, “I don’t know how to shotgun a beer. It’s not my thing.” And he responds – read this in a deep Jensen-type voice – “Well, what you wanna do is, you wanna come over here and… ” And he tries to show me how to cut into the beer, where you hold it, and where you chug it from. He’s showing me and I’m learning and then I look over at my sister and she’s just trying so hard to keep it together, because she’s standing right next to Jensen Ackles! That’s priceless stuff. So he shows me how to do the beer thing. The beers on set are terrible. They smell like sulfur, and of course they’re nonalcoholic. As I chug the beer for the scene, the bad beer is flowing out the side of the can and all over my mullet and onto the floor. I have no idea what’s going on, so I just keep doing my lines. Then I look over and I see Jared and Jensen with tears in their eyes as they try to keep it together… I think that’s what Ash brought to everyone.

Playing Anna—one of my first big roles– was a huge learning experience for me. I was given the role of a meek, terrified, wide-eyed young woman—and then trusted by the incredible writers and producers to become a badass angel who would risk everything to save the world. To be honest, that sort of trust and opportunity is rare in this industry, and it’s something I am constantly striving for in my work to this day….  With Anna, I had Jensen, Jared, Genevieve, and Misha on set guiding me (whether they knew it or not) through one of my first big roles. I really couldn’t have asked for a better group. Basically, I laughed ten hours a day and did some super-serious, save-the-world acting in between the laughter.

The “Supernatural” take on family ain’t the Lifetime version. It’s dark, it’s rough, it’s painful, it’s broken. It may not be a perfect family, but it’s our family. It may not be a perfect world, but it’s our world. And I think the way Sam and Dean and Castiel choose to navigate that world and how they deal with each other along the way is inspirational to a lot of people and will continue to be an inspiration for a very long time.

Over fifteen years, Supernatural has shown it is far more than your average genre show about handsome dudes who fight monsters. The story of two brothers in an epic battle between good and evil, who continuously (re)negotiate their family bonds with one another and those deemed honorary “Winchesters,” continues to resonate with fans and likely will for years to come. The longevity of the fandom, and fans’ engagement with one another and the series’ stars both online and in person at conventions, has fostered a crucible of emotional energy that has led to social movement–style activism. This dialogue with fans has also led to more well-developed women characters and stronger story arcs. The main legacy of Supernatural, however, may be its efficaciousness in motivating people to lift each other up and try to do more to benefit their communities and the world. When it comes to saving people and continuing to fight, the SPNFamily has shown there’s always a way.

It has been a privilege to play a character like Dean who has inspired so many people, because any excuse to give up is not an excuse that is good enough for the Winchesters… I think Dean’s legacy is that he never gives up. He keeps fighting no matter what. The show carries the message to always keep fighting for each other, and that has inspired the fandom to keep fighting too, whatever fight they are facing.

I’m very proud of what we’ve done and of the story that we got to tell. Sam Winchester has inspired me, just like he’s inspired many fans… I think most of us, like Sam, probably do struggle to forgive ourselves sometimes. But I feel like Sam’s actions have been kind and sacrificial and loyal, and I have always wanted him to keep fighting – for his brother, for his family, to save people. I value that about him. The way the Winchesters have faced insurmountable odds inspires me and hopefully others to keep on working as hard as we can. 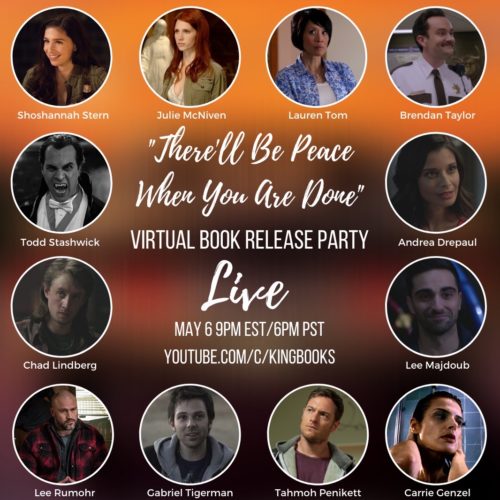 Lynn Zubernis PhD is a psychologist and university professor who has published many books about fandom and fan psychology and why it’s healthy and positive and just plain fun to be passionate about the things we love. Her most recent books, There’ll Be Peace When You Are Done: Actors and Fans Celebrate the Legacy of Supernatural, and Family Don’t End With Blood: Cast and Fans on How Supernatural Changed Lives, have powerful chapters contributed by the actors and the fans of Supernatural, the show she’s passionate about. You can also go behind the scenes of that show and explore the ins and outs (so to speak) of fanfiction and fandom in her book Fangasm Supernatural Fangirls.
All Posts
PrevPreviousExclusive: The Outlaw’s Daughter by Margaret Brownley Excerpt
NextPerfect Pairings: YA Book Covers and FlowersNext