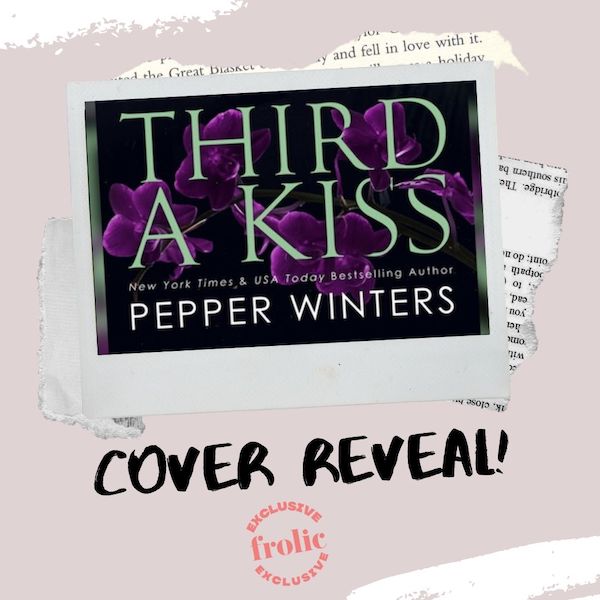 We are so excited to share with you the amazing cover and exclusive excerpt of Third a Kiss by Pepper Winters, out April 21st, 2020! 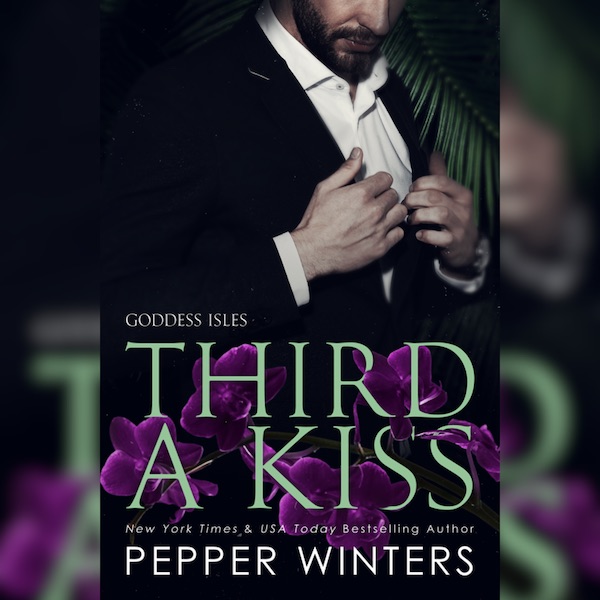 About Third a Kiss:

“There was hate once. Hate born from dangerous attraction and fate’s cruel design.

There was love once. Love destined to kill us if we didn’t surrender to our war.”

Eleanor Grace suffers an awful affliction. She’s falling for a man who doesn’t deserve her affection or her forgiveness. But there is no cure, so she does something reckless, stupid—she throws safety to the sea and leaps into danger.

Sully Sinclair suffers the same affliction. He’s falling for a goddess who will never earn his trust or his heart if he can help it. However, he wasn’t prepared for the lengths she’d go. How far she’d push to either stop such a bond or kill them both trying.

An elixir given to a monster.

A goddess running for her life.

An ending neither of them can survive. 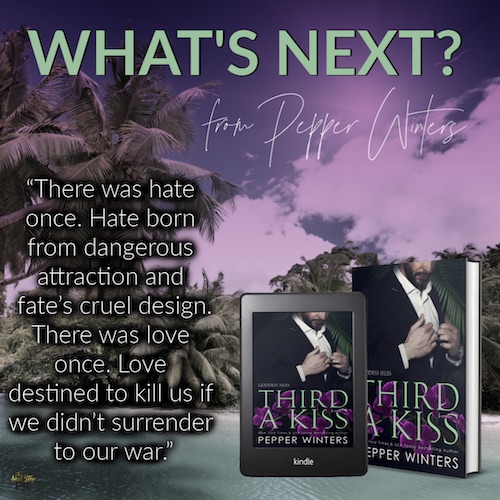 A dark, deadly growl. A snap of a snarl.

My head swooped up. My eyes caught his as he slammed to a stop, blocking the path. His suit hung in tatters. His blazer had been thrown off behind him. His shirt flayed open, torn buttons hanging off broken threads, his belt slinging haphazardly from belt loops, his fly unzipped, and feet bare from his normal pristine shoes.

For the first time since I’d arrived, Sully Sinclair glistened with sweat. His cold-blooded persona had succumbed to the island heat, dousing his skin in moisture.

My heart threw itself into torment, racing, and smoking, growing its own pair of legs and begging to run. I massaged my chest where it kicked and coughed, doing my best to stay calm.

I’d applied makeup and dressed in a gown and stared at my reflection, knowing I was sacrificing myself to a ruthless, rabid beast.

Yet committing to an idea and then coming face to face with the ramifications were very different things.

Sully took a step toward me.

As if still fighting the vapid manic urges. “Get to your villa. Lock your fucking door.”

I licked my lips at the brokenness of him, the filthy greed and feverish longing. “You came after me.”

He shook his head, squeezing his eyes closed as another wave of lust buckled his body. When he opened his gaze again, the blue glowed otherworldly, sickly, dementedly. “No. I’m—” He groaned. “I’m trying to get to my villa before…” His fists clenched. “I can’t be close to—” He raised his gaze, snarling, “Go! What the fuck are you waiting for? I told you to run. So run!”

“I’m done running.” I spread my hands. “I was coming back…for you.”

Pepper Winters is a New York Times, Wall Street Journal, and USA Today International Bestseller. With a catalogue of over twenty titles, she’s hit the bestselling lists over thirty times.

She loves romance, star-crossed lovers, and the forbidden taboo. She strives to write a story that makes the reader crave what they shouldn’t, and delivers tales with complex plots and unforgettable characters.

After releasing two books with Grand Central, Hachette (Ruin & Rule and Sin & Suffer) Pepper is a Hybrid Author of both Traditional and Self-published work.

Represented by Trident Media, her books have garnered foreign interest and are currently being translated into numerous languages, including already released titles in Italian, French, Hebrew, German, and Turkish. Audio Books for her entire back-list will be available soon

Where Romance and Pop Culture Live Happily Ever After.
All Posts
PrevPreviousFantastic Book+Main Bites from Black Authors
NextThis Tweet is the Most Wholesome Thing You’ll See TodayNext